lê thị diễm thúy’s ‘Tear the Pages Out: Fragments from the Gangster Tour’

diaCRITICS occasionally features guest blogs and reprints. This essay by lê thị diễm thúy originally appeared at Powells Books, as a feature to accompany her novel The Gangster We Are All Looking For. Her fragmentary reflections on the book’s speaking tour furthers the afterlife of her beloved 2004 novel, recently the 2011 selection for One Book, One San Diego. diaCRITICS reviewed the book in 2010 and commented upon the One Book, One San Diego selection in 2011. 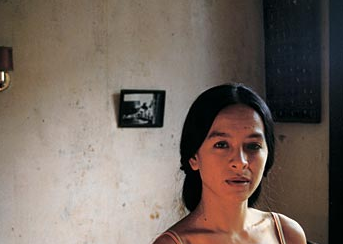 The writer is 31 years old and this is her first book. When it arrives she lays it across her lap, and runs her hand across the cover. She opens it and turns the pages. Everything about the book is clean and smooth and the words themselves lay on the page like dark polished stones shining up from a riverbed.

The reader is a Mexican-American man of about 70 years old. He wears jeans and a white button-up shirt and over the shirt stretch a pair of blue and brown striped suspenders. He introduces himself by saying, “I rarely buy books and I have never come to a reading before.”

The writer has worked on the book for close to ten years. Throughout those years she has referred to the book as, ‘the work,’ ‘the pieces of writing,’ ‘the stories,’ ‘the story,’ ‘gangster,’ and finally, and most accurately: ‘the strange creature.’

The reader is a doctor in New Jersey. She says, “I feel that I am Ba. Especially during their first night in America. How he climbed out of the bedroom window and sat outside and cried like a dog.” “When I first came here to this country,” she says, “I was grateful and excited about the possibilities. But I was also like him: I was so sad. I missed my mother and my sisters. I cried like a dog. But I could not say that then.”

The writer is responding to a question about the book’s form. Why had she chosen to tell the story in this way, non-linear, fragmentary, jumping back and forth in time and place? She says, “The book is about three Vietnamese people: a man, his wife, and his daughter. They are living in one place and are haunted by memories of their life in another. The places are southern California and southern Vietnam. What lies between these two places is an entire ocean, both literally and metaphorically. The characters have crossed that ocean, but they haven’t yet found the language to chart what has happened to them. By language, I don’t necessarily mean English or Vietnamese. I am speaking of the words or forms we struggle to find to describe our lives to ourselves. As a writer, I struggled for many years to find a form that would be true to these character’s lives, a form shaped as much by silence and absence, by time seeming to stop, to halt, as much as by it flowing on.”

The reader is a black man in Chicago, Illinois. He is driving a cab along the Lakeshore at a quarter to seven on a Tuesday evening in early June. The Yankees returned to Wrigley Field for the first time since the World Series in 1938, and the Cubs beat them! Chicago is looking good; the gold light of early evening is descending on the city and on that saxophonist playing on the corner. The cabbie turns his car radio down so he can hear the man’s music. He nods in approval and drives on, his eyes smiling in the rear-view.

The writer is asked, “How autobiographical is this?” and “Are you the girl?” She says, “I was a boat child, I lost a brother, I ran away. I was born in Phan Thiet and grew up in Linda Vista. Those things are true. I traveled through a similar geography — war and its aftermath, growing up poor in America — but my body is not the girl’s body and my memories are different from her memories.”

The reader is sitting in the audience and tentatively raises his hand. He says, “I have a question and it is not at all intellectual; it is not even related to the book: where did you get that hat?”

The writer is sitting barefoot at the Seattle-Tacoma airport. Evidently, because of the body lotion she wears, her shoes have tested positive for some trace elements that are also present in TNT. The police are called in and the shoes — a pair of red espadrilles — are thoroughly scrutinized for signs of tampering. None found, she is allowed to continue on her way, but only after writing her name, her date of birth, her place of birth, and current address into the officer’s little notebook.

The reader cleans offices at an American university. She is originally from a small town outside of Lisbon, Portugal. She calls Lisbon “Lisboa” and says of her town, “It is so small, you will not know the name. But oh, it is beautiful.”

The writer is ironing a shirt to wear to a reading. The shirt reminds her of shirts her mother used to wear in the early ’80s: it is silk and sleeveless and has a pattern of black and white zigzags, and over these, small polka dots in different primary colors. It occurs to her that the pattern looks like an abstract rendering of a zebra, as seen through a fireworks display. And what’s wrong with that? She can just imagine her mother, dead close to three years now, slyly asking.

The reader is an inmate at Folsom State Prison. A copy of the book has arrived for him, but he cannot receive it. A prison guard informs him that inmates are not allowed to receive hardcover books because drugs and weapons might be concealed in them. The inmate says, “You can take the whole thing apart. Tear the covers off. I don’t care. Tear the pages out. Just give the words to me.”

Born in 1972, novelist and performance artist lê thi diem thúy escaped from Vietnam by boat in 1978 with her father. They passed through a Singapore refugee camp before settling in Southern California. Her best known performance-work is Red, Fiery Summer, which alludes to the bombing of Vietnam by U.S. forces. Red Fiery Summer and The Bodies Between Us have both been presented at the Whitney Museum of American Art and the Vineyard Theater in New York City, among other venues.

Please take the time to rate this post (above) and share it (below). Ratings for top posts are listed on the sidebar. Sharing (on email, Facebook, etc.) helps spread the word about diaCRITICS. And join the conversation and leave a comment! Have you read The Gangster We Are All Looking For? What did you think?