The passing of a major Vietnamese dissident writer–silenced in Vietnam, acclaimed in the free world–is mourned by a friend and champion.  Nguyen Chi Thien’s story of serial imprisonment and resistance is a parable of artistic choice for a not too distant generation. 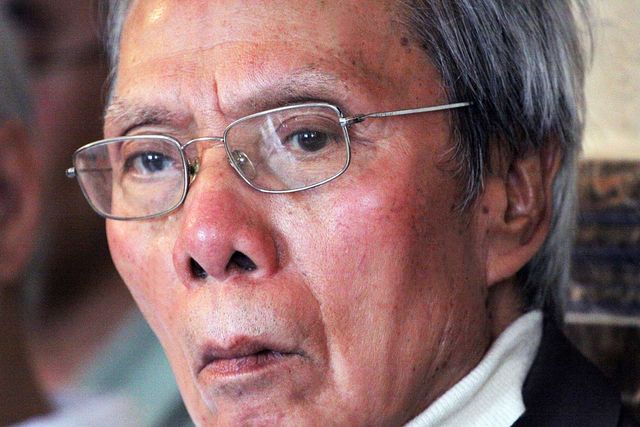 “Though death is inevitable, I could not help feeling an excruciating sense of loss as I wept! That night, I lay down with my face to the wall. I remembered the months and years together. I recalled the day we met at Phong Quang. On that dark, winter day, he stood before a red pepper plant staring at the leaden grey sky with an equally leaden gaze. On the day I said good-bye to him, as I left for Saigon on my way to the United States, he held my hands not wanting to let go, his eyes brimming with tears. Very early that morning, as I drifted back to sleep, I dreamed of the stars, azure blue sails flying in the wind across the Milky Way, leading his soul to the Merciful Almighty! One day, when I return to Vietnam, there will be nothing I can do but stand in silence before a cattle-trodden mound at the far end of a hamlet, where his body has been laid to rest.” (Nguyễn Chí Thiện recalls his jail-mate, poet Phùng Cung of the 1956 Nhân Văn Giai Phẩm movement – a political controversy over literary censorship, in his short autobiography published in 2005 by the Vietnam Literature Project)

Of all of Vietnam’s prisoners of conscience, he had one of the longest overall sentences, spending a total of 27 years in various prison camps in North Vietnam.

Born in Hanoi in 1939 to a family of 6, his elder brother, Nguyen Cong Gian, enlisted in Vietnam’s National Army and was the only family member to move South, later rising to the rank of lieutenant-colonel in the ARVN. After 1975, Cong Gian would also be imprisoned, spending 13 years in Hanoi’s reeducation camps. In 1954, Thien initially welcomed uncle Ho’s Viet Minh soldiers as liberators, but he and his family later regretted their earlier and short-lived exuberance.

In 1960, while substituting for a friend, he explained to a classroom that the Soviets did not end WWII by defeating the Japanese army, as stated in their textbook; but rather the United States and the two atomic bombs dropped on Hiroshima and Nagasaki. This landed him in prison for three and a half years.

In prison he began composing his poems in his head, committing them to memory by reciting them to his jailmates. In 1966, he was incarcerated again, this time for more than 11 years because his ‘reactionary’ poems circulated in Hanoi and Hai Phong. Released in 1977, 2 years after the fall of Saigon, he lived under constant police surveillance.

In 1979, fearing that he might not survive a third prison term, he was determined to smuggle his poetry out of Vietnam. Thien boldly entered the British Embassy in Hanoi, requesting asylum. Though his request was denied, British diplomats agreed to deliver his collection of 400 poems out of Vietnam. Thiện walked out of the embassy and spent the next 12 years in prison, mostly at the infamous Hanoi Hilton.

His poetry first appeared in the U.S. in the early 1980’s under the title “A cry from the Abyss”, before being published as “Flowers from Hell”. The collection was translated into English, French, German, Dutch, Spanish, Chinese, Czech and Korean. Thanks to his international following, Thien won the Rotterdam’s International Poetry Prize in 1985. In 1988, he also won the “Freedom to Write” award from Pen International.

After the collapse of the Soviet Union, he was finally released in 1991 and resettled in the U.S. in 1995, the same year he was honored by the Human Rights Watch.

Like many Vietnamese, I took up his cause as a student at Cal in the early 1980’s. We organized poetry recitals on university campuses throughout the Bay area to raise awareness about the prisoner-poet and Vietnam’s repressive state of morose socialism. This was the beginning of our friendship.

I am deeply sorrowed, not only by his passing, but also by the loneliness and despair that he and many exiled Vietnamese dissidents must have felt. They were denied the possibility of visiting Vietnam and stood watching Vietnam make its great leap backward as the Party continues to persecute and silence the voice of conscience, delivering heavy jail sentences to today’s dissident bloggers (a total of 26 years for bloggers Điếu Cày, Tạ Phong Tần, and Anh Ba Sàigòn). Did he resign, letting go of his world where hope is dying and tomorrow is slow in coming? This past June he discussed the French poem Élegie Septième with me, ignoring its prophetic message expressed by his dying wish:

Tell me, tell me, will I ever be cured

Of this thing in my heart

Can never be cured of its purity

Friend, who amidst the tears, smiles

Must I die once again?

Are you crazy dear friend?

You do know… We are going to Heaven…

O Love, in the blue sky,

Do tell? What will you say to the Good-Lord?

I will say, that on earth

There will be azure harps

What else my Love,

will there be in Heaven? More… More…

My friend, I am your Love.

In Heaven, there will be our love.

Tell me, tell me, will I ever be cured

Of this thing in my heart?

Can never be cured of its purity.

When America abandoned the South to the Communists

In the midst of prison labor, disease, hardship

Poetry still shoots, with plenty of power and bullets!

Because it knows tomorrow is far yet bright

That it is not reserved for their evil forces

Although despair may spread

Nations and people ruminate in the dark plaintive night

Tricking a heart that “radiates love and respect” into helping a

By clearly seeing the true forms of Communism

All will disintegrate, but the infinite power of poetry

Will conquer both time and space

And break down the rusty steel and metal of the enemy!

My verses are in fact no verses

They are simply Life’s sobbings

The sound of dirt burying dreams

The sound of hoes exhumating memories

The chattering of teeth in cold and misery

The pointless contractions of an empty stomach

The hopeless beat of a dying heart

The voice of impotence within a collapsing earth

All the sounds of a life not worth living

Even death is so bad, it can’t be poetry

There is nothing beautiful about my poetry

There is nothing noble about my poetry

My poetry is made up of terrible things

Like the Party, the Youth Union, the leaders, the Central Committee

It is as real as prison, as hunger and suffering

My poetry is for simple folks

To see through the black heart of the Red devils.”

Are you not the child?

Are you not the child?
Whose father regrouped 10 years ago?

Your stepfather is the man with the dark olive skin,

He is the comrade secretary where your mother works?

I’m your father’s prison friend, from another province

A bit of quinine, a little black sugar to eat!

Your Father wants to reassure your mother, she mustn’t be embarrassed

He understands the situation, he loves her and you both
Please stop crying!
Your father will come back and send you to school,
He will buy you sandals to walk in…
You will be the Red-Scarfed child
Uncle Ho’s well-mannered child, would you like that?

Oh world! Who would have imagined?

Throughout my prison journey
I have met thousands of children like him!

If Nguyen Chi Thien’s story is both extraordinary but also typical, how many among us has been touched by Vietnamese poets, writers, artists who have labored in obscurity?

Landscape Memory, a three-channel video installation by artist and organizer Boone Nguyen, explores the complexities of diasporic remembering as Nguyen returns to the rural village where his extended family lives in Vietnam. The video documents and juxtaposes varying ways of remembering and honoring the dead, such as cleaning burial sites and burning incense, with bomb crater-turned-lakes, reclaimed over time by nature, in addition to the act of the journey itself.
Read more
Reviews

The Gutter Spread Guide to Prayer rejects the narrative of healing after the death of a loved one, of getting over grief. Instead, one learns how to “hold the grief//like an attic of heirlooms” or set it down “like a parent does an infant.”
Read more
Art

From The Missing Piece Project's virtual dedication for April 30, 2020: "Imagine this: a queer future, a decolonial future."
Read more