A freelance photographer born in 1986 in Hanoi, Maika Elan (aka Nguyen Thanh Hai) has produced a series of intimate and compelling photographs of the private lives of gay, lesbian, and other non-heterosexual couples in Viet Nam, as part of a long-term project to document the many different couples within the country.

diaCRITICS is moved not only by her aesthetics by also by her intention. Maika Elan explains it this way: “I want to tell the story by going into the great depth of love and intimacy. I want to avoid stereotypes of homosexuality. I also want to avoid the tabloid/shocking news style. I want to show simply how they care and love each other in daily activities. More strongly, I want to show that their loving and caring for each other is nothing deviant. They are all normal and natural behaviors, attitudes, thoughts and emotions. Love is beautiful, and we can only claim ourselves supportive of homosexuality when we accept their love—and see it beautiful as it naturally is!” About the acceptance of the LGBTQ community in Viet Nam, Maika Elan comments, “People like to say they are open-minded but they don’t act like it.”

We originally came across the below interview with the photographer by Elektra Kotsoni of Vice, and we’ve reprinted it here with permission. The end of this post contains information about Maika Elan’s agent and upcoming exhibits.

In August, diaCRITICS also reported upon the first LGBTQ pride parade in Hanoi. 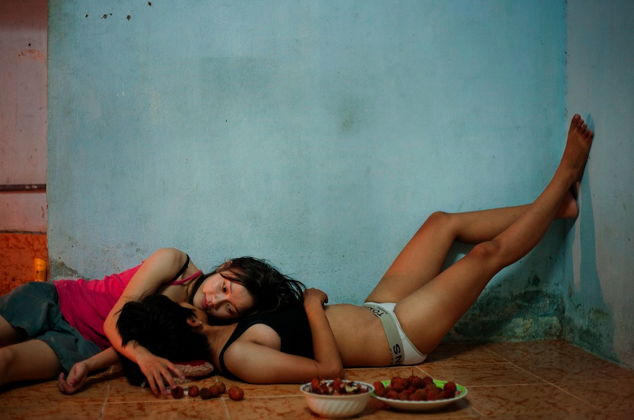 About a month ago, about a hundred bike-riding homosexuals pedalled through Hanoi in what would come to be seen as the Vietnamese capital’s first ever gay pride parade. Not too many eyebrows were raised by that, at least in our little Western corner of the world; I guess we all thought it was about time those guys on the other side of the world caught up with people’s right to hang out with reproductive organs that resemble their own. But then one day later, rumours began to circulate that the Vietnamese government was actually considering the legalisation of same-sex marriage. Considering that Vietnam is still operating under a communist regime, this is sort of newsworthy, don’t you think?

I thought so, which is why I got in touch with photographer Maika Elan, who spent last year photographing Vietnam’s gay couples in their most intimate moments. She sort of stood me up on the day of the interview, but that’s OK because she’s the sweetest Vietnamese with a mushroom haircut I’ve ever met.

VICE: Hey Maika, why did you stand me up?

Hi, I’m really sorry. I got up this morning to go to the UK Embassy and sort out a visa – I’m visiting in a few days to prepare for an exhibition – and ended up spending the whole day there. Which I should have expected but… anyway.

Okay, I hate bureaucracy too, so I forgive you. So, tell me about your project: Gay people in Vietnam. Why is that an important enough subject to photograph so extensively?

Well, the thing is people in Vietnam there is talk of legalising gay marriage. This would make Vietnam the first Asian country to do so, so it’s a big deal, but I don’t see it happening any time soon. People like to say they are open-minded but they don’t act like it. For example, every time a story about a gay couple is in the press or on TV, either the faces are blurred or they pose with their backs to the camera. And those stories are almost always to do with drugs, AIDS or some sort of sexual scandal.

When it comes to movies, homosexuals are either idealised or, again, presented as sexual deviants. You never see the actual people. You don’t see that they are real people. I thought it’d be nice to change that. 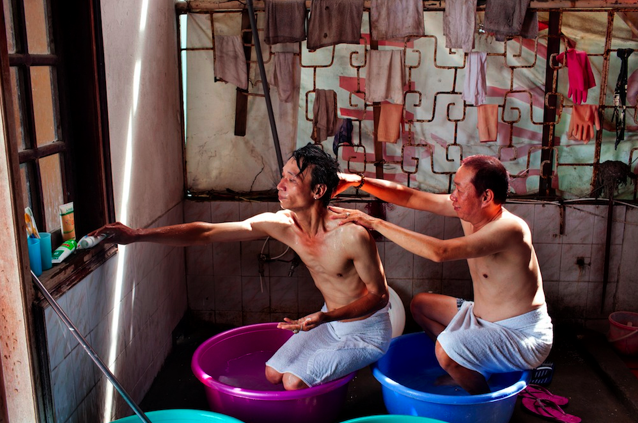 No, but a lot of my friends are. And they have known from an early age, and they are trying to live their lives as openly as possible. So the hypocrisy still bothers me.

Have you ever witnessed any expressions of homophobia against your friends or subjects?
Nothing too aggressive, but it is still impossible for a gay couple, especially if they are men, to engage in the simplest displays of affection without passers-by pointing at them. It just gets extremely awkward. For instance, I went to the flower market with this couple I was photographing, and they were just walking around holding hands and flowers, and everyone went berserk. A crowd gathered around us, and people kept pointing and saying, “No, you cannot do this here.”

No gays at the flower market? That’s weird. How did you go about finding your subjects in the first place?

I had been in touch with ICS [their online account has been suspended for some reason], which is the only agency for LGBT rights in Vietnam and it was through them that I found out about this gay and lesbian-only hotel in Hong Kong. So I went there, and at first I took great care to only take general pictures of the hotel because I wasn’t sure how welcoming the patrons would be. But turns out everyone was very welcoming; people would actually approach me and ask me to take pictures of them with their partners in their rooms. So that was great.

When I returned to Vietnam, I did a bit of research, got in touch with ICS again, explained what I was looking to do and convinced them to get in touch with a few people for me. After that, one couple would just introduce me to another, we would meet for coffee and then I’d follow them around for a day, or two days, or a week. Some people got in touch with me on their own too, seeing their participation as a way of coming out to their families. 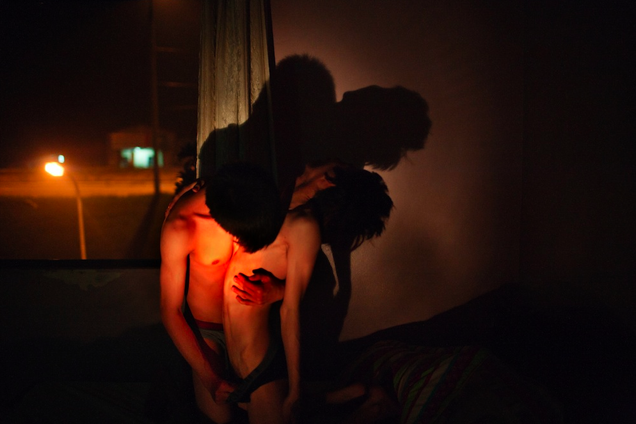 The photos are very personal, and I would imagine that by facing so much prejudice these people would be wary of letting a stranger into their homes. How did you get them to feel so comfortable?

I felt really comfortable. Maybe that’s one reason. Still, just by my being there, in their private space, I disrupted their whole energy. Nothing was absolutely natural any more, and that was annoying. I had to work hard for those glimpses of natural moments; the moments when they accidentally forgot that I was there.

I had to be a little clever, too. So, usually, once I entered a house, I would ask them what the favourite room of their house was or what it is they enjoy doing together most, and then let them go at it while I took pictures. Later, I would say that they could rest and that I wouldn’t be taking any pictures. I would sit in a corner and pretend to do my own thing so they would relax, and that’s when I was really able to photograph them. 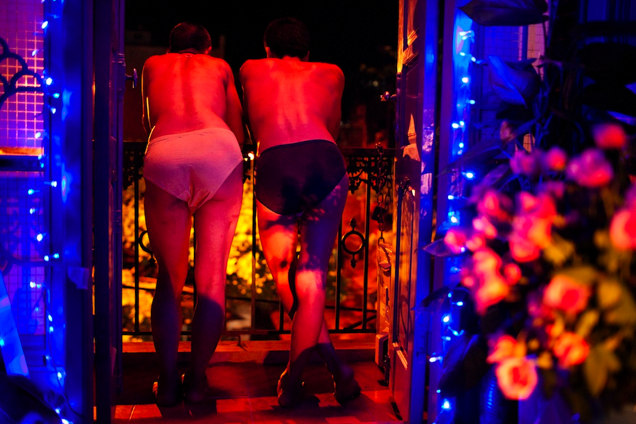 Sneaky. Is there one couple you are particularly fond of?

There are these two guys, who are both married with children and are also HIV positive. Their families know about their relationship with each other now, and even though they live with them, they also have a space of their own. And on special occasions, like the lunar New Year, the three families always get together and celebrate, which I just think is fantastic.

Another thing I love about them is their appearance, which clashes so badly with their general aesthetic. They are both big, strong-looking men, covered in tattoos, but their house is this really romantic, nest-y space covered in floral patterns and flowers. But it’s a case of juxtaposition with them in general. They both have really dark pasts, and they are still using drugs for example, but they are the most loving people I have ever met. Even their sharing of a needle became, in my eyes, a gesture of love. I know this is not the most ethical thing to say, but in cases like this I found I had to try to disassociate such an act from its negative connotations, and assume that this is their own way of expressing their love, not destroying each other. 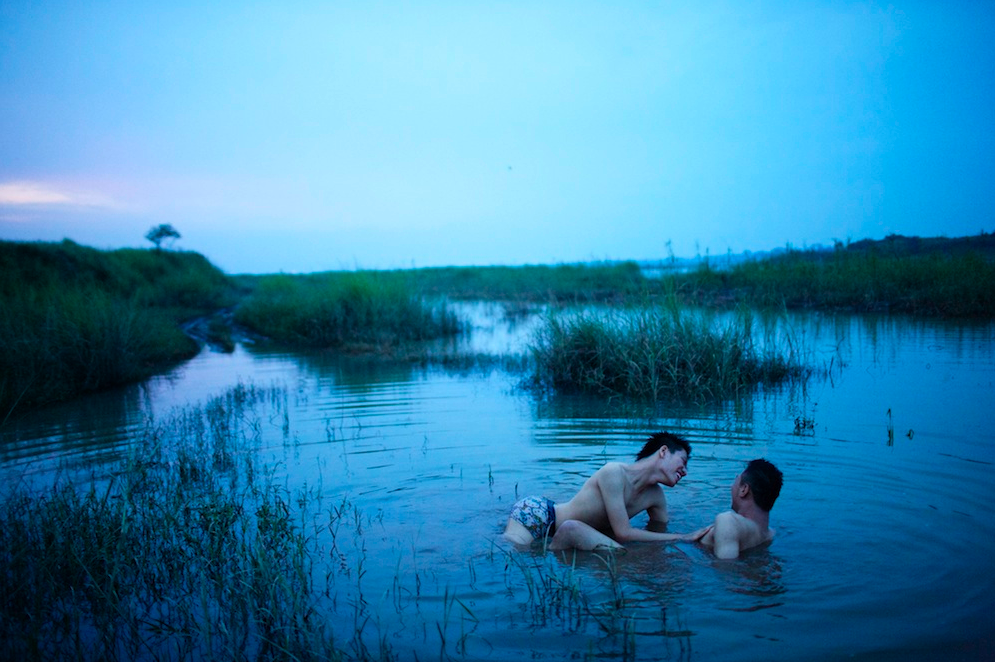 Okay. To end with, do you think gay marriage will be getting recognised in Vietnam any time soon?

I don’t really see it happening, no. The problem is that ICS, the organisation I mentioned before, is the only agency catering to LGBT rights. They do so much work, hold all these events to raise awareness and whatnot and they might have the best intentions, but things are naturally at their earliest stage. Some time ago, for instance, they staged a public marriage proposal and wedding in a school. When I contacted the couple, in order to photograph them, turns out they weren’t a real couple; it was only a publicity stunt.

That’s the first time I hear of a publicity stunt with a cause. Why did they not get a real couple?

Maybe they couldn’t find people who wanted to come out in such a public way. Then again, there is this whole bunch of people that agreed to be photographed by me. Go figure.

Maika Elan is the nickname of Nguyen Thanh Hai, a freelance photographer born in 1986 and based in Hanoi, Viet Nam. She is currently in the process of turning this project into a book. In 2010, she received the double prize awards for best photo essay and best single photo of the Indochina Media Memorial Foundation workshop.

Maika is represented by MoST.

Please take the time to rate this post (above) and share it (below). Ratings for top posts are listed on the sidebar. Sharing (on email, Facebook, etc.) helps spread the word about diaCRITICS. And join the conversation and leave a comment! What have you observed about the acceptance of LGBTQ individuals and couples in the Vietnamese diaspora and/or in Viet Nam? Do you know other projects that humanize this marginalized community in a way that could lead to increased acceptance and respect?