Released in April 2012, Lan P. Duong’s Treacherous Subjects: Gender, Culture, and Trans-Vietnamese Feminism reads Vietnamese film and literature through the notion of collaboration and through the lens of transnationalism and feminism. It offers a gendered analysis of the loyalties and shifting alliances of Vietnamese artists caught between opposing forces of nationalism, patriarchy, and communism. This fascinating work was previewed by diaCRITICS not too long ago. Below we’re reprinting a review of Duong’s book alongside her own written reflections on doing archival work in Việt Nam, which sometimes “poses more questions than it answers.” The following article originally appeared at Moving Image Archive News. 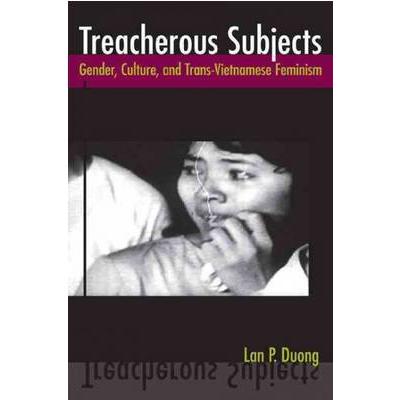 In her book Treacherous Subjects: Gender, Culture, and Trans-Vietnamese Feminism, issued in April by Temple University Press, Lan P. Duong, an associate professor of media and cultural studies at the University of California at Riverside, takes feminist perspectives on post-Vietnam war era filmmakers Tony Bui and Tran Anh Hung; filmmaker, writer, and composer Trinh T. Minh-ha; and various other filmmakers and writers working in Vietnam, France, and the United States.

Duong shows how history has shaped the loyalties and shifting alliances of Vietnamese artists caught between opposing forces of nationalism, patriarchy, and communism.

She told the campus publication UCR Today, last year: “Collaboration is central to a Vietnamese history marked by foreign occupation in which the Vietnamese have had to resist or comply with foreign powers. ’Treacherous Subjects’ pivots upon the dual meaning of collaboration, as a collective artistic endeavor or a political act of treason.” Her research, she added, identified ways that collaborations have been viewed “either as acts of feminine betrayal or masculine loyalty to a nation the Vietnamese at home and abroad imagine in familial terms.”

Duong is now working on a second book, Transnational Vietnamese Cinemas: Imagining Nationhood in a Globalized Era, which will examine Vietnamese cinema from its inception to the present. She was awarded a 2011-2012 Fulbright Fellowship to pursue her research. She is examining how Vietnamese nationhood has been realized on film and how changes in Vietnamese cinema during the last 50 years illustrate the processes of postcolonial Vietnam’s reemergence as a nation.

She told UCR Today: “These are important questions to pursue because iconic images and films about Vietnam have narrated a particular story to the West about Vietnam: the country is primarily viewed as a country of war,” Duong said. “While many books have dealt with how other peoples and nation-states have understood Vietnam, few explore the ways that the Vietnamese filmically imagine themselves in relation to their own history. Film is now a foundational aspect in everyday and academic conversations about art, the state, and culture. In Vietnam, scholars and students of film are interested in discussing the transnational aspects of Vietnamese cinema as well as its postcolonial past.”

Her new book, she said, would analyze aspects of gender and history in Vietnamese cinema against a backdrop of wars with France and the United States, national reunification in 1975, and economic reforms begun in 1986. “Portrayed as sacrificial mothers, treasonous prostitutes, or waiting wives, women in Vietnamese films reflect the historical roles they have played on and off the battlefield during times of war and peace,” she said.

Part of the history she describes in her current book is the formation, in 1945, of a nationalist Vietnamese film industry, which in recent times has had to adjust to such forces as globalized markets and a domestic audience that has increasingly demanded popular products. Researching the history proved quite difficult, as she describes here.

Photo by Carlos Puma, courtesy of University of California at Riverside

During my last days of doing research for my book, Treacherous Subjects: Gender, Culture and Trans-Vietnamese Feminism, at the Film Institute in Hà Nội, I watched a Vietnamese film called Trận Mộc Hoa (1945) on a small editing bay. Filmed during the anti-colonial resistance movement by one of Việt Nam’s most esteemed directors, Mai Lọc, the film is one of the few surviving films of this time period. Many film reels in Việt Nam were, in fact, destroyed or damaged during Việt Nam’s long history of war with the French, Japanese, and Americans. Since 2002 I have watched many films at the Film Institute and have paid hefty fees (for foreign scholars who come to the Institute without a Vietnamese institutional affiliation, the cost of watching a film reel in a screening room was $20 per hour). While I have screened films of all kinds – documentary, animation, and feature films – this particular film stuck in my mind, especially because the existent copy I was able to screen was an internegative of the film. Watching the film through the small, editing screen, I could only make out vague images and figures in blurry black and white. While similar to other propagandistic films about the anti-French colonial resistance, Lọc’s film was particularly moving because of its rich symbolism. In its present condition, the film was without sound and the images of revolution seemed archaic but also ghostly. Watching Trận Mộc Hoa in this way was a doubled sign of the poor material conditions under which the film was both made in the past and now screened presently.

I take this moment as further symbolic of how the Vietnamese film archive is itself an experience of presence and absence, positive and negative. What is present in the state-run archives is a sanctioned, black-and-white film history that emphasizes revolution, sacrifice, and victory; absent are those films that run counter to this official version of Vietnamese history. This includes southern Vietnamese films produced during the American War, diasporic Vietnamese films about the refugee or reeducation experience, and many colonial films produced before the founding of the Democratic Republic of Việt Nam in 1945. Compounding these omissions is the fact that film preservation is still a developing art in the country. Finally, the Film Institute is also very particular about allowing foreign scholars like myself access to the archive’s holdings. When I asked about their holdings, for example, I was told several times that some of the films are too politically sensitive and are not accessible or even found in Việt Nam. As a researcher in the country’s foremost and accessible film archive, I found that this site poses more questions than it answers.

While working on the book, I also went to Paris, Aix-en-Provence, and Avignon to visit their archives as they related to film, colonial documents, and photographs. I found it immensely enriching to review the archived documents surrounding a burgeoning film culture in colonial Việt Nam. However, these archival spaces only served to dramatically contrast with the kinds of spaces I visited in Việt Nam. My archival experiences in Việt Nam are an index of how film scholarship in the country is underdeveloped and uneven, mired in bureaucratic and financial problems. Within a Vietnamese context in which world cinema, film books, and even some classic Vietnamese films are hard to find, an academic film culture has yet to find firm ground in this postwar country. The myriad conversations I had with students of film and writers and directors in the country only confirm this.

Nonetheless, the research I conducted for this book encompasses these experiences as well as many others. While film institutes in Việt Nam were difficult to access, my access to people (directors, actors, writers, and producers) was boundless. I was able to interview and talk with some of the most famous cultural producers in Việt Nam. They included Đặng Nhật Minh, Dương Thu Hương, Nguyễn Huy Thiệp, Lê Hoàng, and Vũ Ngọc Đãng. I was privileged to be privy to their lives, work, and personal stories. Indeed, such moments were the highlights of my academic career and animate the strands of narrative and history that are found in my book, Treacherous Subjects: Gender, Culture and Trans-Vietnamese Feminism.

Please take the time to rate this post (above) and share it (below). Ratings for top posts are listed on the sidebar. Sharing (on email, Facebook, etc.) helps spread the word about diaCRITICS. And join the conversation and leave a comment! Have you read the book yet? Thoughts? How else are transnationalism and feminism relevant to Vietnamese (and diasporic) filmmakers and writers?