Have you ever thought that such a basic form of communication as a text could be used as a tool to spread awareness of injustice on a nation-wide scale? In this article by Andrew Lam- well-known Vietnamese-American writer, web editor, and journalist- tells us how the rise of cell phones in Vietnam has impacted the way information is circulated amongst the general population and on a web-based scale. 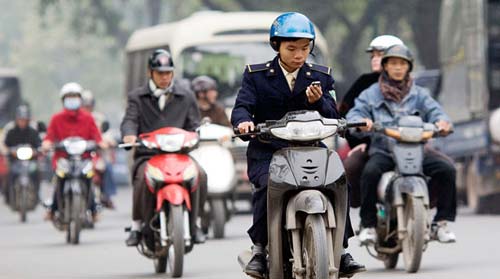 Vietnam, a police state where freedom of expression can come with a multi-year prison term, is awash in cell phones. Whether for talking, texting or taking photos, Vietnamese are buying up mobile devices at a rate exceeding the country’s own population.

A sign of the communist nation’s rising affluence, it is also undermining the state’s monopoly on information.

For years Vietnam has been a major producer and exporter of cheap cell phones. In 2010, it reportedly exported $2.3 billion worth of phone sets. Two years later, that figure jumped dramatically to $8.63 billion, up 122 percent from a year earlier.

Now, with phones available for as little as $20, ordinary consumers are buying up sets that would otherwise have been bound for foreign shores.

According to the latest statistics reported by TechniAsia, there were 145 cell phones for every 100 Vietnamese in 2012. For a country “whose population is just over 90 million,” it adds, “that amounts to more than 130 million mobile phones.”

And buyers aren’t limited to the middle class. Everyone has them, from elementary school kids to impoverished pedicab drivers. Teenagers have them, too, of course. On motorcycles, Vietnamese chat on their mobiles while weaving dangerously through traffic with one hand on the handlebar. They don’t even turn them off in movie theaters. In cafes, at restaurants, they have a rude habit of talking to you while looking down to check and send messages.

For the government in Hanoi, which maintains a vigorous Internet firewall similar to the one in Beijing, it’s a troubling trend.

Because beyond the daily chitchat, Vietnamese are increasingly using their hand held devices to document and share scenes that authorities would prefer remain out of the public spotlight. Police wrongdoings are routinely reported, tweeted and shared online. Protests against police corruption and government land confiscation, and even against China’s expansionism in the South China Sea, are now organized by cell phones.

A case in point: The world-renowned venerable monk Thich Nhat Hanh, long exiled in France, was given permission to visit his homeland in 2005 and he decided to build a monastery. Called Bat Nha in Lam Dong province, the monastery grew quickly in fame and many young people flocked to it.

But the enthusiasm threatened local authorities, who feared a Vietnamese Falun Gong-style movement. The result was a government-sponsored mob attack in October 2009 that resulted in the injuries and arrests of monks and nuns and eventually the demolition of the newly built temple and dormitories.

While mainstream news in Vietnam carried little information regarding the event, it was the cell phone that carried the day: Witnesses texted information and sent images of arrests and the demolition of the monastery. The story spread around the world.

Vietnam came out of the Cold War and ran fast and furious into the information age. Once upon a time, owning a fax machine could get you arrested. When it came to information manipulation and control, the communist regime once ran an impeccable machine.

“The growth of the Internet is endangering the government,” Le Quoc Quan, an internationally renowned lawyer and democracy activist whose popular blog pushes for a multiparty system and more human rights, told the Associated Press last year. “People can actually read news now. There is a thirst for democracy in our country.” Vietnam convicted 14 bloggers and democracy activists last week for plotting to overthrow the governing and some received 13 years jail term. Quan was arrested not long after his interview.

More and more people are blogging their frustrations and anger. But whether or not the general population does in fact thirst for democracy and want revolution is not clear. It’s a citizenry that has no organized opposition, no charismatic leadership that could challenge the status quo, and no serious conversation on a new national direction.

And despite the urgings of leading activists like Dr. Nguyen Dang Que, who before his arrest in 2011, posted online a call for young people to use their cell phones to make a “clean sweep of Communist dictatorship,” it’s far from certain that ordinary cell phone users perceive the new technology as a potential tool for revolution ala Arab Spring.

What is clear, however, is that the wind of change is blowing: There’s a growing collective discontent against injustices and corruption, and the new communication architecture has loosened the tongue of the general population. And the more informed, the more restless they become. Whether they know it or not, by sharing and swapping information on a national scale the Vietnamese are making a revolution happen, one text at a time.

New America Media editor, Andrew Lam is the author of  “Perfume Dreams: Reflections on the Vietnamese Diaspora” (Heyday Books, 2005), which won a Pen American “Beyond the Margins” award and where the above essay is excerpted, and ” East Eats West: Writing in Two Hemispheres. His next book, ” Birds of Paradise Lost” is due out March 01, 2013. He has lectured and taught widely at many universities.

Please take the time to rate this post (above) and share it (below). Ratings for top posts are listed on the sidebar. Sharing (on email, Facebook, etc.) helps spread the word about diaCRITICS. And join the conversation and leave a comment! What do you think about the cell phone revolution happening in Vietnam right now? Do you see this type of outlet happening in your community? Do you have your own blog where you post where you share our opinions about current events?

Bao: My parents loved Vietnamese arts and poetry but knew they lived in a culture that doesn’t value that. And yet here they had a son who was going into art in the English language, and they feared for my survival, which is a pressure a lot of people don’t understand.
Read more
In the Diaspora

Socio-cultural, literary, and political news and events relating to Việt Nam and to the Vietnamese diaspora. ■ News from the Diaspora ■ ►How a boy from...
Read more
Essays

I think Hollywood has and still most of the time employs their friends from “the old boys’ club,” people who look alike and think alike and have similar views about women. This will only change when Hollywood actually values true inclusion, especially when so many studies and articles show doing right by marginalized groups equals a ton more loot at the box office.
Read more