[In Part 2 of a 3-part post series from Dao Strom/The Sea and The Mother, regarding her hybrid music-literary project, We Were Meant To Be A Gentle People (East EP). This post includes a music video for one of the songs on the EP, “Origin Tale,” plus some related images and musings.]

The birth event, the crossing, the passage across the now-new threshold—all involve something upheaved, abandoned, wrought or obliterated in their wake. A violence of movement. The word “cataclysm,” if you trace it back to its roots, yields the expected diluvian references—from the Greek kataklysmos (“deluge, flood, inundation”); from kataklyzein (“to deluge”); from kata (“down”) + klyzein (“to wash”). Cataclysm is born of water and washing(s)—(clean or away).

The cataclysm of water also plays a roll in our story. The ocean that bore us (mythologically), also transported and separated us.

Enter autobiography: I was 2 at the Fall of Saigon, and I left Vietnam in April of 1975 with my mother and brother. I remember nothing of it. But somehow, as far back as I can remember, I always understood – whether or not I understood the particulars – that there was a rift behind us. Something was damaged; we had walked out of some gray or ruined place or state of being. The first childhood dreams I can recall were nightmares: being abandoned by my mother, or going to search for her with my brother and coming upon a woman who was wild and menacing; one dream in particular involved going into a public bathroom in a deserted cityscape, debris and rubble surrounding, and the walls of the bathroom being of tile, salmon-pink, cracked, where at first I am with my mother and then she is gone and I go back out crying and searching for her. The sky is dark and full of bruised purple clouds. These scenes are apocalyptic. For some reason scenes of apocalypse, of structures under construction (or in the midst of de-construction), abandoned lots, stark, slumbering landscapes only bleakly inhabited, to a degree have always resonated with me. 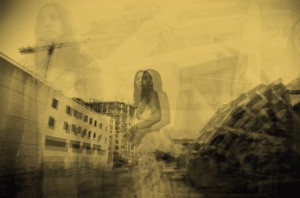 Maybe this affinity for scenes of post-destruction is due the general lament of a modern world-view, a consequence of post-industrial paradox. But I also fault Vietnam. Not the country itself, not the culture exactly, but the whole cataclysm of it—which our particular diaspora sprang from; the whole contradictory, hard-to-grasp, lingering-but-overlookable condition that is the postwar inheritance/disinheritance of “Vietnam,” whether you knew her as a war, or a home, or a past you never truly knew, or as a hell-ish, egregiously televised debacle of the late 20th century. As an example; a strategic bungle. Or as a myth; a lost under-recognized something that could’ve been something else. We carry this in our recent DNA.

A friend of my mother’s—one of the first-generation (who was young in Vietnam pre-1975)—puts it another way. He says there has not been a time like this in the history of the Vietnamese people in over 1,000 years. Think of this: For 1,000 years, we fought wars against invaders, we defended and inhabited the soil of our motherland; then, in 1975, we began to leave. Never before in our history have so many Vietnamese left Vietnam. In his words: “This is an exciting time to be a Vietnamese. The first time for the Vietnamese people.” Sitting on a couch in the nice suburban lake-front house in Seattle where I am visiting with friends of my mother’s, far up the Pacific seaboard, nestled in the the northwestern landscape of tall firs and misty perpetual rainfall, we are having this conversation. Thousands of miles from the past and the past land we still, each in our ways, wrestle with. I say, “It’s time for a new mythology.” And he says, “Yes.”

[There is more to this story, and maybe I will tell it another time.]

What stays with me, though, is this notion of the identity of a people shifting for the first time in a thousand years. Certainly it’s nothing new—this story of exodus and a people separated from their ideal land; the world over knows this particular myth—but the literal arena of our divergence has been transposed to ‘be read’ in different “keys” of landscape now. Where once it was just mountains and sea, north vs. south, now the dichotomy is challenged; multiplicity enters the picture. The distance has physically expanded to include a vast configuration of geographies—scattered, global, varied. This is what really captures my imagination. The movement in between, the spaces in between, the processes of transition and transformation, the ambiguity of becoming… Where do we go from here? Who will we be next? And who are we now that we’ve surrendered the fight (that we – nationalistically – so prided ourselves on never relinquishing, even the times we lost)?

What did we really lose? What did we let go of? Was it necessary? Was it for the better, or worse? And does that matter? Is it even assessable?

The act of traveling between places, and hence the act of emigrating/migrating is a humbling passage, I think. It requires relinquishing—what you thought you knew before, what you accepted were the norms and bounds of perception, culture, self, etc.

I think we are still forming our new shells, and hence our new selves. Water and motion are still so much a part of who we are.

I was conscious that the readership would be much broader and unfamiliar with the historical and political context against which much of Cabramatta’s gangs emerged, became Australia’s heroin capital and infamously led to Australia’s first political assassination.
Read more