In light of the anti-Vietnamese rhetoric that emerged from the recent elections in Cambodia, Sonny Le shares his personal experience witnessing the brutal massacre of Vietnamese people during the Cambodian Civil War as a poignant reminder for the people of Cambodia to resist the revival of a hate-filled propaganda.

My mother grabbed me and my younger siblings by the collar, dragging us out of bed in the middle of night. We were half asleep, bare-footed, crying hysterically as we ran to the back of the house towards the corn field.

There together with a few cousins, my paternal grandparents, aunts and uncles, we stayed until morning when it was clear that it was safe to go back into the house. This was the summer of 1977. I was 12 years old.

The villages and towns along the Cambodia-Vietnam border, Takeo Province on one side and An Giang Province on the other, have been home to my father’s large extended family since the mid-19thCentury or so. I grew up hearing Vietnamese and Khmer greetings interchangeably. Both prahok and fish sauce course through my veins.

We were farmers and fishers native to the region. We crossed the border without passports. Ethnically we were Vietnamese, but many also self-identified as Khmers, either by birth or through marriage.

Growing up I would occasionally hear the adults used the phrase “kap Yuon,” but never quite understood what it meant until the spring of 1970. All of a sudden we were forbidden to go to the river. For kids the river was an endless source of fun, from fishing to taking a dip on a hot day. (Kap means cut or chop and Yuon refers to ethnic Vietnamese, often in derogatory manner, akin to the ‘N-word’ in the US.)

Of course we snuck down to the river to find out why we couldn’t. There we saw bodies, headless and dismembered, including women and children, floating down from Cambodia. Many had been tied together to long bamboo sticks. Some even had stakes driven through their bodies like a snakehead fish ready for grilling. 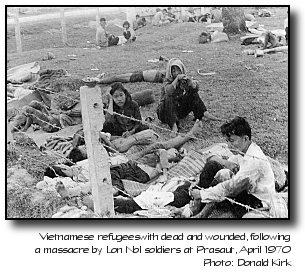 At the same time relatives began to arrive by boats in large number. They had either been forced out or run for their lives as Lon Nol regime’s crazed soldiers went on Vietnamese killing sprees or kap Yuon. All told, thousands were killed and some 200,000 were expelled. The majority of these Vietnamese, like my relatives, had been born and grew up in Cambodia, the only country they knew.

Prior to the summer of 1977, the border village next to Cambodia had been evacuated after repeated raids by the Khmer Rouge, who killed everyone and burned everything to the ground, including livestock – cows, pigs, chickens. All by machetes. My grandparents’ village was another 15 minutes away on motorbike, but a canal separating Cambodia from Vietnam had been dug, creating a buffer zone between villagers and the machete-wielding marauding Khmer Rouge.

However, throughout the summer there had been raids in the middle of the night that Vietnamese soldiers couldn’t stop. The Khmer Rouge hid submerged in large hyacinth flotillas, floating down the Mekong, then randomly came ashore and killed everyone and everything. They had burned the villages to the ground then disappeared back into the Mekong.

Without roads and automobile, waterway was our only escape route, but now that was no longer available. We were ready to abandon our land, with crops not yet harvested, and livestock that no one wanted to buy anymore. We lived in terror, not knowing if our village would be next. The thought of being hacked to death was the most terrifying prospect. This was terrorism at its core.

Luckily that night turned out to be a false alarm. A night fisherman thought he had spotted someone emerging from one of those hyacinth piles. Nevertheless, we eventually had to abandon our land because fighting soon broke out between Vietnam troops and the Khmer Rouge, with bullets and guns.

The 20th Century wasn’t so kind to the people of Cambodia. Unspeakable atrocities visited this beautiful and peaceful kingdom. The history between the Vietnamese and the Khmer people reminisces that of many between the conquering and the vanquished throughout human history. Unfortunately, the Khmer people’s pain and suffering have been manipulated for political gain, whipped into xenophobic rhetoric.

The Vietnamese people, whether native to Cambodia or recently arrived, have become scapegoats, part of the Khmer people’s victimhood narrative. It’s time for the people of Cambodia, especially the post-Khmer Rouge generations, to expect more from their leaders and demand substantive changes to address their daily needs and concerns instead of blaming the Yuon for everything that ails Cambodia.

The Vietnamese in Cambodia today have nothing to do with what happened more than 400 years ago.

Please take the time to rate this post (above) and share it (below). Ratings for top posts are listed on the sidebar. Sharing (on email, Facebook, etc.) helps spread the word about diaCRITICS. And join the conversation and leave a comment! What did you think of Sonny’s personal narrative? How can we rise above the politically charged media and resist the victimhood narrative?