Sonny Le reflects on the cultural practice of eating wildlife, emphasizing the need to implement conservation education to the Vietnamese cultural mindset to prevent endangered species from becoming extinct.

My weeks-old youngest brother’s fever was not responding to conventional medicine. So my mother decided to use what she believed had worked for her four older children. She grounded the tiger tooth in a small stone mortar, added a couple of teaspoons of water, then spoon-fed my brother the milky-white liquid.

He died the next day. In a fit of rage, my father took the tiger tooth and threw it into the river a few meters from our back door.

The tiger tooth was a family heirloom, given to my parents by my relatively rich saw mill-owning maternal grandparents in the Mekong Delta town of Rạch Giá as a wedding present. I wore this very tiger tooth around my neck the first two years of my life. It was believed to not only possess medicinal properties but also the power to ward off ‘evil spirits,’ from which I needed protection as the first-born son.

According to legend, tigers once roamed the forested swamps of the Mekong Delta region, and the tooth came from one of those tigers whose spirits now lorded over the underworld. In reality, that ‘tiger’ tooth could have come from a water buffalo, a wild boar, or even a big dog. No one ever asked why or how those tigers were killed, or if they ever existed.

When we moved to a rural village outside Rạch Giá, we discovered that a few migrating white egrets had built nests in a cluster of melaleuca trees (cây tràm) on our land. Everyday my brother and I couldn’t wait to check the nests. We would snatch the eggs as soon as they were laid. We even managed to shoot down a few birds with a slingshot. After a few years we noticed the egrets no longer came back, but didn’t understand why.

We were poor farmers whose diets consisted mostly of vegetables and fish. We raised chickens and pigs, but they were investments, our savings. The bird eggs and the occasional birds, snakes and turtles, even field rats, were a real treat. When we caught fish, we caught and ate everything, big and small. During the flooding season, the most-prized fish were the baby ones: no bones. The most sought-after baby fish were the snakehead.

To make a meal consisting of baby snakeheads, our family would essentially wipe out four or five broods of future snakeheads, the salmon of the Mekong Delta.

We also ate many things for novelty’s sake, for their rarity. Importantly, we didn’t understand how NOT taking the egrets’ eggs or NOT catching the baby snakeheads would be beneficial to us. We thought if we didn’t, someone else would.

The concept of wildlife protection or nature conservation was not part of the culture. The terms were not even common words.

After nearly 11 years in the U.S., I went back to Vietnam for the first time in 1992 to find my family much better off, no longer subsisting off the land. Not long after my arrival, my father put word out among the vendors at the local wet market that he was looking for exotic fare, e.g. turtles, snakes, birds and prized big fish.

He was quite disappointed when I told him all I wanted was steamed water spinach and cá rô kho tộ (anabas or climbing gourami cooked in a clay pot) for dinner. I wanted to taste the simplest meals that I remembered growing up with. My family didn’t quite understand why a man coming back from a rich country would want to eat nothing but peasant fare.

They eventually gave up trying to understand me when I told to them that comfort foods were not necessarily expensive or exotic.

Wherever I went on that first visit, everybody wanted to feed me the ‘best’ foods, which invariably included wild-caught snakes, turtles, and birds. The notion that wildlife is worth more in the wild than on the plate was not easily understood because many did not see themselves directly, or even indirectly, responsible for the catching or killing of such wildlife. They simply saw themselves as consumers, rationalizing that if they hadn’t purchased snakes, birds or turtles, others would.

I reminisced about our childhood with my brother.  And when I explained to him my theory of why those birds didn’t come back to our melaleuca trees, he had a hard time believing it, but I could sense his feeling of guilt. I felt bad for telling him what we, as kids, may have unwittingly done.

Many of my relatives today, including those of the younger generation, relish the opportunity to lavish themselves with potions, elixirs and wild game that once only the rich could afford. They do have an inkling that the potions and elixirs may not possess anything magical, but believing in them wouldn’t hurt to try them anyway. However, my relatives would not feel nostalgic or be willing to break the law for exotic animals if and when they’re no longer sold in the market. For them, it has everything to do with the novelty, with a break from the everyday’s Vietnamese three-course meal now that they can afford it. No more no less.

It may take time for conservation education to take hold, to become part of the cultural mindset, and even longer for existing laws to be actually enforced without being corrupted. Sadly, time already ran out on Vietnam’s last Javan rhino and elephant, and many other species endemic to Vietnam and neighboring Southeast Asian countries are now on endangered list.

The insatiable appetite of Vietnam’s newly-rich for the exotic has not only put their natural heritage at risk, but also endangered animals a continent away, those in Africa. A shocking 587 South African rhinos, and another 35 in Kenya, have been killed to date in 2013 for their horns; most of which are believed to have been smuggled into Vietnam where a set of horns from a single rhino can fetch up to $1 million. 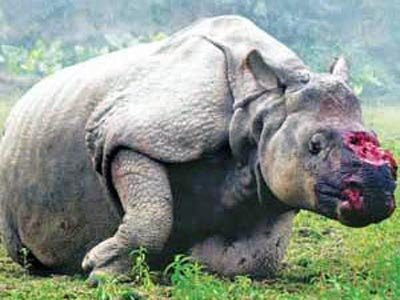 Just imagine: on the average, two rhinos are now killed each day because of a rumor that their horns, which are made of keratin just like your and my finger and toe nails, had cured cancer.

(Special thanks to Chris Galvin Nguyen for going through my writing with a scalpel like a heart surgeon.)

Please take the time to rate this post (above) and share it (below). Ratings for top posts are listed on the sidebar. Sharing (on email, Facebook, etc.) helps spread the word about diaCRITICS. And join the conversation and leave a comment! What do you think of the practice of consuming local wildlife as prestigious dishes? What should be done to restrain a cultural appetite for endangered game?