Alexander Cannon presents an in-depth review of the Houston Grand Opera’s Bound, a new chamber opera that tells the story of Diane Tran, a young Vietnamese American woman who was caught between working two jobs to support for her younger siblings and attending school as a high school student. Through her story, the opera explores multiple themes such as the unevenness of the American Dream, the invisible world of the Vietnamese American, loss and forgetting, injustice and boundedness. 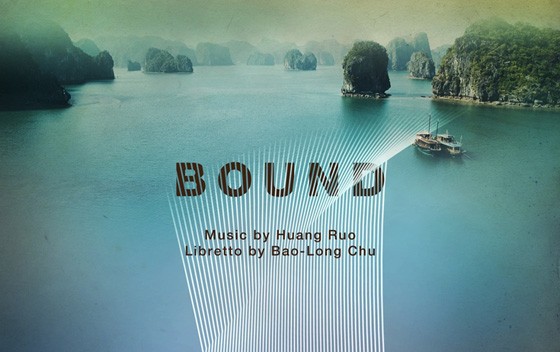 During the week of February 10, the Houston Grand Opera staged four performances of Bound, a new chamber opera on a Vietnamese theme as part of the HGOco East + West series. HGOco has used the series to give voice to the stories of diasporic communities in greater Houston—stories that are silenced, oftentimes, in favor of art-music favorites by Richard Wagner, Giacomo Puccini and other Euro American composers. This work was the seventh in the series that also featured productions involving Japanese, Korean, Cambodian, Iranian, Azerbaijani and Chinese music and imagery.

These works enable collaborations between the Grand Opera, local and non-local artistic talent, and performance spaces in Houston where opera is not heard often. In the case of Bound, Houston-based librettist Bao-Long Chu, fashion designer Chloe Dao, music director Craig Kier, director Christina Keefe, and scenic designer Ryan McGettigan worked with musicians based outside of Texas to craft two free performances in community settings and two ticketed performances at the two-year-old Asia Society Texas Center—a beautiful and serene space in Houston’s Museum District. I attended the ticketed performances on February 15 and 16, where Vietnamese music and diasporic stories resonated with striking—if sometimes stifled—poignancy.

Bound tells the story of Diane Tran, a seventeen-year-old woman from Willis, Texas abandoned by her parents and left to take care of her younger siblings. In 2012, as a result of working two jobs to provide for them, she missed too many days of school. A judge summoned her to face charges of being in contempt of court for which she was found guilty and forced to spend one night in jail. The story made national and international headlines and resulted in an outpouring of support for Diane and the eventual revocation of the charge. Bao-Long Chu crafted the plot as a series of self-reflections on her situation and interactions between Diane and her mother Khanh, her employer, and the judge.

The opera begins with Diane, portrayed by soprano Lei Xu, sitting on the lower bunk of her jail cell and calling out to her mother—“Mẹ ơi! Đêm nay ở đâu?” and then “Oh Mother! Where are you tonight?” Following an introduction to her circumstances and extended questing of her invisible mother, Diane’s employer, Stanley, played by baritone Hector Vásquez, appears on stage pushing a rack of dry cleaning. He implores her to complete her tasks with greater haste; in the process, he informs her that if she cannot open the shop the next morning, she will be fired. When she expresses dismay, noting that she must choose between missing an important exam and losing her job, he quips, “Welcome to your American Dream.”

In the next scene, Khanh, played by mezzo-soprano Nina Yoshida Nelson, appears wearing an áo dài designed by Chloe Dao—the first áo dài designed by the winner of Project Runway Season 2 according to one musician with whom I spoke. Khanh carries a suitcase and sings of forgetting; her voice connects Diane to Vietnam and the ghosts who drove them from the country. She expresses regret for abandoning her parents without a proper burial, noting that the persistent haunting drove her to leave Vietnam and Diane.

Diane then finds herself before the judge, also played by Vásquez. The judge reproaches Diane for her disrespect of him and the law. He argues that those living in the United States must abide by the law; Diane immediately interjects, shouting, “I know where I live! / Do you know how I live?” After ordering her into jail, all return to the jail cell, where the judge, Diane and Khanh sing of being bound: the judge to the law; Khanh to her ancestors and grief; and Diane to responsibility and “what is good and right.” The story ends optimistically, however, suggesting that one can become unbound. The ghosts that haunt are “Just shadows / Waiting for daylight.”

Many audience members came for this story and were moved by it—an administrator for the Asia Society told me that he saw audience members dabbing their eyes during and after the performance. Multiple themes resonate clearly in the libretto, including the unevenness of the American Dream, the invisible world of the Vietnamese American, loss and forgetting, injustice and boundedness. The potential power of the story lies in its connection to the Houston area and the profound injustices met by Vietnamese Americans—and, indeed, many other Americans—on an everyday basis; however, the plot seems undermined by departures from Diane Tran’s story. In an interview with the Houston Chronicle, the librettist admitted that he did not speak with Diane before he wrote the libretto; he imagined Diane’s personal struggles and used her mother as a kind of interlocutor to bring out many of the themes listed above. “In my wondering about Diane and her mother,” he writes in the program, “the libretto wrote itself: the bitterness of leaving home, the wounds of war, and the blood weight of remembering spilled onto the page.” Who is bound to whom in this story? Through Chu’s wondering, is Diane now bound to this story and not the one she lived? A synopsis given before one performance indicates that elements of the imagined story now pepper the recollection of Diane’s lived experience. The libretto and this announcement, for example, suggest that Diane missed ten days of school before being placed into jail; news reports indicate that she missed eighteen days of school. Although a minor point, the discrepancy suggests how new resonances in the telling of the story now disrupt Diane Tran’s voice within it. This concern for voice aside, however, the libretto does examine effectively themes shared within and across diasporic communities in and beyond Houston.

The music composed by Huang Ruo enhances these themes and gives them space and time to reverberate. The music propels the action when needed and enables reflection within and between scenes, giving listeners an opportunity to consider the poignancy of the words just uttered. Ruo writes soaring lyrical melodies expertly delivered by the three singers; these alternate with and, sometimes, accompany rhythmically adventurous material that features complicated patterns played over multiple meters. Even when playing with polyrhythm, Ruo writes texturally rich sonorities, drawing upon an ensemble of flute, clarinet, violin, cello, trombone, upright piano and two Vietnamese instruments—the đàn bầu (monochord) and đàn tranh (sixteen-stringed zither).

The Vietnamese instruments, played adroitly by San Francisco-based Vân-Ánh Vanessa Võ, add strategic depth to the score. At times, the đàn tranh creates background comfort, suggesting, perhaps, a comfort achieved through familial ties. At other times, this resonance is disquieting. During the transition from the first scene in the jail cell to the entrance of Stanley, the members of the ensemble sing and slowly turn rain sticks while Võ plucks the strings of the đàn tranh on the left side of the moveable tuning bridges. 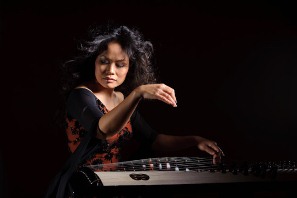 One only uses the left side to ornament pitches played on the right side of the bridges; running one’s finger down the left side produces an out-of-tune and eerie series of pitches that ascend and descend in pitch at random.

At another moment in the work, Võ uses the đàn bầu in a way more typical of Vietnamese traditional music. She looks up from her score and improvises a one-minute passage to enable the transition from Diane’s conversation with Khanh to Diane’s appearance before the judge. Drawing upon her training as a musician of traditional music, Võ reflects on the unique conditions of the present time and space to inspire her playing. This makes stark the distinction between other forms of opera produced by the HGO and this opera; Euro American opera has a long history of using approximated versions of music of the Middle East or Asia to transport audiences to those “exotic” locations. Võ does not use the instrument to help the audience imagine another time and place but to generate a context-specific arch to the next scene. She allows the instrument to sound, resonate and fully dissipate in the theatre; this serves, at least to this listener, to actualize the space of the performance and the emotional impact of the story. In other words, Võ encourages the audience to reflect more fully on the present—Diane’s story being told and the space in which it is told.

After viewing both performances, I remarked to Võ that I heard her playing much more clearly during the final performance. During the former performance, the other musicians frequently muffled her music; during the latter performance, however, her sound blended with the rest of the ensemble. The overlapping rhythms and timbres sounded as part of a more complete whole; I heard the melodic lines started by one instrument, continued by the đàn tranh or đàn bầu and then picked up by another instrument. She laughed when I told her this; right before the final performance, she had decided to turn up the volume on her amplifiers by four notches since she had concerns that the audience could not hear her.

This tactic exemplifies the true goal of the performance of Bound—i.e. the need to raise the volume of the stories told in order to better resonate with surrounding sounds and stories. Working with the diverse and talented artists listed here, the Houston Grand Opera has done so with Bound, and I hope to hear its resonances again.

Alexander M. Cannon is Assistant Professor of Music History and Ethnomusicology in the School of Music at Western Michigan University. His research investigates the changing nature of đờn ca tài tử, a “music for diversion” in contemporary southern Vietnam. He is published in the Journal of Vietnamese Studies and the journal Ethnomusicology; when not writing and teaching, he endeavors to improve his skills on the đàn tranh zither and đàn sến lute.

Please take the time to share this post. Sharing (on email, Facebook, etc.) helps spread the word about diaCRITICS. Join the conversation and leave a comment! Have you seen a performance of Bound? What do you think of this portrayal of Diane Tran’s story?

Butterfly Yellow is a Vietnamese refugee story but also an American one—the way the idea of America is not exactly aligned with the way America actually is.
Read more
Reviews