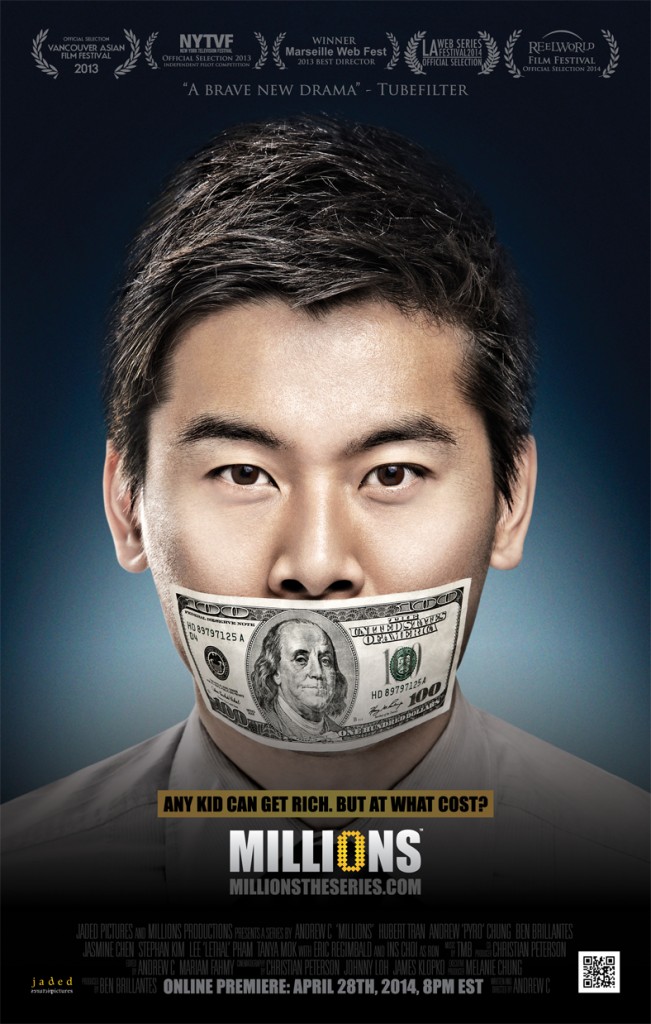 While having a conversation about Heath Ledger, four high school friends make a pact: by the time they turn thirty, they will become millionaires. So starts Andrew C’s new web series Millions. Flash forward eight years and the friends are now grown up, all in different stages of their careers. There’s Brandon (Hubert Tran), a customer service representative for a bank; Deron (Andrew “Pyro” Chung) a marijuana enthusiast and DJ who is fired from a job at his brother’s night club; Mary (Jasmine Chen), a struggling dancer; and Charlie (Stephan Kim), a writer who works as a janitor. There’s also Jay (Ben Brillante), Brandon’s womanizing coworker, his girlfriend Lia (Tanya Mok), and the group’s high achieving friend, Eddie (Lee “Lethal” Pham). Whether struggling with making a living as artists or trying to deal with the monotony and tyranny of the corporate world, clearly, life has not turned out the way it was supposed to be.

Millions ask the question that echoes the plight of many millenials: what happens when you dream big but then life gets in the way? It’s classic existential question, but what sets this web series apart is that director Andrew C. gives viewers something Hollywood productions do not: a pan-Asian cast that resists stereotypes of Asians. Indeed, the characters here are complicated even when they try not to be. Jay, for instance, is at once suave and obnoxious, yet there are moments of vulnerability informed, perhaps, by a history of disappointment:  “I think relationships are stupid,” he says in one scene. “Nothing lasts in this life. We make ourselves think that things will be permanent, but they’re not.”

All of this, of course, does not mean a show that is focused solely on its characters and their internal turmoil. There’s a drug subplot and episode one ends with a car crash—suggesting there’s much more to come from this show made of both new, young talents including Stephan Kim, Ben Brillantes, and Tanya Mok, as well as acting veterans such as Ins Choi.

The show made its debut April 28th and will continue for eight consecutive weeks with episodes available online at: youtube.com/MillionsTheSeries.

Please take the time to share this post. Sharing (on email, Facebook, etc.) helps spread the word about diaCRITICS. Join the conversation and leave a comment! If you have seen this web series, do you agree with the author’s review? What do you like or do not like about this series?