“Radicals on the Road” In the Vietnam War Era

Karin Aguilar-San Juan reviews Judy Tzu-Chun Wu’s newest book, which explores the often untold story of women and people of color who organized groups to advocate against the U.S. war in Viet Nam. 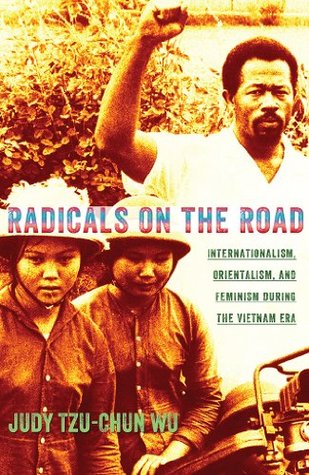 More than two hundred U.S. citizens traveled to “red Asia” during the Cold War, and their face-to-face encounters with the people they met while abroad had a tangible impact on the U.S. anti-war movement of the 1960s and 70s. Professor Judy Tzu-Chun Wu centers the contributions of women and people of color in this important historical study. Wu uses the concept of “radical orientalism” to describe the attitude that people of color, including Asian Americans, developed toward their counterparts in Asia. Radical orientalism flips the script of West-more-civilized-than-East and turns the “East” into a positive symbol of the struggles against colonialism, militarism, materialism, and racism.

The first example is Robert Span Browne, a black economist and diplomat from Chicago who worked for the U.S. government in Cambodia and South Viet Nam from 1955 to 1961. While in Cambodia, Browne met Huoi, a woman of Chinese and Vietnamese ancestry. They had four children while living in Southeast Asia. As part of the U.S. country teams first in Phnom Penh and then in Saigon, Browne observed a conflict in priorities between local economic development and U.S. “security” interests. In 1961, Browne resigned from his post, perhaps because he could “see the beginnings of a U.S. quagmire in Southeast Asia” (p. 60). After relocating with his wife and young children in New Jersey, Browne reconnected with the black community and became an influential resource and symbol of Afro-Asian unity within the U.S. anti-war movement. Wu remarks on the ways that Browne’s interracial family became an important piece of the argument against the War: their kinship ties offered evidence that the “enemy” camp was, in fact, populated by human beings.

Browne became a close friend and collaborator of Nguyen Xuan Bao, the Buddhist monk who came to the United States in 1961, later known as Thich Nhat Hanh. The monk reached out to Browne because of his outspoken criticism of the U.S. presence in Southeast Asia. In 1966, Browne together with the Fellowship of Reconciliation, a white pacifist organization, arranged for Thich Nhat Hanh to meet with Martin Luther King, Jr. The book includes a fascinating photo of the three men together (p. 90). In 1967, King nominated Thich Nhat Hanh for the Nobel Peace Prize, calling him “an apostle of peace and non-violence” (p. 90). Thich Nhat Hanh has since become “the Vietnamese version of Gandhi” (p. 89).

The second example is a group of eleven U.S. travelers led by Eldridge Cleaver, a leader of the Black Panther Party who at the time was living in exile in Cuba. Calling themselves the “U.S. People’s Anti-Imperialist Delegation,” this group’s revolutionary politics and multiracial/gender composition distinguished them from other travelers to Asia at that time. Instead of seeing themselves as pacifists trying to end the War, Cleaver and his companions were “Third World internationalists” who took their cues from the 1955 Bandung conference where representatives of the non-aligned nations banded together. Although they were all U.S. citizens, these revolutionary travelers wanted to assert their common bond with the most downtrodden poor, brown- and black-skinned people of the world. 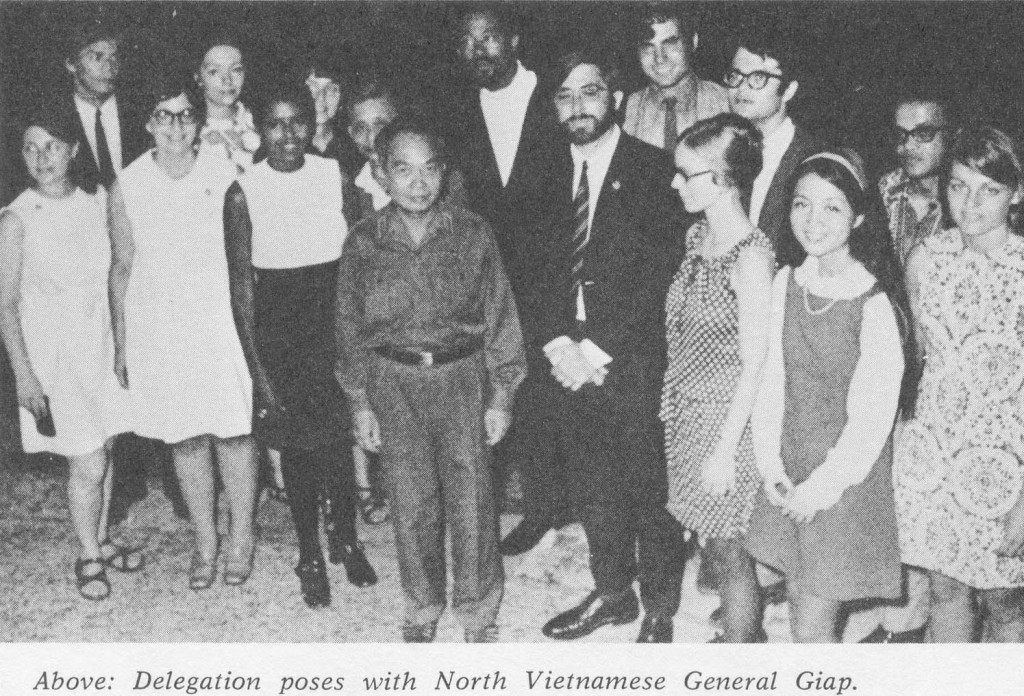 Two members of Cleaver’s delegation were Asian Americans: Alex Hing and Pat Sumi. Wu emphasizes that for both of them, their attachments to Asia were cultivated and reinforced not through their Chinese or Japanese ethnic communities or family ties, but through their political affinities with the Black Panthers. During the 1970s, the Panthers idolized Asian revolutionaries, and the faces of Kim Il Sung, Ho Chi Minh, and Mao were featured in their publications along with Che Guevarra and Patrice Lumumba. Alex Hing was a member of the Red Guard in San Francisco’s Chinatown. As he put it: “[W]e want the Vietnamese to win against U.S. imperialism” (p. 109). By writing about their experiences in the Asian American activist newspaper Gidra, for example, Hing and Sumi helped to create a feeling of revolutionary affinity with Asia.

Wu offers a detailed analysis of the complex and dramatic two-and-a-half month journey to North Korea, China, and Viet Nam. But the gist of the trip is summed up well in a photograph from Eldridge Cleaver’s archive: Cleaver, fist raised high, towers over three petite Vietnamese women wearing combat helmets, arms at their sides (p. 165). One of the women is crouching next to an old and simple military weapon, maybe a single-load carbine from the war against the French. While Cleaver gazes sternly into the camera, perhaps hoping to be captured for posterity, the women are all looking elsewhere, as if they are not interested in having their images captured at all. The photograph supports the idea that the U.S. travelers wanted to deliver a specific political message to the world, while the people they met in war-time Asia were preoccupied with fighting, trying to survive, and making plans for their future.

In the third example, more than one thousand North American women met with women from Laos and Viet Nam at the 1971 Indochinese Women’s Conferences (IWC) held in Toronto and Vancouver, Canada. These encounters enabled U.S. and Canadian women to witness personal war testimonies from Asian women without traveling to all the way Asia; in those times, the trip from New York to Hanoi, for instance, could take up to two weeks and entailed a dangerous path through militarized air space. Also, the U.S. State Department had banned travel to socialist countries, so U.S. travelers also risked charges of treason, had their passports revoked for a short period, or came under the scrutiny of the FBI.

Prior to the IWCs and going back as far as 1965, conversations and engagements between women in Europe, Africa, Australia, Cuba, and Asia created a base of “old friends” that the Vietnamese in particular turned to for help. By 1971, “new friends” were added to the mix, so that the IWCs brought together women who embodied many strains of feminism: maternal, equal rights, socialist, radical lesbian, third world, and women of color. The IWCs allowed the formation and expansion of more globally oriented, anti-war, or anti-imperialist perspectives among feminists in the United States and Canada.

A key figure at this time was Nguyen Thi Binh, a South Vietnamese woman from an elite, educated background who helped establish the National Liberation Forces (or “Viet Cong”) and who, as the foreign minister of the Provisional Revolutionary Government of South Viet Nam, served as the only woman at the Paris Peace Talks of 1968-1973. The gentle and yet determined visage of “Madame Binh,” together with the unnamed figure of the peasant woman warrior in the Vietnamese countryside, inspired North American women to re-examine their roles as subordinates to mostly white men in the anti-war movement. For example, Cora Weiss and Charlotte Bunch-Weeks, both leaders in the U.S. organization called New Mobilization to End the War in Vietnam, worked with others to form a women’s caucus in order to develop a “feminist analysis of war and imperialism” (p. 210). In this way, Vietnamese women enabled “second wave” feminists to challenge heteropatriarchy and to find new roles and identities for themselves (p. 204)

Throughout the book, Wu points out that the U.S. anti-war movement developed in part through the efforts of Asian groups and committees that sought international support and thus purposefully cultivated friendly ties with ordinary citizens who were critical of U.S. foreign policy and military intervention. Instead of sheer instrumentalism, which would have entailed treating individuals as mere pawns, the acts of reaching out were received as touching and real gestures of solidarity. Eldridge Cleaver describes his exchange with Premier Pham Van Dong in Hanoi as an unforgettable personal tribute. Cleaver’s famous memoir, Soul on Ice, was published in France under the title Un Noir a l’ombre (A Black in the Shadows). Pham Van Dong told him: “In the West, you are black in the shadows, but here you are black in the sun” (p. 147).

The upbeat attitude of radical orientalism gave way to a more sober and even cynical view as North Korea, the People’s Republic of China, and the Democratic Republic of Viet Nam moved ahead in history to tackle new challenges and problems. By the late 1970s, as Wu puts it, “there were no clear-cut revolutionary champions and capitalist villains” (p. 271). Nevertheless, the impact of face-to-face encounters with living and breathing revolutionaries in Asia left its mark on many of the travelers, including Alex Hing and Charlotte Bunch. The naive romanticism of the Vietnam anti-war movement has no doubt faded, but hopefully there is reason to believe that in the conflict-ridden twenty-first century, “genuine dialogue and collective identification among people across various borders” is still possible (p. 11).

The images used on this article are derived from Judy Tzu-Chun Wu’s, Journeys Towards Peace, a site based on Radicals on the Road.

Karin Aguilar-San Juan is an associate professor of American Studies at Macalester College. In January 2013, she helped to organize a trip to Ha Noi with a group of U.S. anti-war activists from the 1970s including Alex Hing, Judy Gumbo Albert, and Rennie Davis.

Please take the time to share this post. Sharing (on email, Facebook, etc.) helps spread the word about diaCRITICS. Join the conversation and leave a comment! How do we promote solidarity among people of different backgrounds and effectively address the challenges we face in our community today?

"Savage Pageant" is a companion for our concurrent entrapment and escape. We can accompany the tapir into extinction, crushed and crushing both by and within the play, the pageant, the show.
Read more
Reviews

The book showcases the joy of parents and children creating together, which is a positive opportunity to take advantage of during our pandemic confinement.
Read more