Review of “The Gift of Freedom: War, Debt, and Other Refugee Passages” 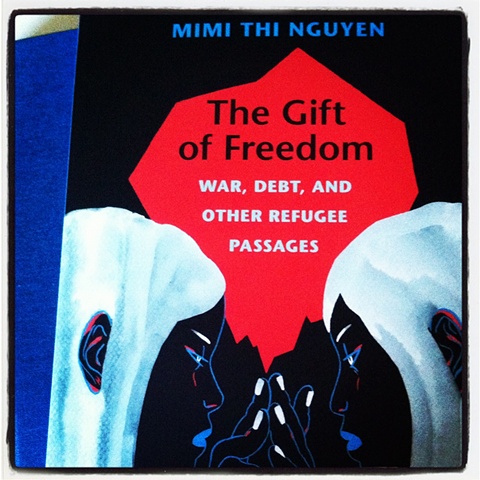 In 1993, Madelenna Lai created a “fishing boat in the form of a golden bird made of a hundred thousand flowers” for the New Year’s Rose Parade in Pasadena (2).  “Thank you America and the World,” the bedazzling float representing the Vietnamese boat refugee experience proclaimed. Three years later in Washington D.C., Phan Thi Kim Phúc, the iconic ‘girl in the photograph’ burned by U.S.-dropped napalm, publicly forgave the American pilot thought responsible for her scars.  Although some believe the actual pilot might have been South Vietnamese, this ceremonial forgiveness of an American pilot eased the lingering guilt of the American public haunted by images of violence in Vietnam. In 2001, in light of a new American war in the Middle East, Assistant Attorney General Viet D. Dinh was hailed as the chief architect of the USA Patriot Act. Having personally experienced the benefits of American freedom, he worked to ensure its protection at home and continued expansion abroad.

How do we make sense of these Vietnamese refugee acts—these messy affects of gratitude, forgiveness, and protectionism?  Many scholars critical of U.S. empire have elided these politically unruly subjects, highlighting instead examples of resistance and opposition. Mimi Nguyen is different. In her brilliant book The Gift of Freedom: War, Debt, and Other Refugee Passages, Nguyen cautions against such “metaphysical fantasies of otherness as authentic resistance” and the “overdetermination of our political hopes,” instead taking seriously these subjects and sentiments that structure the Vietnamese America refugee community (28).  She proposes the concept of the ‘gift of freedom’ for analyzing justifications for and responses to American liberal war abroad.  Although the bulk of her analysis surrounds the Vietnam War and its aftereffects, in the last chapters she makes connections with contemporary wars in Afghanistan and Iraq.

The ‘gift of freedom’ is seductive because it is beautiful: it promises love, hope, life, and happiness (5).  It “haunts empire, not just with mournful ghosts but also with beautiful visions” (21).  Nguyen does not deny that for many Vietnamese refugees, the ‘gift of freedom’ grants a more fruitful and fulfilling life in the United States than in the Socialist Republic of Vietnam.  Rather than conceptualizing the ‘gift of freedom’ as merely a lie or a ploy—and Vietnamese refugees as victims of ‘false consciousness’—Nguyen acknowledges the very real benefits of the ‘gift of freedom,’ as well as its attendant feelings of gratitude and patriotism.  However, drawing from Jacques Derrida and Michel Foucault, she also highlights the paradoxes inherent in this gift.  According to Derrida, there can be no true gift without debt.  As a result, Vietnamese refugees can never be equal to other Americans; they are perpetually stuck in an inferior position of ‘owing’ the United States for their rescue.  To be forever in debt is to never be truly free. Furthermore, Foucault conceptualizes the ‘gift of freedom’ as an invitation to governmentality and control.  When Vietnamese refugees become subjects of liberal government, they are subject to its rules and regulations.  In the case of the Patriot Act, such laws ‘protecting freedom’ may inhibit other forms of freedom.

According to Nguyen, the “gift of freedom” is also “a gift of time” (17).  In Provincializing Europe, Dipesh Chakrabarty argued that the world is divided up between European ‘modern countries’ and those thought to be anachronistically ‘stuck in the past.’  The ‘gift of freedom’ is thus also an invitation to ‘catch up to’ modernity, which is in turn equated with “technological progress, productive capacity, or rational government” (17).  However, not only does this biased linear conception of temporality conceive of non-white countries as ‘backwards;’ it also claims that there is only one ‘correct’ way to advance to modernity, thus denying political alternatives.

Furthermore, the ‘gift of freedom’ is dependent upon “liberal war” and the extension of American empire abroad (xii).  The U.S. must invade a country before it can free its people and pull them into modernity.  Thus the price of this ‘gift of freedom’ is war, violence, and destruction.  According to Nguyen, we cannot dismiss American desires to bring ‘oppressed peoples’ around the world self-government, citizenship, and civil rights as “disingenuous” or merely “disguising more ignobly mundane, material ambitions;” however, we cannot deny that in today’s world, America has a monopoly on definitions of “human peace and freedom,” such that other forms of politics and other ways of living become invalidated (49).  In other words, when the American way of life becomes equated with global “peace and freedom,” America has effectively justified its perpetual expansion abroad in defense of ‘humanity.’  Throughout her book Nguyen highlights the paradox of justifying today’s “occupations and dislocations of racial, colonial others” in the name of “the human, through invocations of peace, protection, rights, democracy, freedom, and security” (xi-xii).

In the vein of transnational feminist studies and postcolonial cultural studies, The Gift of Freedom presents three main in-depth readings of Vietnamese refugee attachments to the ‘gift of freedom’ and their attendant structures of debt. Nguyen’s analysis of the subjects that opened this piece is careful and nuanced: “We need not deny the violence and destruction that undergirds the gift of freedom to also take seriously its promise to reverence beauty, or respect aliveness, because these are part of its power” (32).  Although Nguyen emphasizes the lingering debt that weighs upon the Vietnamese refugee, at the end she suggests an alternative reading of this debt as something that “demands of us that we remember,” “keeping us in contact with alternative collectivities of others who bear the trace of human freedom that falls apart, or seizes hold, in its giving” (188-189). Debt pulls Vietnamese refugees into the past, barring them from true “equality” or “modernity”—however, such hauntings can also open up new combinations and conceptions of the past, leading us towards “other passages to an unknowable future” (189).  Therein lies the hope of dismantling the paradoxes of the ‘gift of freedom.’

Evyn Lê Espiritu is a UC Berkeley Rhetoric PhD student and filmmaker interested in the politics of memory, the aesthetics of diaspora, and the spatialization of historical production. She currently studies the South Vietnamese refugee population in Israel as a means to problematize diaspora, citizenship, and sovereignty.

Please take the time to share this post. Sharing (on email, Facebook, etc.) helps spread the word about diaCRITICS. Join the conversation and leave a comment! Have you read Mimi Thi Nguyen’s The Gift of Freedom? If so, let us know what you think!

Landscape Memory, a three-channel video installation by artist and organizer Boone Nguyen, explores the complexities of diasporic remembering as Nguyen returns to the rural village where his extended family lives in Vietnam. The video documents and juxtaposes varying ways of remembering and honoring the dead, such as cleaning burial sites and burning incense, with bomb crater-turned-lakes, reclaimed over time by nature, in addition to the act of the journey itself.
Read more
Reviews

The book showcases the joy of parents and children creating together, which is a positive opportunity to take advantage of during our pandemic confinement.
Read more