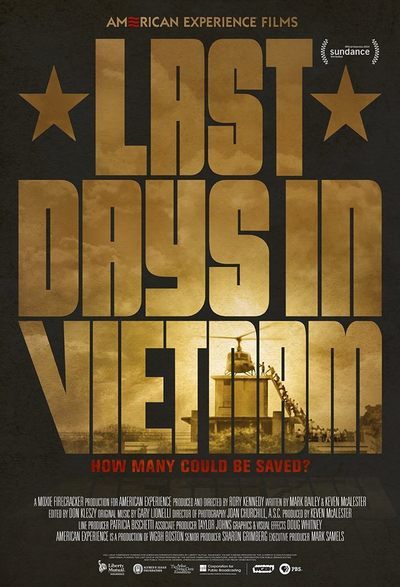 Dao X. Tran reviews the historical documentary, The Last Days In Vietnam, which premiered on September 5, 2014. The original post was first published in Hyphen and can be read here.

Last Days in Vietnam. The film’s title and that it was made as part of PBS’s American Experience series should have tipped me off that it would be no different than most U.S. films about the war in Vietnam — that is, fully focused on the experiences and perspectives of Americans there and only able to pay cursory attention to the Vietnamese who were supporters of or employed by the U.S. intervention forces. The Vietnamese people in this film aren’t merely props, but only barely.

Yes, there is powerful archival footage never seen in a film before. Yes, there are moving interviews with U.S. vets and South Vietnamese vets and citizens connected to the U.S. war effort looking back on what they did and didn’t do and the consequences. But in the end, this documentary embraces a singular U.S. perspective, fully informed by regret and guilt, bent on rehabilitating the U.S. war project in Vietnam. That some U..S military and government officials and personnel acted in honorable ways toward their South Vietnamese counterparts is undeniable. But focusing the narrative on these “last days” and highlighting the role of “humanitarian” efforts to evacuate Vietnamese allies inevitably distorts the historical record.

About ten minutes in, the key American characters have been established. They include a strangely optimistic and intransigent U.S. ambassador, who refuses to consider the possibility that U.S. forces are on the brink of retreat, several lower-level officers, embassy workers, and enlisted U.S. soldiers who do the best they can in difficult circumstances. The regret about leaving behind Vietnamese who were “loyal” that informs the various U.S. servicemen’s recollections is genuine, but one wonders why there was hand-wringing over the thousands they wanted to help and so little sympathy to spare for the nation and millions already devastated.

We are plunged into the chaos (which no doubt existed) of the reunification, or fall — depending on your political lens — of Saigon with them. Surely, one of the strongest potentials of documentary film is its ability to provide the context needed for historical understanding. Why was the United States in Vietnam? Why was the country divided into North and South? What happened between the time the U.S. sent in “advisors” in 1961 and April 1975? But Last Days instead relies on tired, old (and un-nuanced) explanations: the United States was in Vietnam to aid a “democratic” government push back against aggressive Communists “invading” from the North.

This comes complete with a disturbingly unself-conscious graphic map of Vietnam depicting the encroaching Communist forces as a slow, steady blood-red stain. If I didn’t know better, I would have thought I was watching something from the Cold War era. An ominous soundtrack accompanies audio commentary in this passage highlighting how fearful the South Vietnamese (allied with or working for the U.S. forces, I must reiterate) and their families were at the thought of what the People’s Army of Vietnam would do to them and their families. My own family was implicated with first the French colonial regime and some didn’t survive the ascension of the Viet Minh to power in the North in the 1950s. Later, in the South, my dad was a low-ranking officer in the ARVN, and my family also fled in the early months of 1975. So I know the fear was real. It’s just that if you were, say, a Martian, with no knowledge of the actual history of U.S. intervention in Vietnam (and the French before it) and the devastation it wreaked on both the land and its people, watching this documentary you’d think that the only forces engaged in killing were those of the North Vietnamese. Forget about carpet-bombing, Agent Orange, the Strategic Hamlet program, and more than three million Southeast Asian dead. Sadly, many in the Manhattan audience I saw it with were either genuinely unaware of the lack of critical analysis or just relieved to see Viets on screen as real people and not stock caricatures. (For an exceptional U.S.-made documentary about the war in Vietnam, check out Emile de Antonio’s 1968 In the Year of the Pig, which is chock-full of historical footage.)

The tense moments of impending U.S. evacuation Last Days focuses on of course do provide a gripping narrative and it’s novel to see any attention paid to the collective Vietnamese experience in a U.S.-made documentary. Perhaps what I find most galling then is this precise focus on the few “noble” acts that some U.S. servicemen undertook to help their friends and families. The lionization of U.S. officials and marines can in no way define the U.S. intervention in Vietnam. The film cheers the “black ops” these men undertook to help the Vietnamese they worked with, who depended on or supported them — while conveniently obscuring the much bigger black ops that took place as part of the U.S. war effort to “kill anything that moves.”

I have already heard the defense: This film and its filmmaker were just trying to be neutral and present archival footage and commentary from some participants so that audiences can make up their own minds. But as we know, what you choose to include and highlight matters as much as what you exclude or push into the background.

Appearing on The Daily Show, Rory Kennedy offered this for a short summary of the political context: “The country falls within four months because the U.S. isn’t there…. They [the North Vietnamese] broke the peace accord…. There was no support by the U.S. and…it fell like a house of cards.” I happen to agree with the “falling like a house of cards” analogy, but from a vastly different perspective. Corrupt regimes like the one that existed in South Vietnam in 1975 — that didn’t even pretend to embody yearnings for national independence and liberation — do not tend to have much popular support.

No doubt the coming fortieth anniversary of this war also has much to do with Last Days’ particular rewriting of the history. At a time when “the United States is ‘abandoning’ Iraq and Afghanistan” is the dominant lens through which the latest military adventures of our state is seen, the argument (for those in power) that is of paramount importance is that the United States was right to be there, was right to intervene, and should not have left. They could not be more wrong.

My six-year-old, curious about a postcard I picked up at the screening about a connected project to preserve the stories of those who lived through those “last days” and came to live in the United States, asked me why the documentary asserted that it was the last days when the country obviously still exists. Sadly, the film never even imagines this question.

Dao X. Tran– Born in Vietnam, Dao is the last of eight children in a family of refugees who came to the United States in 1975. She coedited <<101 Changemakers: Rebels and Radicals Who Changed US History>>, works on oral history projects, and is based in New York City.

Please take the time to share this post. Sharing (on email, Facebook, etc.) helps spread the word about diaCRITICS. Join the conversation and leave a comment! Have you seen The Last Days In Vietnam yet? If so, tell us what you think! We want to know!

I think Hollywood has and still most of the time employs their friends from “the old boys’ club,” people who look alike and think alike and have similar views about women. This will only change when Hollywood actually values true inclusion, especially when so many studies and articles show doing right by marginalized groups equals a ton more loot at the box office.
Read more
Essays

I used to dream of a simpler time, a Vietnam of thatch roof huts and banana leaves and lotus flowers. But this Vietnam only exists in my imagination. We must not romanticise a past that never was, or choose only to remember the innocence of our history. Spoiler alert: Nobody’s history is innocent. We must be brave enough to claim it all. People like me, who by today’s standards are referred to as 'people of colour' or 'minority groups', belong to histories which are not only as tremendous, as grand, and as civilised as the Europeans, but as brutal.
Read more