Hit movie “How To Fight in Six Inch Heels” arrives in the US! Jade Hidle tells us about it. Go see this movie!

If you are, like me, tired of the slew of post-Oscar season box office duds, don’t worry. You now have a reason to return to the theater. Ham Tran, director of the acclaimed 2007 film Journey from the Fall and editor of Để Mai Tính, which diacritics reviewed in 2010, has released a new feature-length film, How to Fight in Six Inch Heels. 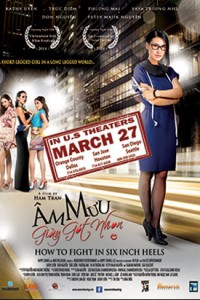 The film traces the movement familiar to many diasporic Vietnamese today—the journey of returning to Viet Nam for work, for rediscovery, and, in this case, for love. In the film, Anne, played by superstar Kathy Uyen, comically struggles to maintain a long-distance relationship with her fiancé, Kiet, who is working in the Saigon fashion industry. Anne is propelled back to Viet Nam out of the jealous suspicion that Kiet is cheating on her with a supermodel. Anne, a fashion designer herself, plots to infiltrate Saigon’s high-fashion spheres, only to find herself befriending supermodels and learning more than just the infidelity she expected to find.

As the trailer reveals, How to Fight in Six Inch Heels shows a side of contemporary Viet Nam that typically does not get represented in the media.

When it was released in Viet Nam in 2013, How to Fight in Six Inch Heels held the number one spot in the box office for three weeks straight. Not only was the film popular among Vietnamese audiences, it garnered critical acclaim. At the Golden Kite Awards, Vietnam’s equivalent of The Oscars, lead actress Kathy Uyen won Best Actress and the film was awarded the Silver Kite prize for best feature film of 2014. 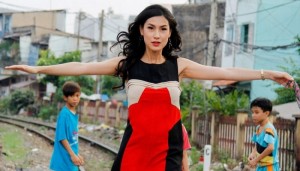 When the film crossed the Pacific, it was an official selection in numerous prestigious film festivals along the west coast—including San Francisco’s CAAMFEST, the Los Angeles Asian American Film Festival, and the Vietnamese International Film Festival. 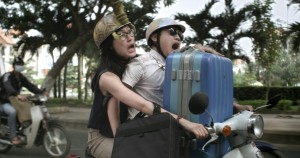 How to Fight in Six Inch Heels is one of the few Vietnamese films to get distribution in the U.S., and is currently showing in select theaters, including Garden Grove’s Regal 16 and AMC Block 30 in Orange. The movie will also be in several cities with Vietnamese American communities, including San Jose, San Diego, Seattle, Dallas, Houston, and Atlanta. 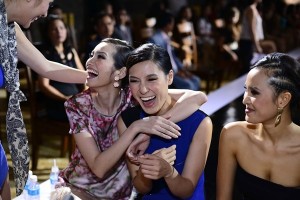 Many diacritics readers share the frustration with the lack of media representation of Asian Americans, and Vietnamese in particular. That is oftentimes the result of the difficulties in getting funding and distribution. The fact that How to Fight in Six Inch Heels has achieved this speaks to its transnational entertainment value and translatability across Vietnamese communities in Viet Nam and abroad. In light of this, going to see Tran’s new film is an opportunity to support Vietnamese American art and strengthen the connection between Vietnamese worldwide.

As I am a fan of Ham Tran’s previous work, I am looking forward to enjoying How to Fight in Six Inch Heels. Check your local theaters for screening times, and stay tuned for an upcoming review of the film and interview with cast and crew.

Jade Hidle is a Vietnamese-Irish-Norwegian writer and educator. She holds an MFA in creative writing from CSU Long Beach and is working on a PhD in literature at UC San Diego. Her work has appeared in Spot Lit, Word River, and Beside the City of Angels.