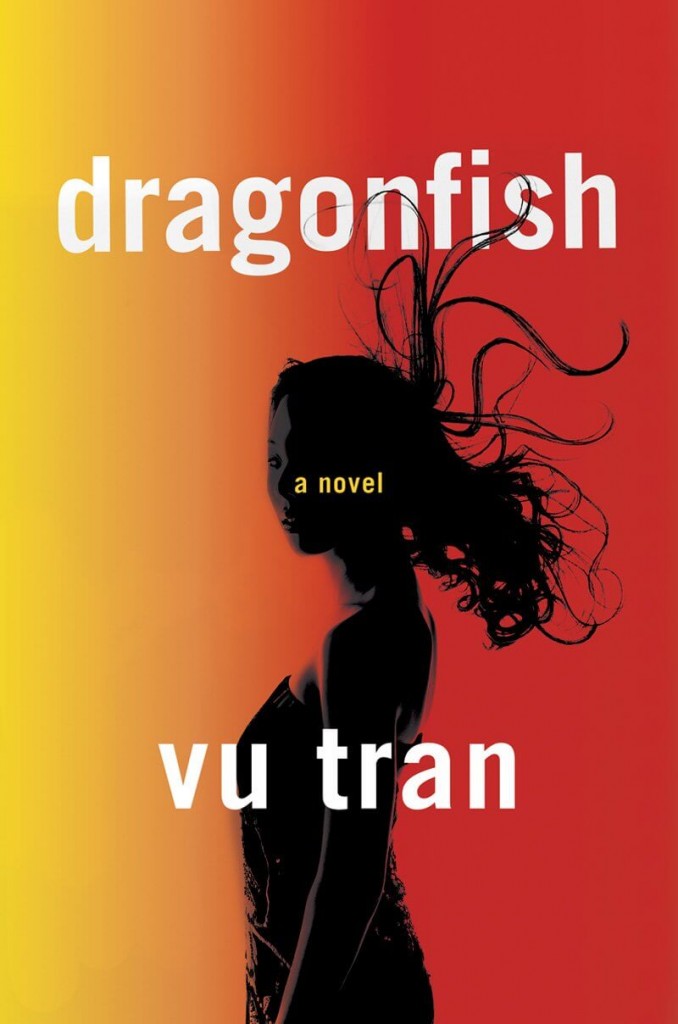 Vietnamese American writers are not known for genre fiction. There only a few publishing science fiction, including Nghi Vo and Z.M. Quỳnh (and we can add Aliette de Bodard if we move beyond the United States and into the diaspora in general). Likewise, Vietnamese American writers working with the crime novel form are rare. Because of this, reading Vu Tran’s debut novel Dragonfish, billed as a noir thriller, is refreshing.

Dragonfish has all the markings of a good detective story. An Oakland cop, Robert, narrates the novel while Sonny, a Vegas gambler and smuggler with a violent history, serves as its villain. And, of course, there’s the mystery in the disappearance of Suzy—Robert’s ex-wife and Sonny’s current wife—and it is this disappearance that prompts Sonny to kidnap Robert bring him to Las Vegas.

One of the strongest attributes of Tran’s writing is its ability to evoke a place like Las Vegas. It is a city “too alive, too troubled with hope, ever to sleep,” and a desert with a monsoon season. It is also a place emblematic of today’s multiracial America as is most evident in city’s Chinatown, “a theme park like the rest of the city” of pagodified buildings, where Vietnamese sell Japanese food and Mexicans speak Vietnamese. In short, Tran’s Las Vegas is strange—“a mirage within mirage.”

It is in one of these odd places, a quiet suburban park of palm trees and man-made ponds and islands, that Robert learns why he’s there: Sonny and his son, Junior, have pinpointed where Suzy is staying and Robert is there to bait Suzy out of hiding. “[S]he will not run away from you,” says Junior after threatening to blackmail Robert with incriminating photos and videos.

Reluctantly, Robert agrees, while secretly hoping to save his ex-wife from Sonny. Soon, however, Suzy’s hidden life is brought out into the open, including the daughter she abandoned, Mai, and the letters she left behind trying to explain herself.

Dragonfish is a page-turner of the first degree as Tran expertly unravels Suzy’s past to us, both through excerpts of letters to her daughter and through on-point pacing and tight control of the narrative. That Suzy has a daughter who is still alive is a surprise for Robert (readers, on the other hand, are given hints to this at the very beginning). But what Suzy leaves behind in her disappearance—her legacy, an apology, and a tainted gift—as well as what Tran’s characters do is equally surprising to both readers and Robert to the very end.

Writing genre fiction, though—specifically, writing satisfying genre fiction—is always risky and one might be tempted to criticize the crime novel conventions the author chooses to use—or, as is sometimes the case, not use. For instance, despite having a back-story that includes a rough and overbearing father, readers never get beneath the surface of Robert’s character, his desires, and his stake in the plot to find Suzy. At times, he also becomes merely an observer. In a scene where Mai and one of Sonny’s henchmen talk, Robert realizes, “I’d become a stranger at the table.” Despite being the narrator, this story is never truly about Robert and his development as he stands in for the investigator character every mystery story needs. On the other hand, Tran plays with other conventions—like a relatively untidy ending—that might not suit hardcore readers of the genre who expect the mystery to be solved and some semblance of peace and order.

Such narrative playfulness, however, speak very much to the book’s themes representation. By having the story not be about Robert, the novel deflects a white gaze: this not a story about a white man, but about a Vietnamese American woman. Meanwhile, Tran’s refusal of a tidy ending suggests the impossibility of truly knowing the refugee’s—or more generally, the Other’s—story. Early in the novel, while lamenting the hardships of his and Suzy’s relationship, Robert says, “The least she could do was share her stories, like how happy her childhood had been and how the Communists were, or how her uncle or father or neighbor had died in battle or survived reeducation camp, or something.” Here Robert is angry because Suzy never gives him a recognizable story: that of a refugee surviving a third world country and assimilating successfully into their new home country.

Indeed, despite all she reveals in her letters, Suzy is as mysterious at the end of the novel as she is at its beginning. Rather than giving a stereotypical story of immigrant assimilation, Tran ultimately denies readers the privilege of seeing themselves. The novel seems to argue that finding universality in the refugee’s story might not be possible because trauma is not universal. The best we can do, then, is listen (or read).

In this way, Dragonfish is a powerful piece of literature. Writing a thriller—a genre that traditionally lacks straight realism—Tran further separates the reader from the story being told. It asks readers to look beyond their comfortable existence and step into that, however briefly, of another. It is literature at its best, whatever the genre.

“Collingwood”~ a poem by Nam Le