Linh Dinh writes on culture and politics in the new Vietnam. 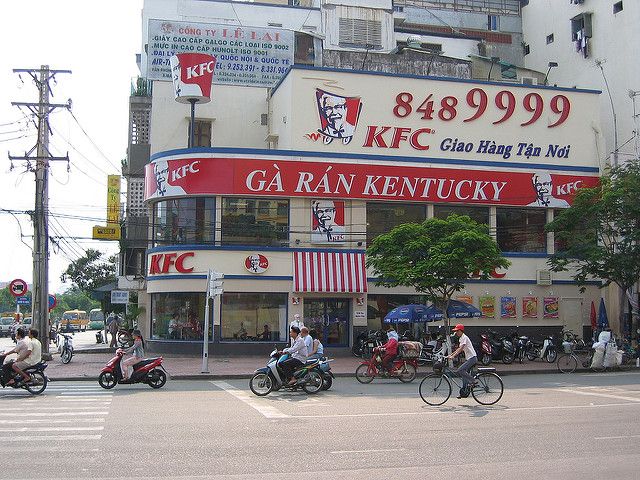 I last saw Vietnam in 2001. Back then, Saigon had no American fast food joints save a Kentucky Fried Chicken. Long-term foreign residents were few, and mostly confined to the Phạm Ngũ Lão area. There were no foreign stars in the just-established professional soccer league.

Now in Saigon, there are 20 KFCs, eight Burger Kings and six McDonald’s, with one across the street from where I used to lived, five miles from downtown.

In December of 2007, an Afro-Brazilian soccer player, Fábio dos Santos, changed his name to Phan Văn Santos and became Vietnamese. This, in a country where millions had risked death or imprisonment trying to get out not too long before. In 2008, Santos was on Vietnam’s national team in a friendly match against, um, Brazil! Santos on his new status:

I am very happy to become Vietnamese. The new citizenship will help me greatly in my career and maybe help the national team as well. I have been living and working in Vietnam for six years. I think my decision was the right one, even though it was very difficult. To my surprise, my parents support my decision. When I return to Brazil in the future, I will be a guest, not a citizen… Sometimes I felt sad because I had to give up my Brazilian citizenship. But my becoming Vietnamese is God’s idea.

Since 2003, the leading scorer in the V.League each year has been foreign, with Nigeria, Argentina, Brazil and the Republic of Congo all represented. Nigeria-born Hoàng Vũ Samson became a naturalized Vietnamese in 2013, the year he won his first scoring title. Samson still has very intimate ties to his homeland, however. In a 2016 article, Thanh Niên [Youth] relates:

A surprising thing about Hoàng Vũ Samson is that he has two wives, one Nigerian and one Vietnamese (living in Ho Chi Minh City). Fortunately, both of his wives get along. Many times, his Nigerian wife has come for a visit, and Samson takes both of his wives, plus his many children, out. They all eat and drink happily to together.

Netherlands-born Danny van Bakel is now Nguyễn Van Bakel. Serendipitously, “Van” is a common middle name in both Vietnam and Holland. The star defender for Thanh Hoá has just one wife, a Vietnamese.

Vietnamese-language proficiency is clearly not required for citizenship, for neither Hoàng Vũ Samson nor Đinh Hoàng Max can speak Vietnamese. Palestinian Saleem Hammad, however, can handle the language almost like a native, with a solid Hanoi accent. Arriving in 2011 on a university scholarship, Hammad has become a familiar face on television, having co-hosted several episodes of S Việt Nam, a popular domestic travel show. Viet Nam News quotes Hammad:

Việt Nam was a strange country for me at that time. After my family knew that I would have an opportunity to study here, everybody encouraged me. They told me that it was a country where its inhabitants worked very hard and they were very courageous. They had won against invaders to bring independence to their country. It is also the dream of the people of Palestine.

Handsome and tall, Hammad has also found regular work as a model. Foreign models are huge there. Though white skin and blonde hair are especially in demand, Yeannie Maya Aitkins of Sierra Leone has also landed a few gigs.

On TV and in advertising, then, the foreign has become a regular feature. In 2014, an overweight and listless Kelly Clarkson waddled through “A Moment Like This” to an indifferent audience at the Miss Vietnam pageant. Many Vietnam Idol contestants sing in English. South Korean soap operas and K-Pop have been popular since 2000.

Saigon now has a budding black neighborhood. On December 31st, 2015, Vietnam Express reported that in Gò Vấp, there’s an apartment complex with many Africans, up to ten in a room. A handful of restaurants were frequented by Africans, and there’s a nightclub that had become notorious for loud music late into the night, with fights erupting sporadically. Natives of Ghana, Algeria, Nigeria and Cameroon, etc., many Africans in Saigon were illegals. Most were poor. Vietnam Express quoted a Vietnamese waiter:

I’ve worked here for three months already. They spend very modestly. I’ve never been tipped anything by these foreigners. Even with change of 1,000-2,000 dong [4-8 U.S. cents], they won’t leave it.

Mostly poor, ignorant of the language and without many social contacts, how do non-soccer playing Africans survive in Vietnam? Some buy factory rejected, irregular clothing to sell back home. A few marry locals and open businesses. An allAfrica article from 2009 reveals another mean of survival:

Government of the Eastern Asia Socialist Republic of Vietnam has embarked on a serious crack down of Nigerians resident in the country following a wave of anti-social and criminal activities reportedly being perpetrated by Nigerian immigrants.

This echoes reports from neighboring countries. In 2013, there was this Nigerian Monitor article, “[SHOCKING] 20% of Nigerians in Thailand are in jail,” with most of the 400 locked up for drug offenses. In 2011, the head of the Nigerian Association of Cambodia, Okere Ugochukwu Emmanuel, was busted for drug trafficking. On a more positive note, the head coach of the Cambodian national basketball team is a Nigerian. Despite Austin Abayomi Koledoye’s tireless and patient instructions, however, the double dribblers from the Land of Angkor still rank among the worst in this galaxy. We’re not all born to slam dunk.

With its American fast food joints, foreign models, black star athletes and the beginning of black neighborhoods, Vietnam is looking more multicultural and progressive (in the American sense) by the day.

This transformation also includes annual gay parades, of course, with the first in 2012. The Atlantic, Guardian, Bloomberg, Huffington Post, NBC, BBC and CNN have all praised Vietnam’s progress on the LGBT front. A Hanoi photographer, Maika Elan (real name Nguyễn Thanh Hải), won a World Press Photo Award for her series depicting gay couples at home, and a Saigon transgender bodybuilder, Kendy, was profiled by Narratively. Hanoi’s Kênh14 now has an annual feature, “Ten Most Beautiful Homosexual Relationships of the Year.”

When I left Saigon in 2001, rap music had no currency, but now there are dozens of prominent rappers, with “Secret Shows” popping up suddenly on the streets, as organized through social media. During those sinister days of hardcore Communism, there was no way the police would have tolerated this.

In the South, soon after the communist victory, the party officials and military commanders on the spot declared open season on the previous regime’s culture. Gangs of young enthusiasts were secretly ordered or incited to destroy as much of this culture as they could. Early in May 1975, Communists burned every book in the libraries of the Saigon University Faculty of Law and Faculty of Letters; the books, they said, came from a “decadent culture.” Circulation of all other books, as well as art works such as music tapes, records, films, and even paintings, was prohibited. Communist youths went from door to door to search out and confiscated books and materials considered antirevolutionary.

Among the banned cultural products was “Golden Music,” love ballads, with lyrics often by well-known poets. Just for listening to this stuff, you could be locked up. Consider the case of Hanoi’s Nguyễn Văn Lộc. After the Communist takeover in 1954, Lộc and a small group of friends would gather in private homes to sing these ballads to each other. In 1968, this ballad-loving ring was finally exposed, with the entire seven-member gang arrested. First kept in The Furnace, better known to Americans as Hanoi Hilton, they were finally put on trial in January of 1971, with three men slammed with sentences of 15, 12 and ten years.

With “clemency,” Lộc served eight. Waiting patiently all this time, his girlfriend married the stigmatized man when he finally got out. After decades of struggle, Lộc now owns a café named Lộc Vàng [Golden Lộc] on the edge of Hanoi’s Western Lake. His friend Toán wasn’t so lucky. Broken and destitute after prison, the man died homeless in 1994. Lộc:

I marvel at how bitter my life has been. For doing nothing but loving music, I ended up in jail. Now, this kind of music is revived, and these songs are sung on TV. When I hear other people sing them, tears gather in my eyes.

Beneath this veneer of sidewalk hip hop shows, gay parades and transsexual bodybuilders, Vietnam is still very much a totalitarian state, however, for many people, priests, monks, journalists and bloggers, etc., are still imprisoned for thought crimes. Influential blogger Điếu Cày, for example, was locked up for 6 ½ years on trumped-up charge of tax evasion. He was kept in filthy, dark, solitary cells and beaten up. In 2003, Phạm Hồng Sơn was slapped with a 13-year-sentence for translating and disseminating “What is Democracy?” an article he found online. Sơn ended up serving 4 ½ years. Last May, dissident Father Nguyễn Văn Lý was finally released after eight years in prison.

Wealth in Vietnam also flows straight to the top, for its fattest cats are senior Communists. Gorging on graft, they own the swankiest nightclubs, send their kids to American universities and jet around at will to splurge on this world’s pleasures. With no free press or independent judiciary, corruption can’t be checked, so cops shake you down, professors sell grades, doctors demand tips before treatment and officials of all ranks sell favors and extort.

The United States has also been studying the Communist playbook, for it’s now legal to jail or even kill a citizen on the most nebulous charges. American laws are already totalitarian.

Linh Dinh’s novel Love Like Hate covers Vietnam in the 20th century. His Postcards from the End of America has just been released by Seven Stories Press. He maintains an active photo blog.