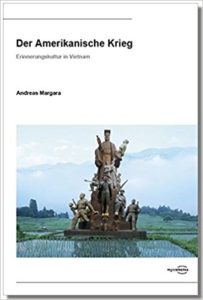 Andreas Margara’s book on the ways in which the Second Indochina War, or the American war in Việt Nam, is remembered in contemporary, reform/Đổi Mới-era Việt Nam leaves me of two minds.

On the one hand, Margara does a commendable job of bringing to a German readership a comprehensive treatment of various aspects of Việt Nam’s “culture of memory,” focused in large measure on state- and Communist Party-sanctioned public commemorative sites and rituals, but also on remembrances of the war in literature and art, popular culture, and private practices that may at times provide subtle counter-narratives to official lines. The book situates the topography of commemorative practices within such disparate contexts as theories in the field of Memory Studies and the increasing touristic commercialization of violence and trauma.

On the other hand, Der Amerikanische Krieg tends to promise more than it is able to deliver. Despite a claim of “field research” (17), the author’s original contributions in this study are rather limited and mainly evident in a few interviews conducted, and personal observations and photos made, at war museums, battle site memorials, and other historical markers Margara visited in Việt Nam. There is no apparent original research in Vietnamese sources, nor any attempt of a close textual analysis of the commemorative displays at hand. Margara vastly overstates the extent to which Vietnamese archives and other source materials on the war remain off-limits to historians (17)—although access can indeed be spotty and capricious—and that claim may obscure the fact that his Vietnamese language abilities are insufficient to conduct research in original primary sources. As a result, the book’s insights by and large are mediated through much American and some German scholarship on the war and Vietnamese culture and politics. The few Vietnamese-authored works were consulted in their German or English translations. The text is nevertheless liberally sprinkled with the supposed Vietnamese equivalents of key terms or phrases, some of which are misspelled, incomplete, misapplied, or mistranslated (25, 34-36, 40, 42, 89 et al.).

Despite the comparative absence of original scholarly contributions by the author, there is nothing wrong per se with presenting to a broader German audience, in book form, an overview of the state of the field of Memory Studies regarding Việt Nam. It is, however, ironic that the back cover—perhaps not even written by Margara himself—bills the book as much more: “To this day, our picture of the Việt Nam War is shaped by American historical scholarship and culture of memory,” it declares. “But we know far less about the Vietnamese perspective and especially about the remembrance of the ‘American War’.” This claim stands in stark contrast to the fact that the book engages in a synopsis of precisely this American scholarship on Việt Nam and adopts many of its tenets; it undermines the one strength of Der Amerikanische Krieg, namely, that its summation of the US-dominated field of Memory Studies is presented quite well and exhaustively, relying in particular on the works of Hue-Tam Ho Tai and Christina Schwenkel.

If Margara proves to be comfortable with, and knowledgeable about, the field of Memory Studies, his command of Vietnamese history and events surrounding the war is a bit shaky, for example, with an over-emphasis of Confucian influences in Vietnamese culture and inaccuracies or insufficiencies in describing events in 1945 and 1954 (25 n.37, 48). The author falls into the trap of the false, Cold War-era binary between a supposedly discrete “North Việt Nam” and a presumably homogeneous “South Việt Nam” that still stubbornly plagues much of Western scholarship on the war in Việt Nam. With the stated goal in Der Amerikanische Krieg of offering insights into a “Vietnamese perspective,” a real opportunity is thereby lost to bring to a Western audience an understanding of the much more complex ways in which revolutionary Vietnamese, their anti-communist opponents, and “Third Way” neutralists made and fought for rival political and spatial claims. Instead, reductionist terminology of “the North” and “the South” predominates. For example, Margara states that women in the northern half of the country habitually participated in armed struggle, “but that was not the case in the South” (46). Later, however, he prominently quotes a southern female guerilla fighter recalling her wartime armed exploits (85), as if those not loyal to the Sài Gòn-based Republic were not also part of “the South.” In the same vein, Margara, following much Western writing, incorrectly refers to the People’s Army of Việt Nam as the NVA (“North Vietnamese People’s Army”), despite the army’s all-Vietnamese operational claims.

The book’s presentation of its arguments is somewhat chopped up, betraying its origins in a Master’s thesis. Outside an introduction and a conclusion, there are three main chapters: Representations of the War by the State; Private and Individual Remembrance; and Post-Đổi Mới Transformations of the Culture of Memory. Since many war cemeteries and practically all of the commemorative sites, museums, statuary, and war-related literature and art analyzed in Der Amerikanische Krieg are of a post-Đổi Mới provenance, the choice of chapter divisions is a bit odd and accounts for the occasional repetitiveness in arguments.

All told, Andreas Margara’s book promises more than it is able to deliver, but also would have had more potential if only greater care in its pre-publication preparation had been exercised. The author has acquired an admirable amount of expertise on the entire spectrum of Vietnamese Memory Studies, as presented in Western—mainly US—scholarship.  It is a laudable endeavor to bring these scholarly insights to a broader German audience. On the other hand, Margara’s lack of expertise in other areas of Việt Nam Studies become apparent and distracting at times. Instead of a rush to publication, these shortcomings could have been remedied with a thorough peer review by experts with Vietnamese language abilities and careful and discerning editing.

A medic in the Vietnamese refugees crisis around 1980, Christoph Giebel in 1986/87 became the first West German student to study in post-war Việt Nam. He earned his Southeast Asian History PhD in 1996 at Cornell University. At UW-Seattle since 1998, he frequently leads UW programs to Việt Nam, focused on legacies and memories of war.