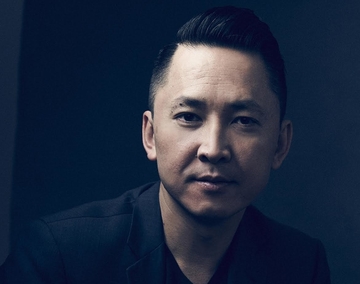 This op-ed essay by diaCRITICS publisher Viet Thanh Nguyen is a reprint from The NYT Opinion section on Jan. 20, 2018.

If you enjoy reading this reflection on fatherhood from the Vietnamese perspective, you might also enjoy this video poem performance of Bao Phi’s “Future Letter to Daughter”, originally posted (Jun 16, 2016) as part of our Out of the Margins literary series.

A bathroom at 4:45 a.m. is quiet. I try to wake at this time, three hours before my 4-year-old son does, so I can write, even in a hotel bathroom. I have not checked email, Twitter or Instagram, and last year I got off Facebook.

I have not regretted it. Facebook was constant stimulation, distraction and turmoil — constant noise — and what I have longed for the past year was peace and calm. I want these things so that I could listen and write, but also so I could be a better son, father, husband and human being, which are all just as difficult, if not more than so, than being a better writer.

I had been gentle with my 82-year-old father during Christmas, but as I prepared to leave his house, I snapped at him when I felt that he had nagged me one too many times. I immediately regretted it. All he wanted was for me to listen to him.

That regret was surely on my mind when I took a walk after dinner later that night with my wife and son, and a man pushing a shopping cart loaded with his belongings asked me for the box of leftovers I had in my hand. I hesitated. It had half a pizza that my son would surely demand as soon as it was bedtime, but I gave it to the man, along with $2. My wife observed that I would not normally do such a thing.

But I had been doing such things whenever my son was with me, rolling down the window of my car when he was in his Batman car seat behind me, so I could give an old man on the median a dollar. I wanted to teach my son a lesson about generosity, and I wanted to be, in his eyes, a kind person.

He is cognizant and curious about morality and ethics, at the level of preschool behaviors, parent-child negotiations, apocalyptic superhero conflicts and science fiction wars. As most parents would, I have tried to teach him about giving, sharing, listening and empathy. And yet in my own life, away from his gaze, I have sometimes failed in all those respects.

My own ambitions and the dreadfulness of our political world consume and distract me. I taught my son the face and name of the man who is president, along with a few negative words for him. That was wrong. Not just for the sake of the person who is president, and for all the people who voted for him, but for my own sake. To call someone else stupid is to release anger, bitterness and vitriol into my own bloodstream, poisoning me. I need only to read the Twitter feed of Donald Trump to see this happening.

Let that not happen to me, that I become like him. Let me empathize with him, so that I can understand him and feel for him as a human being, even as I oppose him in almost all matters.

A meal I shared with a Vietnamese-American Buddhist monk provoked some of this thinking. At the end of our meal, we closed our eyes and meditated, focused on our breathing, on the passage of air over our upper lips, on the stillness within ourselves.

I listened to his steady, quiet voice guide me and my breathing. I believe, as he tells me, as my Catholic tradition tells me, that there will be no end to war until each of us calms the conflicts within ourselves. A simple task, to change only ourselves, and yet such a difficult one. I resolve to hold the shell of my self up to my ear every day, to listen to the sound of my own self, before I set out into the unsettled world, as I must.

While our religions instruct us to behave ourselves, I find that my son teaches me, too, even as I teach him. What have I learned from our relationship this year? That we must believe in what is good and right, without demonizing those that we oppose; that we must fight for what we believe in, without recourse to hate or insults; that we must give, in ways great and small, to distant organizations and the people we meet face to face; that we must connect to others who believe as we do, and grow our values and our organizations; that we must write and read what is meaningful, and ignore the morass of public opinion and media-induced emotions.

If we all do this, perhaps we can change our country, even in the face of entrenched power, the oligarchy of billionaires, the fear and hatred of those who feel powerless. It will take years to stop the tax cuts and the environmental assault, and it may take forever to stop our forever wars and to dismantle racism and patriarchy. But we can stop the moral and political degradation. We can say: Me, too, or I support you. We can say: Enough. We can say: What can I do?

I gave money to Mai-Khanh Tran, a California Democrat who might beat the Republican incumbent, Ed Royce, in a House race. I support Pivot, a Vietnamese-American progressive network started by my brother, Dr. Tung Thanh Nguyen, who resigned from a White House commission rather than serve the current administration. I gave money and raised money for the Diasporic Vietnamese Artists Network and its blog, because I believe that arts and stories matter in changing our minds and therefore our world.

That is true for all of us. Not everyone will listen, caught up in the noise, but enough might. Those who do not listen will never know what those who listen do: that it is the listening itself that matters, that listening is what connects us to others, and ourselves.

Please note that this essay was first published in The New York Times Opinion section on 1/20/18.

Viet Thanh Nguyen, a contributing opinion writer to The New York Times, is the author, most recently, of “The Refugees,” and the editor of the forthcoming “The Displaced: Refugee Writers on Refugee Lives.” He is the founder and publisher of diaCRITICS.