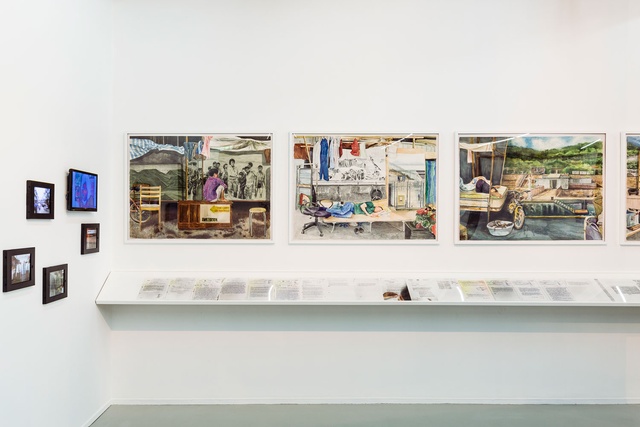 Tiffany Chung’s works from her Vietnam Exodus Project are currently exhibiting as part of the 21stBiennale of Sydney in Australia. In Tiffany’s artist talk, which was recorded at Artspace, she discusses her ongoing research and projects on forced migrations, which along with the Vietnam Exodus Project comprises of the Syria Project and the Global Refugee Migration Project.

“I started looking into the history of the Vietnamese refugee crisis since 1975 until 2000. According to the UNHCR, the crisis stopped around 1995/1996 but in reality the last refugee camp in Hong Kong got shut down in 2000… I started out in 2009 looking at different conflicts and the aftermaths of the twentieth century, and the Vietnam conflict was one of them – and I also looked into the refugee crisis. However, it was too close to home, so after one project I had to put it on hold until 2011. [Meanwhile] I was working on this dance performance project investigating the kome sōdō or rice riot in the 1918 in Japan. And at the time at the end of 2010, beginning of 2011, that’s when we had the Arab Spring swept through the North Africa and Middle East. To me it was very moving… because I was working on this kome sōdō, which is this massive protest that erupted in imperial Japan in 1918, and now you have this protest and this revolution sweeping through the Middle East and I thought, how appropriate.

So I started following the situation in Syria and I started collecting infographics, data, and a lot of research materials, trying to understanding … this convoluted war, from revolution to the war. And after a while it was no longer about that. There’s no way I could actually unpack that conflict. It’s convoluted.

So I thought what would be the most pressing issues right now that I need to pay attention to right now? And of course it’s the refugee crisis that we have been hearing and seeing over the past seven years. So I started working on that, and then at the same time I realized the reason why I was so obsessed with this Syrian refugee crisis is because it bears striking resemblances to the Vietnamese exodus history: the colonial history, the civil war, and the aftermath of the war, where almost two million people fled the country and almost one third of them, by some estimates, died at sea. This is such a huge history and the most important thing about this history is that it has been erased into oblivion in Vietnam by the government. So, for me, it’s important to look back because that’s part of my history, my family history as well.

I started out by looking at the way we migrated through the entire world, not just from Asia to the US or to Europe. And what I found out is, when I started doing research at the UNHCR, I have collected a number of corresponding cables around the time of the refugee crisis, two weeks before the fall of Saigon in 1975 and a month after that. Those are the selected records that I have right here. And when I went through a lot of these records – and this is just a fraction of what I have found – I started to realize that we have gone all over the world.

I started by reconstructing the boat trajectories out of Vietnam, so if you look at the map right here, you can see the red arrows that shows the routes that the boats took out of Vietnam to go to different parts of Asia. After that I had to compile a list of all the host countries, whether [they] have hosted Vietnamese refugees temporarily, as a quick transit point, or as a port of first asylum which were refugee camps or detention centers, or the resettlement countries. That’s how I reconstructed this map…”

Tiffany goes on to describe living and working in Vietnam, which she returned to in 2000, and the challenges of addressing what she describes as ‘politically driven historical amnesia’. You can hear the rest of this conversation at the Artspace website at 21st Biennale of Sydney Artist Talk | Tiffany Chung. Tiffany Chung is joined in discussion by 21stBiennale of Sydney Artistic Director Mami Kataoka and Artspace Executive Director Alexie Glass-Kantor.

About the 21st Biennale of Sydney:
From 16 March – 11 June, SUPERPOSITION: Equilibrium & Engagement, curated by Artistic Director Mami Kataoka, presents the work of 70 artists and artist collectives from 35 countries at the Art Gallery of New South Wales, Artspace, Carriageworks, Cockatoo Island, Museum of Contemporary Art Australia, Sydney Opera House and 4A Centre for Contemporary Asian Art. The Biennale of Sydney is located on the traditional lands of the Gadigal people of the Eora nation. We acknowledge the traditional custodians of the land and pay respect to Elders, both past and present.

You can learn more about the art work of Tiffany Chung in this past diaCRITICS art review (by Lien Truong), based on Chung’s installation work at Galerie Quynh in HCMC, 2014:

Sheila Ngoc Pham is a writer, producer and broadcaster based in Sydney, Australia. She’s produced radio documentaries and programs for ABC Radio National including The Lost Cinema of Tan Hiep and Saigon’s Wartime Beat, and her writing has appeared in a wide range of Australian and international publications including The New York Times, Roads and Kingdoms, Womankind and New Philosopher. She is currently a PhD candidate at the Australian Institute of Health Innovation and lectures in public health ethics at Macquarie University.

Sheila Ngoc Pham is a contributing editor to diaCRITICS for stories of and from the Vietnamese Australian diaspora.

His films are not just an artistic statement but also his diary, a place where he can tell his struggles in life, through fear and love, from his own feelings and emotions.
Read more
Literature