Vietnamese performer Mai Khoi made her first NYC appearance with her band, The Dissidents, at National Sawdust, presented by PEN America and Artists at Risk Connection (ARC), on 9/11/18. Monique Truong writes about the performance by this Vietnamese songwriter and popstar who has been banned from performing in her own country due to her political activities.

All photographs by: Damijan Saccio.

“I know you like my jacket,” Mai Khoi said to the hushed audience gathered at National Sawdust, an artist-led, nonprofit performance space in Williamsburg, Brooklyn on September 11, 2018. From Vietnam, her band, the audaciously named trio Mai Khoi and the Dissidents, had just taken the stage for their NYC premiere and were settling down to their mikes and instruments.

I liked her jacket, a loose fitting, silvery allover sparkler that reflected the light. I liked even more the declarative tone of her first words to us. She could have phrased them as a question, but she didn’t. Her intention and inflection were playful and self-assured. The audience picked up on both, and appreciative laughter and sartorial respect lapped toward the stage.

Content and style-wise, Mai Khoi was following a whole lot of fabulousness. The evening’s line-up began with Paul Tran, a Vietnamese American performance poet and a recently named 2018 Ruth Lilly and Dorothy Sargent Rosenberg Poetry Fellow. Tran’s ensemble featured romper shorts, a Frida Kahlo crown of pink roses, and a scorching selection of poems. As I’d seen and heard Tran before, I’d expected no less from them.

I knew less about Mai Khoi, primarily that in 2010 she won the Vietnamese Song and Album of the Year Award but now has been banned from performing in her country because of her political activities. Also, she was often called “the Lady Gaga of Vietnam.”

I always disliked that kind of relational understanding and comparison. It was imperfect and lazy. I wanted to experience a Mai Khoi who is the Mai Khoi of Vietnam. Given her opening words to us, I could tell that she was more than capable of defining herself.

“This song may hurt you a little bit,” the reflective one warned us, before launching into her first song, “Bus Trips.” The lyrics, translated into English, appeared behind her, projected high onto the back wall of the double-height space. Her black hair, worn loose and falling forward, threatened to tangle with the strings of her acoustic guitar as she began to play. To her right, Quyền Thiện Đắc on tenor sax—one of the seven or so reed instruments including a kèn đám ma, a.k.a. a Vietnamese funeral oboe, which he would expertly play that night—was already the sonic equivalent of a carton of cigarette smoke, giving us all of the atmospherics and none of the cancer. To her left, Nguyen Duc Minh was seated on the floor of the stage behind an orchestra’s worth of drums and other percussive instruments, bamboo flutes, a kèn đám ma, and his specialty the Jew’s harp. Mai Khoi’s singing voice, once unleashed, was many degrees warmer and more full-throated than her speaking voice. It growled and it witnessed. 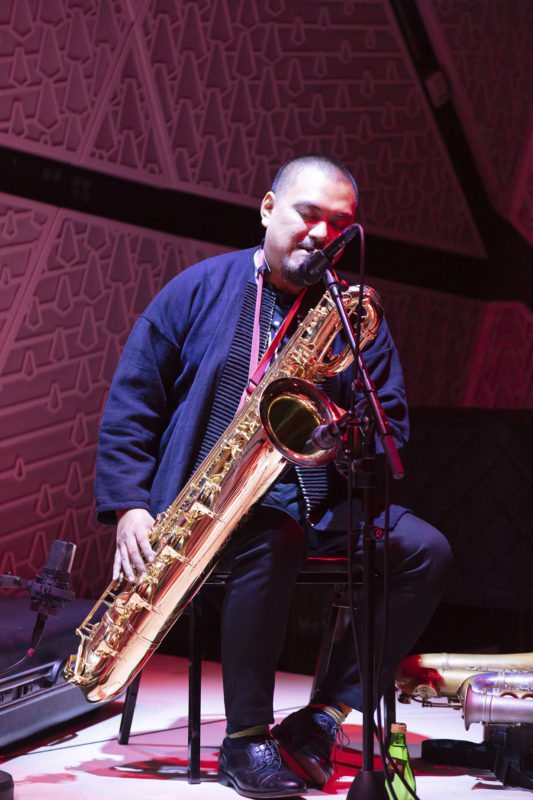 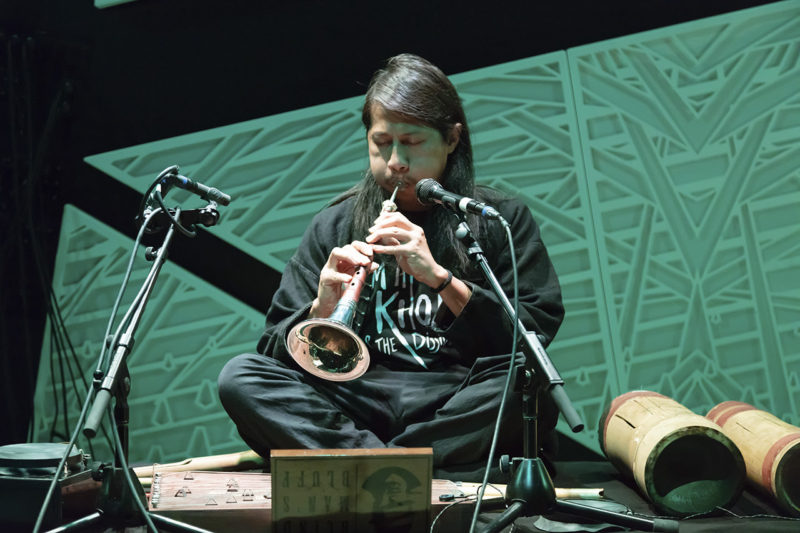 Scream after
scream in the streets,
Green uniforms arresting
people,
Blood flows in front of me…

Again, Mai Khoi was right. All of her songs that evening would hurt because they emanated from a young woman seemingly betrayed and heartbroken.

In “Please, Sir,” her voice cajoled and pleaded. If it weren’t for the lyrics, I would have thought it a ballad of desire or seduction. 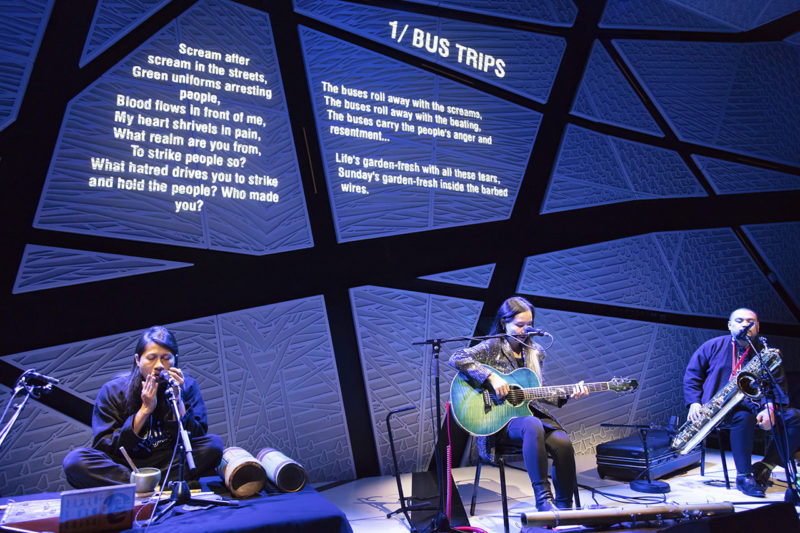 Throughout the band’s eleven-song set list, Mai Khoi’s lyrics declared, boldly and without a doubt—they were literally the writing on the wall—that she’s a citizen of a country that systematically controls and silences the free expression of its populace. Her voice, whether defiant and soaring or supple and evocative, declared another truth. Mai Khoi also belongs to a borderless territory, more difficult to contain and police, where generations of musicians, writers, and artists worldwide have created within and called home. That territory exists in every country, and since 2002, the Human Rights Foundation has awarded the Václav Havel International Prize for Creative Dissent to its most inspiring, at-risk inhabitants. In 2018, Mai Khoi was one of the recipients, along with the Sudanese rapper and former child soldier Emmanuel Jal, and the Belarus Free Theater.

In the Q&A that followed the concert, Mai Khoi and Paul Tran shared the stage, and the bonhomie between them was palpable. Elena Park, the curator of NationalSawdust+, the in-house performance and conversation series, which along with PEN America and Artists at Risk Connection, had brought the two together, began by asking, “Where do you get the courage to do what you do?”

“The mission of the artists is to speak the truth,” Mai Khoi replied, adding that it was also “to step out of the fear.” Tran followed with an equally elegant characterization of that mission as “the resistance to the agony of the untold story.” Tran could have been describing Mai Khoi’s source of strength and vice versa.

Mai Khoi, born in Nha Trang, and Paul Tran, born in San Diego, belong to the same map-less geography, where truth telling and creative defiance are the birthrights, and the national costumes are sparkling jackets, romper shorts, and a crown of fresh roses. Who among us will live there with them? 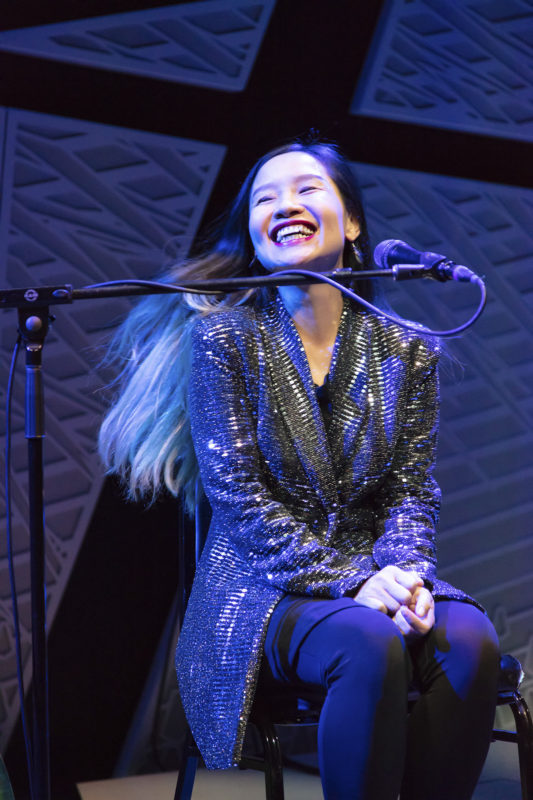 You can learn more about Mai Khoi on her website: mai-khoi.com/bio

The music of Mai Khoi & The Dissidents is available for purchase at: http://phonofile.link/dissent-live-at-ph-sa-lab

All photographs courtesy of Damijan Saccio. 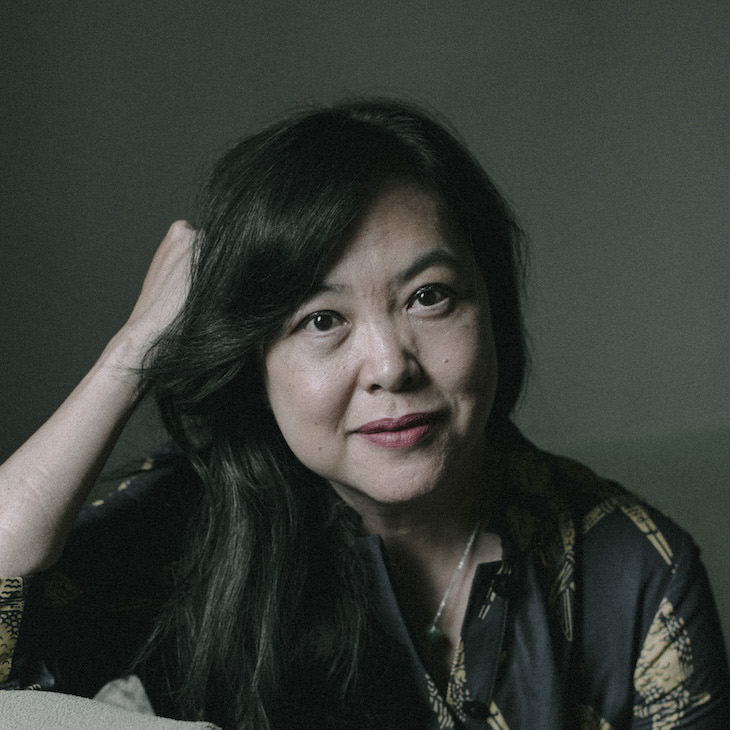 Monique Truong is the Vietnamese American author of the bestselling, award-winning novels, The Book of Salt (Houghton Mifflin, 2003), Bitter in the Mouth (Random House, 2010), and the forthcoming The Sweetest Fruits (Viking Books, 2019). // monique-truong.com