April 30, 2019. Although I don’t engage in explicit ceremony or ritual around it myself, this day does not pass for me without many thoughts and feelings, and an awareness of the weight of how this date marks our diasporic history. A current, an undertow, a reminder of just how connected I still am—despite all the distances and differences—to a Vietnamese collectivity.

To start off our remembering/re-membering about April 30th (a mini-series of posts we’ll be continuing into May here on diaCRITICS), this week we are highlighting the Missing Piece Project, a collective art/action project – which, in their words, is a “collective intervention” and a material staging of “memory work” for Vietnamese and Southeast Asian refugees in regards to our namelessness at – our omission from – the U.S.’s own (officially recognized) memory work via the Vietnam Memorial Wall in Washington DC.

Read on below to get a summary of the Missing Piece Project’s vision and plans, and see some examples of objects they have thus far dedicated at the Wall.

Also: stay tuned for an in-depth collective interview with members from the Missing Piece Project, coming in May.

***The Missing Piece Project will be featured (as a documentary short) in the Los Angeles Asian Pacific Film Festival this year. Screening is May 9, 2019, with filmmakers in attendance.*** (Director: Daniel Luu; Producer: Kim Nguyen Tran)

“All wars are fought twice, the first time on the battlefield, the second time in memory.”
~Viet Thanh Nguyen

The Missing Piece Project envisions a nationwide, coordinated, mass dedication of objects at the Vietnam Veterans Memorial of Washington DC (the Wall) by Vietnamese, Lao, Cambodian, and other communities still affected today by the legacy of the conflict in Southeast Asia, allowing these communities to reclaim their past experiences, history, and memories, on their own terms. The collective dedication will take place on the 45th anniversary of the “end” of the Vietnam War on April 30, 2020. A pilot version of the project occured on April 30, 2018, with a small dedication of objects from the VietUnity-Los Angeles community. In coming years we aim to expand the project to be more inclusive of the diverse communities affected by the war.

A Collective Intervention: Creating Space for Memory Work at the Wall for Refugees

One of the most visible and public ways that the US has remembered its involvement in the Vietnam War is through the somber, black, wall erected on the Washington Mall in our nation’s capital. The names of US veterans who died during the conflict are engraved into the Wall, while reflecting back the faces of visitors in its polished black marble. The Wall has been hailed as a profound site of healing for those that visit, often leaving items there dedicated to fallen loved ones or to let go of traumatic experiences.

There are no Vietnamese names on the Wall. Framed in the nationalist context of the Washington Mall, this memorial conveniently “forgets” the Vietnamese (both civilians and veterans alike) and “remembers” American veterans as the primary victims of war. Yen Le Espiritu writes that “without creating an opening for a Vietnamese perspective of the war, these dramatic and public commemorations of the Vietnam War refuse to remember Vietnam as a historical site, Vietnamese people as genuine subjects, and the Vietnam War as having any kind of integrity of its own.”

Since its opening in 1982, national park rangers have collected all items left at the Wall, which are catalogued and stored in a national archive. During a visit to the archive in 2015, with the help of archive staff, I found that only six items had been left by members of the refugee community, out of thousands. There has been both an explicit (the names of your dead are not here) and implicit (this space is not for you, don’t leave your items here) exclusion of refugee voices from this national memorial.

The Missing Piece Project calls for a collective intervention at the Wall by Vietnamese, Cambodians, Laotians, and other refugee community members still affected today by the legacy of American militarism and imperialism in Southeast Asia, allowing the community to reclaim their past experiences, history, and memories, on our own terms. This project envisions a nationwide, coordinated, mass dedication of items at the Wall by refugee community members on the upcoming April 30 anniversary in 2020 (45 years after US military withdrawal from Vietnam).

The coordinated, mass dedication of items from the refugee community at the Wall on April 30, 2020 would act as a physical and symbolic disruption of the US nation state’s memory project that justifies US militarism and imperialism in Southeast Asia and other parts of the world through the “forgetting” of its victims, both in the past and present. This intervention centers refugee experiences in ways that refugee community members will determine for themselves, as a collectively curated archive of objects and memories, rather than one designed by state institutions or policy-makers. The open nature of the collective archive insists that the refugee community is not a monolith; that there are complex disjunctures, contradictions, and intersections in our identities and in the ways that we remember the conflict and its continuing legacies felt in our everyday lives today. This project carves out space for a public, nationally recognized memorial formed from the collective engagement of diverse voices in the refugee community rather than one determined by the policies of any single institution.

[The above passages are excerpted from the Missing Piece Project website and a project statement by Kim Tran, the project leader.]

Here are a few examples of objects dedicated during the April 30, 2018 pilot version of the Missing Piece Project. View an online gallery of all the objects here.

A Kroma ក្រមាខ្មែរ (scarf) submitted by Andrea Ng, to represent the experiences of her friend June Yihouy Bo and her family. Accompanied with an essay titled “Has the War Really Ended for Cambodians?” by Andrea Ng. 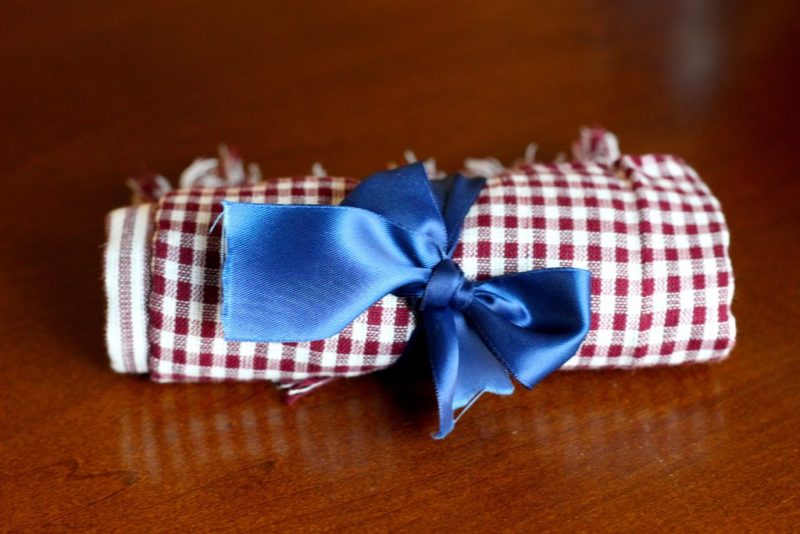 Folded boats made from paper, funeral money, prints with “the things they carried” (refugees) on boats, and water imagery. By Tiffany Le. 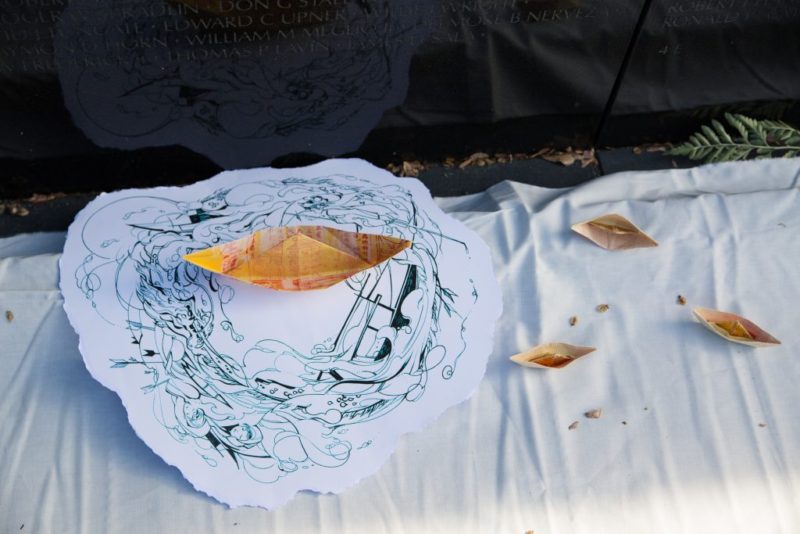 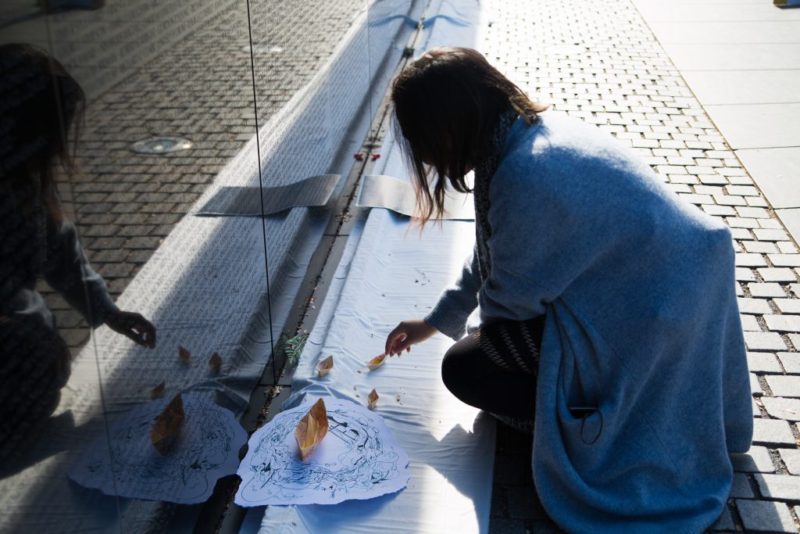 Bottle of cultural experiences within the Cambodian, Pilipinx, Japanese, Vietnamese and broader Southeast Asian community for self-healing to build confidence to learn about personal family history. By Daniel Luu. 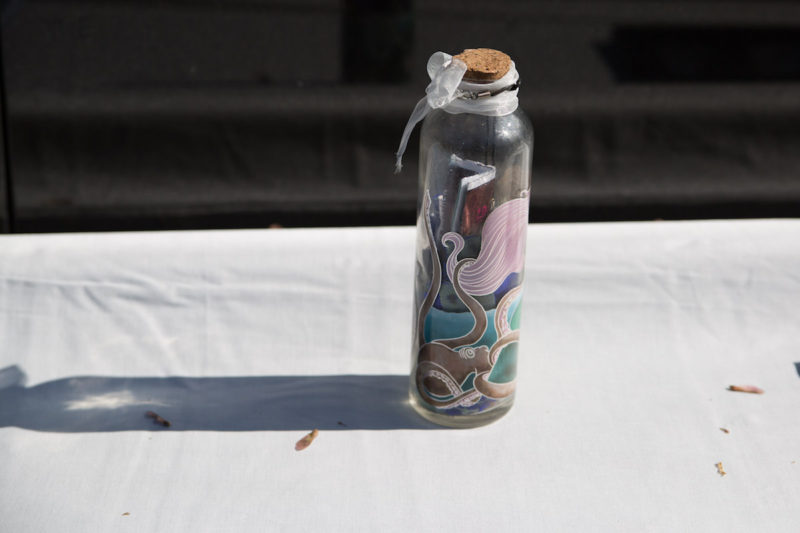 Poem written by Minh Vo, translated and framed by her daughter, Kim Pham. 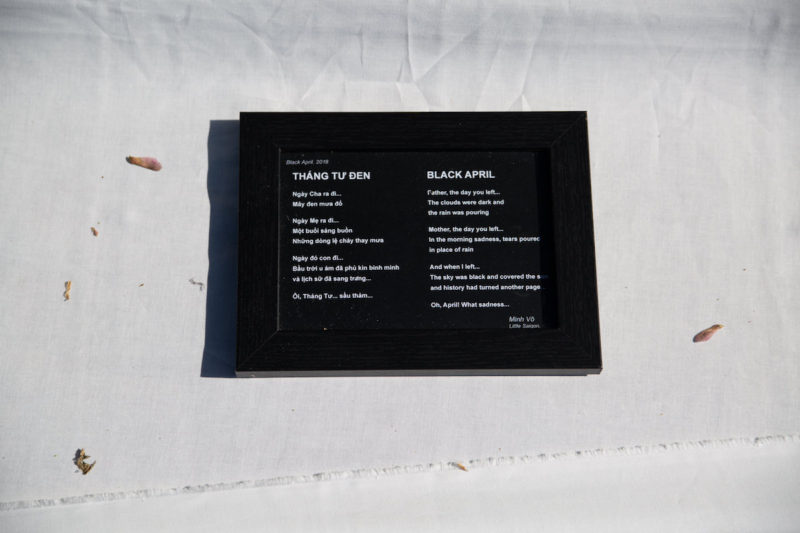 A white piece of fabric symbolizing a Vietnamese (khăn tang) funeral/mourning fabric, across the entire length of the memorial. Accompanied by two videos of artist Antonius Bui speaking about the object and its meaning. 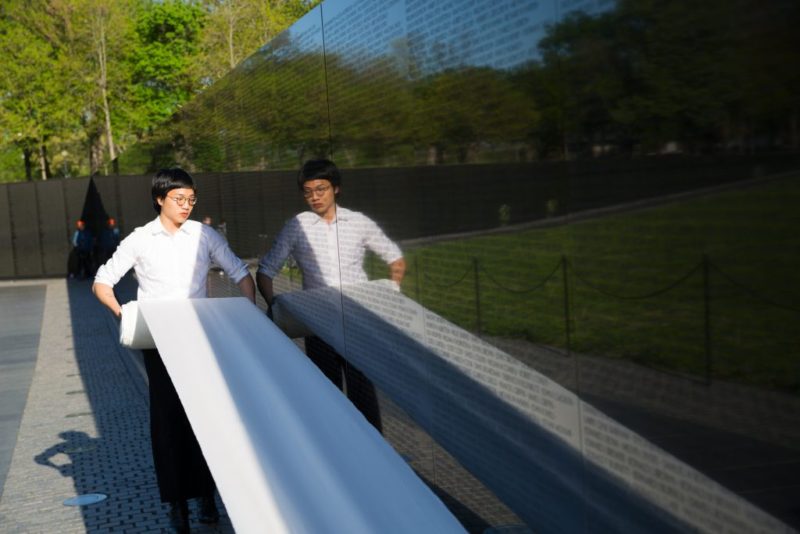 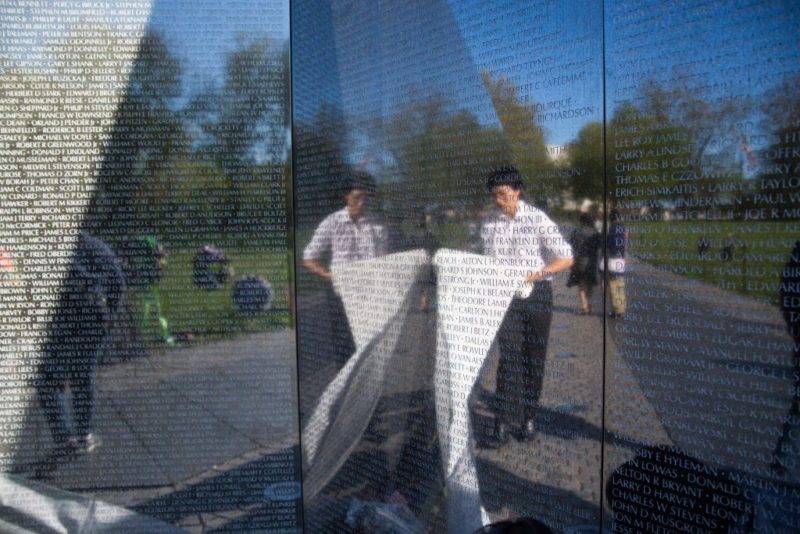 You can learn more about how to get involved at: missingpieceproject.org/about/

Landscape Memory, a three-channel video installation by artist and organizer Boone Nguyen, explores the complexities of diasporic remembering as Nguyen returns to the rural village where his extended family lives in Vietnam. The video documents and juxtaposes varying ways of remembering and honoring the dead, such as cleaning burial sites and burning incense, with bomb crater-turned-lakes, reclaimed over time by nature, in addition to the act of the journey itself.
Read more
Art

From The Missing Piece Project's virtual dedication for April 30, 2020: "Imagine this: a queer future, a decolonial future."
Read more
Art