THIS IS FOR MẸ: Arriving at Joy, with Ocean Vuong

Truc Ho reflects on Ocean Vuong’s recent book reading and Q&A in Seattle, revelling in his poetry, prose and prophecy.

The first time I read On Earth We Are Briefly Gorgeous, I got off the bus three stops early and cried outside of a 7-Eleven. So, when Ocean Vuong came to Seattle for a collaborative event hosted by the Seattle Public Library and The Elliott Bay Book Company, I knew I had to attend. My friend and I got to the library early, an hour early in fact, in order to get good seats. Once we got inside, we were told to grab a seat up front. The first two rows had been reserved for people of color.

“It was in this city, for the first time, I saw Vietnamese street names, with the correct diacritics and the accents. I cried, I couldn’t believe it,” Ocean Vuong said as he greeted the audience of hundreds in the Microsoft Auditorium of Seattle Public Library. I could see him choking back tears.

Growing up in Seattle, near the International District, I didn’t realize the significance of this act until Vuong pointed it out. This seems to be a common experience of seeing Vuong and reading his works. He always seems to be unravelling the ways I see and understand the world.

Vuong followed this heartfelt introduction with a seven-minute reading from a chapter of the book. There was no background music, just Vuong’s voice carrying us through Little Dog’s world, yet for a moment I felt like I could feel every single word as though I was Little Dog. He prefaced the reading with these words: “What I was interested in as a novelist was to turn the eye, the first person narrator… I wanted to turn the eye into a way to cast addition onto those around the protagonist’s life. In this case, his mother and his grandmother.” Vuong listed off literary classics such as Moby Dick and The Great Gatsby, which found international claim by telling stories through the narrator’s gaze. He reminded the audience that Vietnamese refugees, women, mothers and grandmothers, hold as much weight as any white literary icons.

Vuong then introduced the audience to his novel’s main character, Little Dog, in a scene where he is seven. He is moving through an episode that his mother and grandmother are experiencing. Within this short excerpt, it is clear that Vuong has roots in poetry. With Vuong’s voice rising and falling in assonance and consonance, each sentence ending with a short pause rather than a period, the silence speaks where words fail. Throughout the seven minutes, the audience held a collective breathe, tension circulating through the room as Vuong’s voice rose, replicating the shout of Little Dog’s mother in the book.

“I look at him in the eyes and do what you do, I refuse to die,” Vuong read, concluding the emotional reading. There was a short moment of silence, enough for the lines to sink into the audience’s minds, before a thundering applause followed.

The small excerpt allows readers to see the different questions the book explores. What do you inherit from your parents? How do you live with that? What would you tell the younger you? Vuong refuses black-and-white answers, dancing between the grays of history and memories, elusive traumas, forgetting and remembering, love, joy, and pain – something he later on affirmed in the Q&A. That’s what is so powerful about Vuong’s words, they propel listeners inward, to see the past, the present and the future.

The event then moved us into a conversation between Ocean Vuong and Jess Boyd, a writer, birth worker, activist and community builder, local to Seattle. Boyd curates the “THIS IS FOR MẸ” feature on diaCRITICS, focused on mothers, motherlands, mother-tongues and family. The conversation between the two writers flowed organically as they explored the experiences of being raised by women, crises of language, and the experience of being a writer under capitalism. Vuong’s words were ethereal throughout, every sentence feeling like I should be listening twice to make sense of the meaning.

Instances such as Vuong stating firmly, “Where there is epigenetic trauma, simultaneously there is also epigenetic strength.” Unexpectedly, he follows by describing the ways Little Dog’s mother and grandmother taught him about finding beauty. Being able to find beauty is a method of survival. I was hooked and moved. I wrote down these words onto my notebook again and again. For the first time, I witnessed a coming-of-age novel that rejected the Western notion of the violence in becoming. “What happens to a country when our men and boys need a magic spell to do something as humane as touch one another?” Vuong posed the question. Gentle murmurs filled the room for a moment. I remember nodding so hard my glasses slid off my face.

“So, when is the third book?” is a popular interview question I have seen from his press tour. Understandably so, I think, as I look at the filled auditorium.

Yet when asked how Vuong defines success, he described how success in the U.S. has always been defined by capitalism and, thus, a career as a writer has never felt like a given for him. Writing, for Vuong, is having a vision beyond a bestseller. Vuong is incredibly aware that being a writer, an artist, a poet, doesn’t liberate him from the structure of capitalism. So he writes to answer his questions of crises, and after writing this book, he isn’t sure what’s left for him to write about.

As the conversation concluded, we moved into a short audience Q&A where Vuong answered questions on identities, shared stories, and Vietnamese community.

Vuong has said he writes at night, almost like an allegory that you start with darkness and arrive at the day. There is a trajectory that queer, refugee stories seemingly follow, so it was powerful and healing to hear a story that refuses to compromise its telling and arrives at joy. 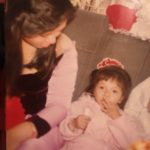 Truc Ho is a recent graduate from the University of Washington, where they majored in Environmental Studies and Comparative History of Ideas. Truc was born in Saigon and raised in Seattle. Their experience with being in between cultures and identities inspired a lot of their research, rooting them in the academic exploration of the structural relationships between history, memory and war, particular in relation to the Vietnam War. Currently, they are planning post-graduation travels, exploring fictional writing, and looking into master programs where they can deep dive into Southeast Asian queer diaspora studies.

In this except of this is for mẹ, Tam Nguyen reflects on a phone call with her mother, exploring how this simple interaction can carry pregnant silences, anchored by words left unsaid, and a love that is textured, ferocious and complex.
Read more
this is for mẹ

To my fourteen-year-old self, Years ago, when we first came to the U.S., remember how Mom used to take you with her to the houses she cleaned? You’d sit in the kitchens of these houses crammed full of wide empty spaces, feet dangling, too scared to touch anything in case you left a mark.
Read more