In this except of this is for mẹ, Caroline Nguyễn Ticarro walks us through the birth story of her family. The story begins with her adoption labor, which stretched countries and continents. She shares personal insights into the moment she birthed herself as a mother, in her motherland, and adopted her twin daughters. 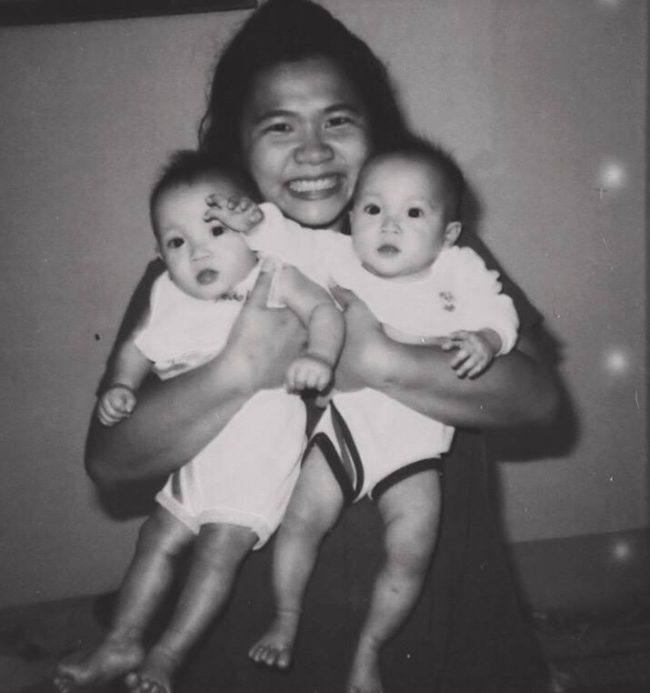 For as long as I can remember, I always loved children. I remember wanting to be a teacher not because I thought I would be a good teacher, but because I would be surrounded by children all day. When I found out I couldn’t get pregnant, I don’t remember being sad, but just determined to start a family whatever it took, and I was only 27.  Now looking back, I probably didn’t look at any other options other than adoption to start a family, and admittedly it was like when I wanted to be a teacher – I never thought I would be a good parent, I just wanted a child.

The decision to adopt from Vietnam was much harder than it should have been. After all it was where I was from. But I only looked at the “numbers” – and there was a better chance of finishing and receiving a child from Korea or China sooner. But at an orientation meeting at the adoption agency I heard about this new program in Vietnam that had just opened, and referrals could happen faster. In the journal I kept during the adoption process I wrote, “This is my birth country, I truly hope to make this visit a pleasant memory for my family – old and new.”

I was more apprehensive of going to Vietnam than becoming a mom. I had no memories of Vietnam from when I was a child. My parents had told me very little of Vietnam as I was growing up, there were no pictures and very little stories. There were many nights I had to be the one to wake up my mom from nightmares she would have about the war. My head was only filled with pictures of what was on TV and the movies and a couple of paragraphs in my school books.

So, during the months of waiting during the adoption process I decided to “be Vietnamese”, or at least learn more about Vietnam than I ever had before. I wanted to learn the language, I only knew basic words and I had tried to forget a lot once I moved out and didn’t “have to” speak it every day. I wanted to know more about the food, more than just my mom’s infamous egg rolls that all my friends wanted, but to actually go to Vietnamese restaurants and try new things and even ask my parents how they made some of my favorites. I definitely wanted to learn more about the culture. I knew that Tết came once a year and we got money in red envelopes, but I had never asked about any other traditions beyond that.

I never read about the Vietnam War though – I continued to block that. The lessons I was trying to teach myself and volunteered to teach other parents waiting to adopt seemed ironic when my whole life prior I was totally ok with being “just American”. I remember going to an “adoption education” all day workshop and hearing real stories from adoptees and their parents about grief, loss, attachment, bonding, and identity, and all I heard was “you’re starting a family.” I was an expert in blocking out things I didn’t want to hear.

I received a call from my social worker on August 31, 1998 with the best news of a referral for twin girls that were born in February. They were small – only about 3 pounds at birth – but if I wanted to accept the referral, they were mine. The excitement and tears came all at once. I was on a crazy rush of adrenaline to prepare everything; suddenly 13 months of waiting was about to end because then I found out I was going to Vietnam 10 weeks later.

On November 8, 1998 – it was the last night of my adoption labor – I held and played with the girls at the orphanage and realized that the next day all my dreams – all my hopes, wishing and waiting would be over. I had a calm come over me that felt so right, I was in my motherland, and I was about to become a mom. I remember saying to myself that no matter what, these girls will be my legacy.

Raising twins seemed easy and hard all at the same time. From the first day I went back to the hotel with them, parenting seemed like a guessing game. There were just fewer choices when they were babies. I was so lucky to have the support of so many family and friends that were nearby to help me. The grandparents would show up every week with enough food to fill the fridge and help entertain them. And I had dear friends that would just let me come over to their house so I could nap while they played with the girls.

I was always the parent that said, why are you using training wheels?  As they got older I leaned on my best friends on how to get through every ‘phase’. I was not shy then or now about saying, “I don’t know, let me ask someone.”

Except for when it came to talk about kids that would make fun of them. I wasn’t hiding behind any rose-colored glasses, I knew that my kids would be teased because we didn’t look like everyone else. I remember how it hurt to be called “chink” every day or that I couldn’t do something because I was “just a girl”. I backed down a lot as a kid, teenager and adult because I didn’t have any confidence in myself.  I had very few role models and was much too naïve.

It wasn’t one “big talk” at a certain age, I just knew that as a mom I would have to prepare them by being a good role model. So, it started when they were toddlers and people would tell me how pretty they were, and I would always respond with “…and smart.” We would read a wide diversity of books about other ethnicities, cultures, and countries. They wrestled, played football with the boys’ team, and were champion weightlifters. They ignore the bullies and know exactly who they are and I love that I was a part of teaching them that.

My experience as an adult daughter would not be the example for my daughters, and I don’t have to go into the details, but I know that if I don’t acknowledge it, then I fail to admit it has a total effect on how I try every day to be a good parent. Parenting is still a guessing game, I’m adjusting to a new life as a single mom. But it’s not as hard as I thought it would be. They are young adults now and I am happy that we talk every day, that I can tell them that I love them, and also be honest with them about my mistakes and successes.

Adoption made us a family. My daughters made me a mom forever; and when we became a family, it was a life changing moment. It was a catalyst – my catalyst. 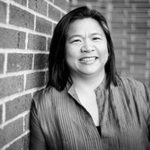 Caroline Nguyễn Ticarro is a prominent figure in the non-profit sector. She balances being a mother, motivational speaker, and director of an international NGO. In 2012, her work and passion were featured in a 3-part series on CNN’s Freedom Project.

Caroline was four years old when her family fled Vietnam on April 29, 1975, along with hundreds of thousands of other Vietnamese. Twenty-three years later to the day, she returned to Vietnam to adopt her twin daughters. It was during that first return trip that Caroline decided she wanted to do something to help.

The desire to help resulted in the founding of Catalyst Foundation in 1999, focused on helping build communities to fight human trafficking. The holistic community development programs center around the child, and the belief that no child is disposable. Catalyst Foundation has a formal commitment with the family to ensure that basic human rights are respected, and that every person has the right to self-dignity. Caroline leads her team to provide the ethnic minority communities with basic human needs: education, safe housing, proper sanitation, medical care, enough food, and water.

In addition, Caroline has coordinated annual humanitarian volunteer expeditions to Vietnam, and led the annual Vietnam Culture Camp in the Midwest and on the East Coast, to celebrate Vietnamese culture to families that have adopted children from Vietnam.

Caroline’s passion and work is tireless.  She travels often to Vietnam to direct the mission and vision of Catalyst Foundation.

THIS IS FOR MẸ: Hometown Flavors

"We had ancestors who were food advisors and cooks for royal families in Central and Southern Vietnam. After the Vietnam War, it was harder to hold onto our treasured recipes. As a first-generation American, I want to ensure our family’s rich history and long-lasting love for Vietnamese food will still be celebrated by generations of Vietnamese people throughout the world."
Read more
this is for mẹ

THIS IS FOR MẸ: Dear Mum

You speak to me in Vietnamese and encourage me to stamp my feet and walk towards you. Are you scared? You ask me. Come on, it’s okay, Ma is here. Ma is here. Thank you for always being there.
Read more
this is for mẹ

In this except of this is for mẹ, Tam Nguyen reflects on a phone call with her mother, exploring how this simple interaction can carry pregnant silences, anchored by words left unsaid, and a love that is textured, ferocious and complex.
Read more