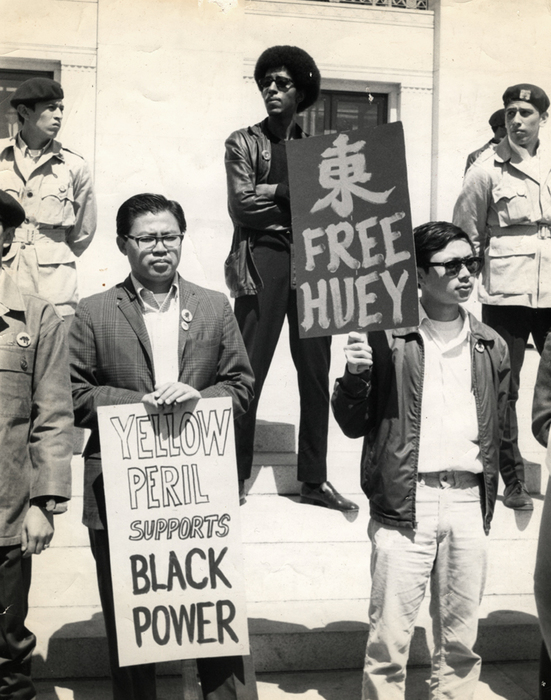 #BlackPowerYellowPeril through the decades up to today

#BlackPowerYellowPeril. Have you seen these words together? What comes to mind? Do you know what it means? The first instance is a photograph in front of the Alameda Courthouse in Oakland, California with Asian-American activists holding a sign that said: Yellow Peril Supports Black Power, at a rally for Huey Newton, a founder of The Black Panther Party in 1966.

The origins of “Yellow Peril” began in 1882 with The Chinese Exclusion Act. Politicians called Asian-Americans this term to make them seem like a danger to white Americans. Asian-Americans reclaimed the term as a moniker to fight for their rights. We can see this in the Cinemax show Warrior. Yellow Peril continued as an organization and its leader, Richard Aoki, became a rightful member of The Black Panther in the sixties. Black Power Yellow Peril has also been used to describe the friendship of Malcolm X and activist Yuri Kochiyama.

There have been rumblings of anti-Blackness in Asian-Americana, with the “model-minority” label being used to bring Asians “white-adjacent” and therefore put down Blackness. Black leaders have called out some Asian-Americans for also co-opting Blackness to propel themselves in entertainment – like the debate surrounding Awkwafina’s “Blaccent”. We’ve had people like Tila Tequila become an outright Nazi by flashing white power signs in photos with racists and donning a SS themed outfit with swaztikas and a gun.

On the flip side, today we have people who clearly carry on the proud tradition of two communities joining together with Black Power Yellow Peril.

We have the BUFU collective which consists of two Black women and two Asian women – Tsige Tafesse, Jazmin Jones, Katherine Tom and Sonia Choi. Their group is born out of #Asians4BlackLives.

There’s Roy Choi in South East Los Angeles working together with Black urban farmers, food access advocates and chefs like Aqeela Sherrills and Olympia Auset to better the food desert situation. The work can be seen in the PBS series Breaking Bread.

With the controversy of Bruce Lee’s portrayal in Once Upon a Time in Hollywood, his friend Kareem Abdul Jabar has written in The Hollywood Reporter about his objection to Quentin Tarantino’s failure. #BlackTwitter and #AsianTwitter have rallied around Shannon Lee’s call out of Tarantino mocking her father and his legacy.

Speaking with Anton Song, a writer based in Toronto of mixed Asian descent, I find out that Black Power Yellow Peril massively inspired his visual poem entitled Malcolm, produced with his long time friend Joan Digba, a Black woman. Anton says, “A key life experience for me was seeing a video of Malcolm X giving his famous speech Who Taught You To Hate Yourself? and understanding for the first time exactly what White Supremacy is and how it is maintained. This was an incredibly significant epiphany for me because until that point in time, I wasn’t really aware of the extent to which this kind of programming had affected me. Not only did African-Americans fight for all people of colour in their struggle for civil rights, but they ignited the spark of racial justice for all of us.”

On a commercial scale, the world is finally getting a major film about a Black woman and an Asian-American man by Gabrielle Union and Chester Tam.

An awesome example of the unity of Black Power Yellow Peril is Olivett Robinson and Charlie Vo of Mantrap Nails! They are featured in Adele Pham’s award winning documentary Nailed It about the history of Vietnamese refugees to the US and the nail industry. Olivett and Charlie joined forces in Inglewood in Los Angeles and paved the way for other women, and are “forever united”. Olivett taught Charlie English on the side and also helped raised her son, Mike Vo. Their multiple decades bond is unshaken. They’re sisters.

Do you have any examples of amazing #BlackPowerYellowPeril in your community or out in the world?

This essay originally appeared on Flaunt. Reprinted with permission by the author.

Thuc Doan Nguyen is a Los Angeles-based writer and producer. She was born in Vietnam, and grew up in North Carolina and Southern Maryland. She is a double major from The University of North Carolina at Chapel Hill in Public Policy Analysis (Environmental Policy) and Communication Studies and also holds a master’s degree (MPA) obtained in Southern California. Nguyen is the founder of “The Bitch Pack”, a group dedicated to promoting female-driven screenplays through Twitter and other social media sites.

Do you enjoy reading diaCRITICS? Then please consider subscribing, donating, following us on Instagram or Twitter, and sharing this post to your social networks. You can also join the conversation by leaving a comment!

I am making a space for reflection with my communities, a space for my family who have been left out of the conversation for way too long, and a space for allies who are willing to burn down capitalism and fight for racial justice equity.
Read more
Essays

To be further useful in movements for Black liberation, we must look into the specific ways we ourselves are functioning under state violence and white supremacy. We can do way better than attempting to organize around a myth.
Read more