In this excerpt of this is for mẹ, Như Tiên Lữ writes to her fourteen year old self, reflecting on the lessons of belonging, fearlessness and courage which she has gathered as she has grown. Alongside Như Tiên, we come to appreciate that the youthful experiences we think are all ours, are often unturned stones that have already paved the paths that our mothers walk, readying the way for us.

To my fourteen-year-old self

To my fourteen-year-old self,

Years ago, when we first came to the U.S., remember how Mom used to take you with her to the houses she cleaned? You’d sit in the kitchens of these houses crammed full of wide empty spaces, feet dangling, too scared to touch anything in case you left a mark. Could she hem these curtains? Could she cook mashed potatoes? Every request received a smiling nod and a yes, yes, no problem. What you don’t know is that she then taught herself how to do those tasks. She sewed and re-sewed the curtains for days. She studied the picture on the recipe card that she couldn’t read and used a drinking glass to smash the boiled potatoes into pieces. She broke down crying after the first house she cleaned because she was sure she would be fired.

Back home, she had been a nurse in Saigon during the war, and the doctors gave her the most difficult shifts because she was so skilled with the patients. That was in the old country, before you were born. She will show you a streaked photo of her at 22 years old, sitting in the grass, legs crossed at the ankles in a white dress uniform, open-mouth laughing.

Remember years ago, when you were still wearing matching colored socks and sweaters, when your English teachers encouraged you to write about the boat journey from Vietnam or the refugee camp? When all you remembered were vintage snapshots: the ocean wind, water, a child’s plastic shoes in the middle of the road. You smiled and nodded – another unwanted trait you’ve inherited – as if you were hearing the suggestion for the first time. But you knew you wouldn’t, you couldn’t, because even then, the fire inside you was burning through your mother’s tongue, your eyes black as longan seeds, through those visible and invisible scars that made you and kept you foreign. Be patient. You will learn how to move through white people’s spaces in a way she cannot, but it will take you years more to learn that’s not the same as belonging.

I know you are convinced you are going to be so different from Mom. Brave, unafraid of traveling, of new people and places, of being alone. You will defy her and attend college 3000 miles from home. Then further still after you graduate, running from frigid states to hot countries and back again. Be careful, she will tell you fearfully, conjuring up murderers, accidents, disasters. No one can be trusted, nothing is safe. You will laugh at how small her world is. Be kind. In time you will realize she’s already traveled that path you’re seeking: flight from home, strange countries, foreign languages, except she fled with your tiny hand in hers and the constant chase of hunger, separation, death. It is from you that she learned how to be afraid, what it means to hold onto something she cannot survive losing. It is from her that you will learn how fearlessness is not the same as courage. 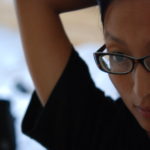 Born into the year of the roaming horse, Như Tiên has lived in three countries and seven states thus far. Being a new mother has temporarily stilled her restlessness, although she expects that will not last. She has worked over the last couple of decades in various social justice and arts nonprofits, and believes that our stories can and will change the world. She earned an MFA in Creative Writing from the University of Michigan and an MA in Social Documentation from UC Santa Cruz. She has no social media presence but would still love for you to follow her writing.

In this except of this is for mẹ, Tam Nguyen reflects on a phone call with her mother, exploring how this simple interaction can carry pregnant silences, anchored by words left unsaid, and a love that is textured, ferocious and complex.
Read more
this is for mẹ

While switching between my identities as Loan the Vietnamese refugee and Kim the American professional has sometimes been an emotionally draining, isolating experience, I have grown to become creative, resourceful, resilient, and empathetic as a result of navigating the in-between.
Read more
Essays