As a follower of all narratives ARVN (“Army of the Republic of Việt Nam”), the English translation of the joint memoir of war correspondents, Vũ Thanh Thủy and Dương Phục, with sections penned by their daughter, An Dương, Surviving the Vietnam War and Its Aftermath, is the single most anticipated ARVN memoir since Major Nguyễn Công Luận’s Nationalist in the Việt Nam Wars. Vũ and Dương’s sweeping memoir unveils to the English-language reader a three pronged journey that would otherwise be held in mystery: the work of Vietnamese war correspondents during the Việt Nam War, the experience of South Vietnamese citizens, particularly women, imprisoned in Communist “re-education” camps, and the agonizing captivity of refugees held as hostages by Thai pirates. 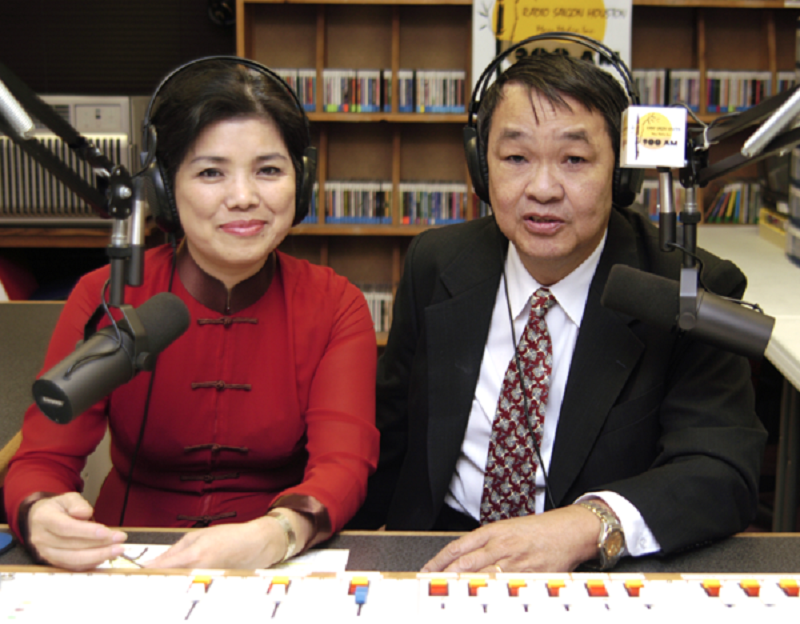 Vũ and Dương’s memoir appeases the longing experienced by diasporic children plagued with a two-part curse: the slow and steady degradation of our linguistics abilities coupled with aging and eternally silent elders and their carefully guarded pasts. Surviving provides a brave and honest lens into a past with all of its triumph and all of its ugliness that we can both read and connect to. Surviving gives us license to speak and share without fear.

As a “Memoir on Love and Terror,” Surviving is an elegant back and forth narration by Vũ and Dương of finding one another, falling in love, and raising a child as the country spirals into Communist rule. Their love story is captured in simple gestures reflective of the war such as the hand-made comb that Dương fashions for Vũ out of mortar shells. 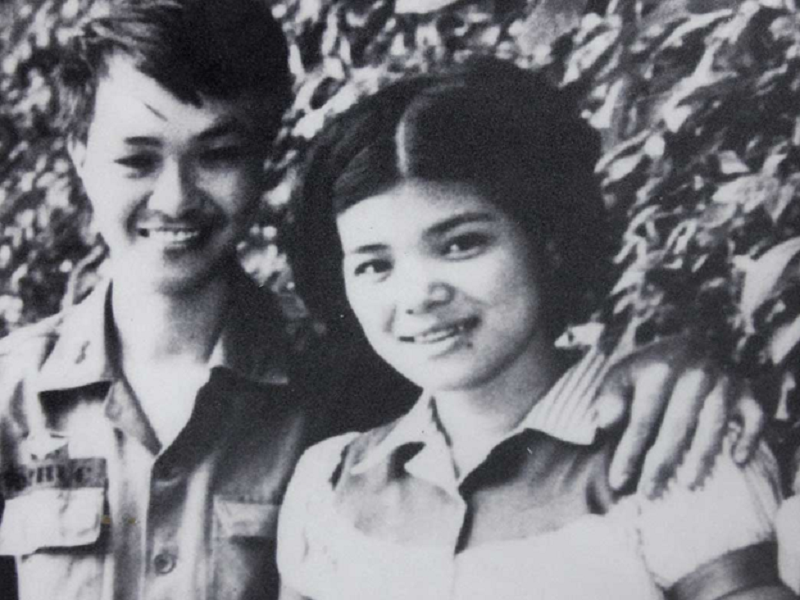 Their romance is also marked by bittersweet episodes of separation such as their own risky assignments reporting at the frontlines and Dương’s imprisonment in a Communist “re-education” camp. The latter tested Vũ’s cunning when she is forced to devise undetectable ways to communicate with Dương like scrawling messages on onion paper rolled into cigarettes. The most challenging time is after Dương’s escape from prison where he could only see his wife and daughter under carefully arranged situations which including masquerading as “Uncle” to his own daughter.

The romance in Surviving is not limited to the time-tested bond between these two war correspondents but also their tumultuous love affair, defined by unrequited love and betrayal, with the promise of South Việt Nam or, at the very least, the evolution of the Vietnamese people (inclusive of South Vietnamese citizens) despite Communist rule. Though they attempted to flee after the Fall of Sài Gòn, Dương has an irresistible pull to remain in Việt Nam to witness history first-hand. With this sentiment and a shoe-string of optimism, Dương is hopeful that the country would survive and the people still thrive despite Communism.

Their attempted escape from Việt Nam fails when their newborn daughter becomes feverish and dehydrated while on a fishing boat crammed with 38 other passengers. With no sign of rescue, they abandon their attempt to escape and return to a newly minted Communist Việt Nam. Within seconds of returning to Sài Gòn, however, Vũ and Dương both see how swiftly the Communists had transformed the country: “ [i]n the few days that we were away, they had seized the entire South, turning it from a free country into a land of repression.”

Roaming the streets of Sài Gòn on April 30th, Dương, a Lieutenant in the Psywar Department and newsroom Chief for Voices of the Armed Forces Radio, feels “immense shame” at seeing the army uniforms of fellow ARVN litter the grounds. These feelings are doubled when he, too, is forced to remove his own uniform for fear of being killed on sight by Communist patrols. The act of removing his uniform and hiding it inside a bush struck a chord, “I felt that by this action I was burying my whole life, consigning to the grave the very core of my military self, the foundation of my adult life.”

The family’s torment intensified when Dương is later imprisoned in a Communist “re-education” camp. It would take them several years of failed attempts before they would encounter the most terrifying challenge of their lives—surviving a hostage situation with Thai pirates on Kra Island in the Gulf of Thailand 180 miles south of Bangkok. There they, along with 78 other boat people, spend a torturous 21 days where they are subject to violence and rape by Thai pirates until their rescue by UN Official, Theodore Schweitzer III.

A Celebration and Honoring of ARVN

Scattered like gems throughout the memoir are vignettes of South Việt Nam’s heroes—ARVN soldiers and leaders that Vũ and Dương had the privilege of working with. It was a thrill to read these rare snippets of intimate stories. Cameos of four of the five famous ARVN Generals who took their lives at the Fall appear in the memoir along with other notable ARVN:

Surviving is, above all else, a love letter that professes a commitment to the very tenets of journalism: to report the truth no matter how ugly. Through the memoir, we are able to see the place that the Vietnamese media played in war reporting by Vietnamese about Vietnamese in a war heavily dominated and shaped by the American media at a time when radio broadcasting in Việt Nam was still in its infancy. During assignments, Dương, for example, had a heavy portable open-reel magnetic-tape audio recorder on his chest while a parachute occupied his back.

In reporting the truth, the authors state:

“Sometimes the truth surpasses anything in the human imagination. We truthfully present everything—episodes of stark, unbearable terror along with strange, unbelievable turns of fortune; the worst of human flaws as well as acts of kindness suddenly performed by the most despicable of people—to balance fairly the good and the bad that can be found in human beings.”

For their story, the bad included the deaths of soldiers and war correspondents, a sea of corpses on the Highway of Terror, a child separated from her family in a devastated hamlet, the naiveté of the American media in their flawed coverage of the war, a father separated by his daughter during her infant years, surviving and escaping Communist “re-education” camps, and threading the South China Sea as boat people.

The good can be found in every colleague, friend, and family that stepped up to shelter the family and Dương after he escaped a re-education camp, the soldiers and military commanders that sacrificed their lives for South Vietnam, the colleagues and fellow war correspondents that risked their lives to bring the truth of the war to the world, Vũ’s parents who supported the family from the U.S., and the UN official who risked life to rescue them.

Vũ started her career as a translator for an astrological column for Tin Dien (The Chronicle), a daily paper in Sài Gòn, that eventually hired her as a reporter. Her first major assignment was to cover the discovery in 1969 of a mass grave from the massacre in Huế during the 1968 Tet Offensive. Witnessing the bodies of civilians, she was horrified at the cruelty of the Communists. She remarks that in writing the article for that report, she “was overwhelmed by intense passion…I knew that after that assignment, my life would never be the same.” She went on to report directly from the Cambodian frontlines and was the youngest woman to have ever been awarded the Silver Star for Valor, a medal usually reserved for fighting men who had shown exceptional bravery. She eventually joined the Voice of Freedom radio station which was directed by Lieutenant Colonel Vũ Quang who would later establish Little Sài Gòn Radio in Orange County, California, the first Vietnamese broadcasting station in the United States.

Dương, a nomad and an adventurer at heart, was hired as a reporter at Radio Sài Gòn where he and his fellow colleagues, Vu Anh and Le Phu Nhuan, became the first civilian journalists to earn Airborne certifications as paratroopers. With the ability to jump out of airplanes and helicopters, Dương excelled as a war reporter often accompanying Airborne troops to the frontlines. At the front, he would record his instantaneous observations while capturing the sound of gunfire and explosions in the background. Listeners loved the fact that he interviewed frontline soldiers. Of his love for his work, Dương notes that his desire to report “ran through my blood with such intensity that I felt my life dull and meaningless when I was not on assignment.”

Their career choice was not without casualties. Warriors of truth and information, Vũ and Dương also pay homage to journalists, war correspondents, and photographers who risked their lives to bring the stories of ARVN back to people they fought so hard to defend.

Surviving is, at its heart, an act, in and of itself, of war correspondence—reporting the truth and complexity of the authors’ experiences. Just because a war has been won or lost, does not mean it has ended. As Surviving testifies, a war’s aftereffects live on for generations.

Surviving the Vietnam War and Its Aftermath: War Correspondents’ Memoir of Love & Terror
by Dương Phục & Vũ Thanh Thủy and An Dương, translated by James Banerian
$29.99

Z.M. Quỳnh is currently working on a novel that highlights the experiences of ARVN soldiers. You can visit her at zmquynh.com.