As part of a mostly younger, more socially conscious community of Asian Americans, it is easy for me to recognize and agree that centering Black voices during this time is vital and more urgent than reiterating Asians who support and defend Black lives exist. Being mindful of both critiques can look like carrying a “Black Lives Matter” sign at protests instead of an “Asians for Black Lives” one. After all, passing the mic is an action that involves being present but not centered.

However, I also understand that for some Asian Pacific Islander Desi Americans (APIDA) who are newer to conversations around race, letting go of the identifier can be difficult when you’ve just found it.

As more and more APIDAs are beginning to talk to their communities about the protests and the BLM movement, it becomes clear that Asian Americans’ perceived lack of participation and support around #BlackLivesMatter is not the same as white silence. It is and has been, at least in one big aspect, a lack of accessibility.

To be Asian American and also say “Hey other Asian Americans, why aren’t you speaking up about BLM?” assumes 1) those of us who have been harmed by state violence don’t exist and 2) immigrant communities—especially those that are newer or have fewer resources—readily have the tools to engage in the rhetoric of racial justice.

Neither of those are true. It’s in the literature, and it’s in our lived experience- whether anyone realizes it or not.

While I think it is obvious that more can be done everywhere, I don’t believe we’re going to get Kevin Nguyen to move towards Black liberation or collective liberation by assuming he has real entry points into his own history or relationship with state violence or racism. The guy isn’t even aware that the one time the police raised a gun at his dad who didn’t speak English was an act of violence or structural racism. (Anecdote based on real responses from APIs4BlackLives Minnesota when they surveyed APIs.)

In 2016 and now again in 2020, I’ve seen Asian Americans trying to rally other Asian Americans in a rightfully frustrated way, but in a way that fails to understand why things are the way they are for APIDAs. Some of the language and the framing around mobilizing APIDAs is unproductive, and further perpetuates the notion of adjacency to whiteness when that’s incredibly unfair and inaccurate. We are not Black, but we will never—in any possible reality—ever be white.

In order to better understand Asian Americans’ roles in dismantling anti-Blackness, we must also understand the conditional nature of our safety and belonging under white supremacy. For example, when we look at Southeast Asian American and Pacific Islander populations, we find that there is a school-to-prison-to-deportation pipeline and disproportionate rates of incarceration that exist in these communities (though the data is always behind what lived experience knows first).

On a larger scale, if someone were to decide tomorrow that Asian Americans were dangerous, the violence we experience would switch from subtle to overt in an instant. The pandemic has revealed as much.

Refusing to acknowledge these points of nuance (as well as many others left undiscussed) benefits no one, and can easily fall into such trappings as the belief that Asian Americans can wield white people’s invincibility in the face of state or racial violence. We cannot.

Thus, to be further useful in movements for Black liberation, we must look into the specific ways we ourselves are functioning under state violence and white supremacy. We can do way better than attempting to organize around a myth.

In regards to today’s landscape for Asian American activism, using rhetoric made for educating white people in an attempt to educate or mobilize APIDAs and Asians in America (think: parents & grandparents) is not going to work. It can’t. It assumes power not all of us have, if any. It assumes voluntary complicity where there is involuntary lack of accessibility, comprehension, context, or tools. It assumes silence as stemming from a lack of care and not a lack of language.

The question of “Where are the Asian Americans in all of this?” is a particularly complex and painful one because it simultaneously expresses an inability to find many other APIDAs in our circles who audibly or visibly care about Black communities while also conjuring and perpetuating a history of harmful stereotypes that APIDAs don’t participate when willing and able.

But just because you can’t see or hear a community, it doesn’t necessarily mean they’re not there- especially at a time when it’s vital that another be uplifted.

If observing my own community during this historic moment has taught me anything, it’s that it’s time for a new narrative. More and more APIDAs are becoming engaged. We’re creating tools and language, and we’re doing it intergenerationally. Two weeks ago, I heard echoes of a sentiment that’s been reverberating since 2016 and no doubt long before: I cannot find the others. Today, I think it’s evident we’ve already begun to. My hope is that we continue this work so that one day soon the questions and answers do not revolve as much around things like “where are you?” or “here I am” but rather an ever-expanding, “What are we doing next?” 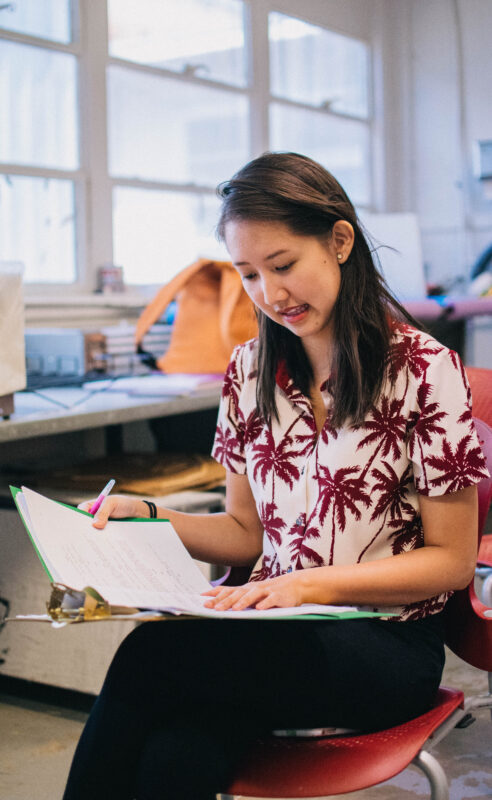 Born in Saigon and raised in Boston and Houston, Thanh Bui is a writer & actor currently based out of Austin, Texas. Her work has appeared in The Offing, Cosmonauts Avenue, Glass: A Journal of Poetry, FIVE:2:ONE, Crab Fat Magazine, FreezeRay Poetry, The Sunlight Press, and other places accessible to her mom. She loves constantly.

Photos are courtesy of Cindy Trinh, who was featured in an artist profile. These photos are part of her ongoing project to document protests movements in New York City, you can see more at instagram.com/activistnyc.

I am making a space for reflection with my communities, a space for my family who have been left out of the conversation for way too long, and a space for allies who are willing to burn down capitalism and fight for racial justice equity.
Read more
Essays

The protest is on 38th and Chicago, at the site where a white cop murdered a black man, George Floyd. I am very familiar with this intersection: I grew up not far away, in Phillips, and currently live even closer.
Read more