Reviews of A History of the Vietnamese & Sources of Vietnamese Tradition 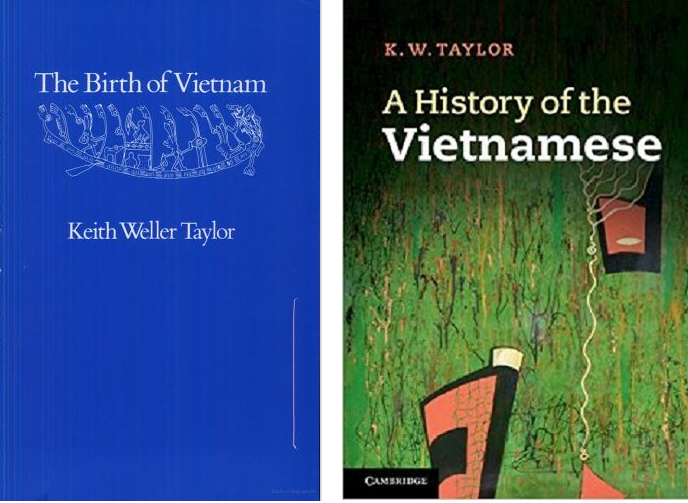 Keith Taylor’s monumental The Birth of Vietnam came out in 1983.  Richly sourced and painstakingly detailed, it remains an informative work for specialists of Vietnamese history. Since then, Taylor helped to train a new generation of historians of Vietnam at Cornell University, edited several volumes, and published a few articles, including a conceptually significant one in the Journal of Asian Studies.  Still, it was an article rather than a book. Well, the answer to “what is Keith Taylor up to?” is found in the publication of A History of the Vietnamese.  To say the new tome is well worth the wait is barely an exaggeration.  For one, the time in between books allowed the author to engage more recent research and rethink some crucial issues.  For another, the book is a comprehensive history rather than a monograph – and general histories may look deceptively easier to write but are in fact a lot harder to do well.

Published by a prestigious academic press and at over 600 pages of text alone, this history is not only well done but also hefty in more than one meaning.  Yet it is appropriately geared towards the educated but non-specialized audience: the intended readers of this review.  The book has neither endnotes nor jargon, and shows instead clear prose, sharp organization, and a number of helpful maps, tables, and charts.  Its emphasis on politics and elites may have somewhat limited the scope, and it is not a big stretch to call the book A Political History of the Vietnamese.  Still, the emphasis offers thematic unity and makes the narrative less taxing to follow.  The content is organized in thirteen chapters, and the first chapter is devoted to the first millennium.  The next eight focus variously on the major dynasties – the Lý, Trần, Lê, and Nguyễn – plus growing regionalization, contacts with other Asians and Westerners, and lengthy warfare among the Vietnamese.  The last four chapters cover the arrival and rule of French colonialism, warfare since 1945, and the postwar era.  Taylor ends with a short Retrospective, which opens by concluding ironically that “no conclusion can be drawn in the sense of discovering some deep logic governing a presumed destiny of the Vietnamese people” (p. 620).

Given the size and many unfamiliar names of persons and places, it is tempting for readers interested in the twentieth century to pick up this book and go straight to the last two or three chapters.  The temptation is understandable.  Nonetheless, this reviewer recommends that they begin with the seven-page Retrospective and the first chapter before roaming the rest of the book at their pleasure.  At the least, they will be introduced to three major themes in the retrospective section, plus an elaboration of the first theme in the first chapter, possibly the most important chapter of the book.  (Of course, it is best if they can read all remaining chapters in chronological order.)

From the first chapter, specialists may note that Taylor has modified some positions in The Birth of Vietnam. For the casual readers, this chapter establishes the intertwined and intimate relationship between China and provincial Vietnam.  It challenges and demolishes long-standing assumptions about Vietnamese history, especially the notion that there had been a separate Vietnamese identity early on.  It barely names, for instance, the Trưng Sisters and Lady Triệu: a sharp contrast to Vietnamese nationalist histories that elevated and celebrated them as anti-foreign and proto-nationalist heroines.  Having grounded his argument in an abundance of details and developments, Taylor offers the following conclusion:

Every aspect of Vietnamese culture is deeply imprinted by contact with China. To assume that these aspects have been either imposed by imperial oppressors or freely borrowed by indigenous people requires a clear demarcation between what is called Chinese and what is called Vietnamese.  Such a demarcation did not exist during the [first millennium]. In the tenth century, the people of what is now northern Vietnam were an amalgam of settlers from the north and indigenous peoples; for centuries they had lived together, intermarried, developed bilingual habits of speech, and formed a regional perspective on imperial civilization (p. 50).

Two other themes emerge after the first chapter, and one has to do with Vietnamese relations with non-Sinitic peoples.  Having interacted with the upland minorities and the Chams for centuries, the Vietnamese came into contact with the Khmers, the Siamese, and Europeans by the seventeenth century.  These relationships followed different dynamics and turned complicated in different ways.  But they were different from the relationship with China: a factor that ironically reinforced the tendency to imitate the Chinese model, at least among northerners.  Which leads to the other theme:  regionalization and divergence between the north and the south.  Proximity and interaction to China consolidated the regional identity of many elite Vietnamese.  But as some moved southward – an episodic and unpredictable process – a new regional identity developed alongside inter-regional conflict.  Not only did the Vietnamese fight other Asian peoples (and, later, Westerners), they also disagreed and fought among themselves.  In Taylor’s interpretation, it is not too far to say that conflict and infighting characterize Vietnamese history, especially during the early modern era and of course in the post-colonial period.  It is not an accident that the longest chapters concern the Trịnh-Nguyễn conflict in the seventeenth century and the Vietnam War in the twentieth.  By tracing regional division and intra-Vietnamese conflict into the far past, the book sheds light on the ferocity of the twentieth century.

A History of the Vietnamese is long but not boring, and should delight especially fans of political history.  It offers, among other goodies, a number of vignettes about Vietnamese political figures that ranged from the respected to the bizarre.  There is, for instance, the neo-Confucianist Le Tu Thanh, better known in Vietnam as King Lê Thánh Tôn, who walked a fine line in treating his morally suspect former teacher.  Taylor notes succinctly that this teacher’s “dismal career introduces three large aspects of Le Tu Thanh’s reign: the importance of education, an intense relationship between the king and his officials, and an unprecedented renovation in the structure of government” (p. 206).  On the opposite end of the spectrum is the last ruler of the Early Le:  Le Dinh in the book and Lê Ngọa Triều in common usage in Vietnam.  His excesses included perpetual intoxication, roasting and drowning prisoners, and humiliating court officials by feeding them felines and lizards:  a prototype of sorts to Kim Jong-il and Kim Jong-un?  Taylor’s judgment on this cruel ruler is as insightful as it is swift: “The speed with which he dissipated his youthful vigor may indicate that the stereotype of a dynasty’s last bad king may in this case not entirely amiss” (p. 58).  These examples illustrate Vietnamese continuous engagement with the Sinic civilization well after the first millennium: views on education and dynastic change, respectively.  There are many similar examples that help to ease the wheel of narrative about changes and developments among this most fascinating people.

A History of the Vietnamese emphasizes political, military, and diplomatic history; it is necessarily weaker on other kinds of history, especially in the first ten chapters. For sure, there are portions about economy such as the growing monetized market under the rule of Nguyen Phuc Khoat, the “first southern king.”  There are segments about society in the likes of peasant unrest during the fourteenth century, or about literary culture such as the life of the poet Hồ Xuân Hương and the epic The Tale of Kieu by the mandarin Nguyễn Du in the early nineteenth century.  By and large, however, elites and rulers rule the narrative.  Even most other historical aspects are interpreted in relation to ruling parties and elite figures. 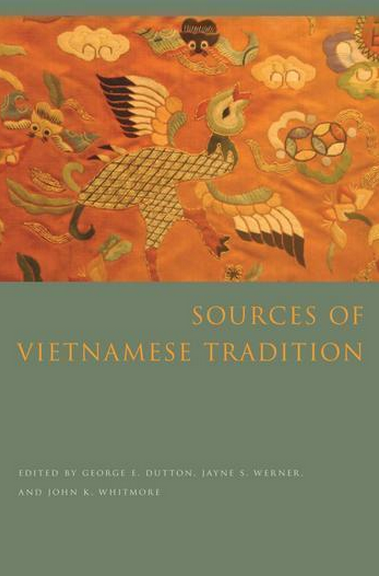 This is not a complaint as much as an affirmation that the writing of Vietnamese history remains a fallow field.  In the meantime, we should be grateful for Sources of Vietnamese Tradition, a compilation of primary sources for the Introduction to Asian Civilizations series from Columbia University Press, edited by George E. Dutton, Jayne S. Werner, and John K. Whitmore.  Because of its genre, this book may not draw as much interest from the casual readers as Keith Taylor’s book.  Nonetheless, it is accessible enough to have on one’s bookshelves for consultation and occasional browsing.

In some ways, Sources is a most appropriate companion to A History. Like Taylor, the editors opt for an emphasis on elite culture.  There is a great deal about politics and political thought at the expense of literature.  Sinic influence is underscored by a small but healthy opening chapter on the “period of northern empire,” which is equivalent to Taylor’s first chapter on the “provincial era.”  Subsequent chapters mirror well the remaining organization of Taylor’s book.  As seen below, the two books could be read in conjunction with one another.  Each chapter is further divided into convenient categories such as “Governance” and “Philosophy and Religion.”  The anthology contains footnotes, but the editors make a good effort at minimizing them.  Following common practice, each selection begins with a brief explanation on background or context.  The lack of subtitles in both books suggests a desire for authoritativeness.  Both avoid diacritic marks in the spelling of Vietnamese names and make it somewhat easier for non-Vietnamese readers to follow names and text alike.

Anthology editing is a thankless job, and it is rare that first editions such as this one are received without substantial quarrel or criticism from specialists and translators.[1]  Nonetheless, one should recognize and laud the efforts to select from previous translations and to translate into English many new selections.  These translations provide elucidation, confirmation, and even complications to Taylor’s narrative.  Having read about Hồ Xuân Hương and Nguyễn Du in A History, for example, one can read samplings of their works in Sources.  Conversely, one may note that Sources are more attentive to the cult of the Trưng Sisters than A History because there are three selections about them.

Moreover, at least some of the selections demonstrate an attempt to stretch categorical boundaries within the confines of mostly elite sources.  There is, for instance, a nugget about a Lý conquerer who ordered the transcription of Cham music “so that the Vietnamese musicians could perform it” (p. 83).  Or, there is a delightful anecdote of a late Lê court seeking assistance from Buddhist monks to pray for rain amidst a drought, after which it “released twenty-four suspected and difficult prisoners” (p. 106).  Or, there is a longer selection, translated by one of the editors and concerning the training of physicians from Lê Hữu Trác, that includes the following instruction: “When families ask you to examine ill members… you must not consider their wealth or status or their poverty or humble rank” (p. 232).  Behind these selections lie a usable past that awaits discovery by the educated if casual readers.  They should not be intimidated or turned off by the book’s academic imprints or contents of primary sources.  Like Keith Taylor’s narrative history, Sources of Vietnamese Tradition is accessible for reading in all seasons, including summertime: if not at the beach then certainly in the backyard.

A History of the Vietnamese can be bought here.

Sources of Vietnamese Tradition can be bought here.

Tuan Hoang is a visiting assistant professor at Pepperdine University, and teaches in the Great Books and history programs.  His interests include twentieth-century Vietnamese history and the history of Vietnamese refugees and immigrants in the U.S.

Book Review: The Chosen and the Beautiful