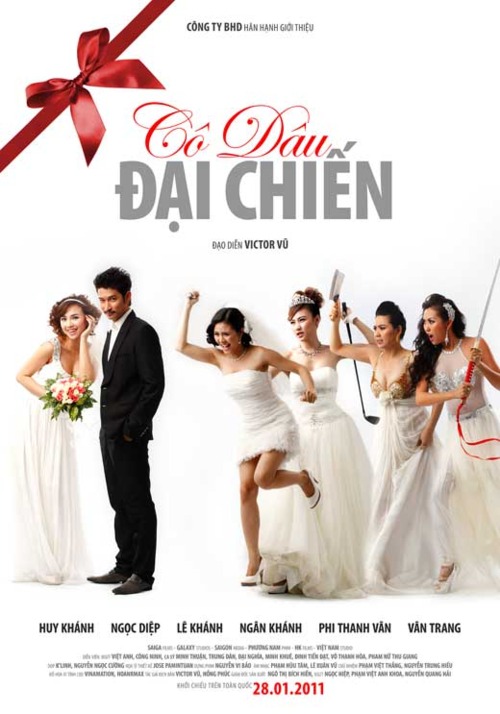 Note: The follow review contains several spoilers about the plot of the film.

Wealthy playboy Thái (Huy Khánh) has finally found the love of his life. Unfortunately he’s also dating four other women at the time, and none of them know about each other. Through a series of “wacky” misunderstanding, he somehow manages to propose to every single one of them on the same day. Will he be able to get himself out of this one and marry his true love? More importantly, will anyone care?

Cô Dâu Đại Chiến is not a good film, not even close. Everything in this movie is over the top to the point of being cartoony, and all the “laughs” so forced and belabored that it feels like the film was made by a bunch of 10 years old giggling behind the camera the whole time. It’s pretty clear that director Victor Vũ (he also shares a co-screenwriting credit with Hồng Phúc) is doing this one on autopilot. His direction knows no restraints. All the actors chew through the scenery like they haven’t been fed in weeks; every line delivery and facial expression is exaggerated to the point of absurdity. A character can’t just look worried, he has to look WORRIED, and if somehow you didn’t manage to get it, there’ll be some kind of CG onscreen graphic, musical cue or cartoon sound effects to make sure that you do; there’s zero subtlety involved. The jokes mostly consist of slapsticks, “funny” sound effects, sight gags, characters mugging for the camera etc., and most of the time they fall flat. It feels like the filmmakers are just desperately throwing anything they can come up with at the screen and hoping that something sticks. Even serious moments in the film are marred by the comically overdramatic performances. A basic rule of comedy is if you’re going with an over-the-top approach, there has to be at least one “normal” character to contrast the    craziness. In this film everyone is so insanely off-the-wall that the audience quickly becomes numb to the endless series of gags. Simply having people “act” funny isn’t the same thing as “being” funny.

It was very frustrating watching this film because I knew that director Victor Vũ had already covered this material before, and much better, in his far superior film Chuyện Tình Xa Xứ (Passport to Love, 2009). That film has a similar subplot: A hard-partying playboy finds the love of his life and has to change his way. Except where Passport to Love‘s protagonist is always likeable despite his two-timing ways, Cô Dâu Đại Chiến’s Thái is a smarmy, fast taking A-hole who would barely be believable as a used car salesman, let alone a “modern day Don Juan” like the film tells us. Everything about this guy is annoying, from the porn mustache to the way he keeps turning to the camera to tell us his thoughts about relationship and how he likes his women (“good looking, smells good, and good looking”). 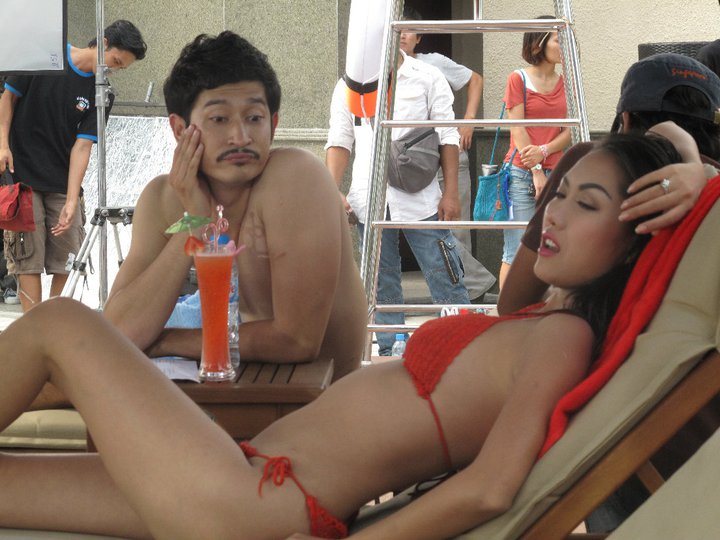 Would you sleep with this man? If the answer is yes, how much is he paying you?

Aside from the fact that he’s rich, it’s extremely hard to see how all these these girls could possibly fall head-over-heels for him. As a character, Thái is thinly written and he exhibits no growth at all throughout the film. He wants to be in a loving and stable relationship, yet the values that he looks for are shallow and superficial (Is she attractive? Is she willing to stay home to cook and clean for me? Is she ok with me continuing to see other women even after we get married?). Not once in the film does he express concern for someone else beside himself and he never stops to ask whether it’s him who needs to change. Instead he judges women by how their values fit into his life. The “winner” is the one who cramps his style the least.

It doesn’t help that the film presents the girls he dates as psychopaths with serious emotional issues, and it’s pretty much impossible to tell them apart aside from their job description. Phương, the airline attendant, is desperate for a relationship after a string of failed boyfriends. Quyên, the chef, is a control freak. Mai Châu, the doctor, is a party girl; and Trang, the actress, is a gold digger. Even Linh, the girl he falls in love with (spoiler alert!), is revealed to be an obsessed woman who has been stalking Thái for TEN YEARS in order to get revenge after he dumped her back in high school. I do give the film credit for that unexpected ending, if only because the character finally gets his comeuppance, but the twist comes out of nowhere in the last 5 minutes of the film and is never even hinted at throughout the previous proceedings. This leads me to believe that even the filmmakers realized  that there’s no way to rehabilitate a character this badly written, and so they decided to just go M. Night Shyamalan on us and do something completely nonsensical to end the film on.

Although shot on a RED One camera, Cô Dâu Đại Chiến simply doesn’t look that good. Most indoor scenes were shot flat with very minimal lighting and outdoor scenes suffer from overcast conditions. Granted, a $500,000 budget is not a lot of money and the weather in Vietnam is often not conductive to outdoor shooting, but not much attention seems to have been given to the look of the film. Shot choices and staging are unimaginative at best, although some crane and dolly shots do provide some variety. The end result looks more like a high budget television drama than a feature film. To be honest I wouldn’t have cared less what the film looks like if the content had been compelling, but the fact that it’s not simply draws attention to the flaws of the cinematography.

The film features numerous CG sequences, and these are of similarly poor quality. In the opening scene the camera tracks a knife as it’s being throw, and it’s immediately obvious when the knife changes from a prop into a fake looking CG counterpart, then back to the prop again. I’m of the opinion that if you can’t afford good CG, don’t use them at all or use them very sparingly. This film uses them all the time and not in a very subtle manner, which often serves to pull the audience out of the film.

The music is a mix of instrumental tracks and Vietnamese songs, and they’re fine if unmemorable. The film appear to not have been dubbed, and the soundtrack is clear, which is nice.

I can’t recall another film where I’ve felt so openly hostile to every single character on screen, even our supposed protagonist. There is just really no attempt to humanize any of the characters; they’re presented as stereotypes and they stay that way throughout the film. Yet for the story to work we’re expected to feel sympathy for them. This film feels very much like a throwaway production that has been rushed through the door as quickly as possible in order to make a quick buck (and it seemed to have worked, because this film took in more than $1.4 million at the box office, about 3 times its budget). While I’m glad that everyone involved made money, I feel that in order for Vietnamese cinema to evolve and stand on its own, we have to start seeing more sophisticated films than this. The industry has to move away from focusing purely on sex appeal and juvenile humor at the expense of a compelling story and multifaceted characters. Here’s to hoping that the audience will start voting with their wallet, and force all Vietnamese filmmakers to elevate their game.

A Bay Area native, Huy discovered his love for filmmaking in high school but did not decide to pursue it as a career until he entered college. While earning a degree in Chemical Biology at the University of California at Berkeley, he studied cinematography on the side and spent the next four years practicing his craft. After college he continues to pursue filmmaking and hope to one day make it a full time career. To date his films have screened at several film festivals in the U.S and in Vietnam including the Vietnamese International Film Festival, the San Diego Asian Film Festival, and the Yxine Film Festival, earning several awards including Best Director and Best Cinematography. You can find out more about his work at www.hiddendreammedia.com.