The following memoir essay is by Hoangmai Pham, who escaped from Saigon to the U.S. with her family in 1975, at age seven. Keeper of Stories is a work-in-progress that interweaves her family’s history in Vietnam and America, and her own psychological journey surviving and understanding that history. Only recently has Mai learned that her strategy for coping with her traumas was what is referred to as a dissociative disorder, in which she compartmentalized pieces of her personality to keep them safe. The memoir traces how she unearthed her family’s history, and explains how that helped her integrate her different parts. On her blog, you can find preceding chapters about her naming and how her self-exploration began. She posts drafts of chapterlets for readers to comment on. Go here for the chapterlet preceding this.

Blue told me that most people experience a singular life stream, a narrative that may skid forwards and backwards, but generally hews to one line with a beginning, a middle, and an end. The sections are connected and even if a few hours, days, or months get skipped or are faded, there at least aren’t skeins of film shaved off the top and bottom, coiling off on their own, discarded on the floor. It’s just one long story. That was in response to my request for him to give me a few bread crumbs, something to lead me back to normal.

What I kept of my last day in Vietnam was this. I come back to our house at midday from school, to change into my house clothes, eat lunch and nap. In the early afternoon, I run out the front door at the high-pitched trill of my father’s Vespa. But he doesn’t cut the engine or dismount. Instead, my mother gets on her motorcycle and the two of them ride off, turning in different directions at the end of the block. Our housekeeper brushes me back into the house.

By late afternoon, both parents had returned. We children change back into street clothes. Someone – was it my father – drives us and suitcases in the worn red sedan to a waiting bus. All my mother’s siblings are there with their children and my grandmother, but not my father’s relatives. The bus rolls down avenues clogged with rush hour traffic, toward the airfield. On the edge of the city, the brakes hiss and it comes to a slow stop. A South Vietnamese soldier is just outside, a rifle across his chest. I feel the adults on the bus simultaneously tense their backs and relax the muscles in their faces. The soldier waves the driver through, and the bus jolts and accelerates again.

We sleep overnight in tents. In the early morning, we are in the hull of an olive colored cargo plane, small bodies and luggage filling the belly of a mother shark. I don’t know what flag it has painted on it. I am the only one standing; the others make a lumpy carpet around me. A man wheels away the short steel staircase and the hatch begins to close. I feel my grandmother gently tugging me to the floor, folding one arm around my waist. The engine’s hum vibrates across my skull as I watch the orange of Saigon’s dawn narrow slowly from the vertically oblong rectangle of the doorway, to a horizontal rectangle, to a slit, and then blinks to black. I fall asleep.

Less than a normal sleep cycle later, we disembark in a place that is hot but dry. There are no trees, and the ground is unpaved. In the dust, families and sub-families sort themselves and their piles of valises and duffel bags into little clumps. There are hundreds of people and I track my parents by their trouser legs. There is a steady hum of voices but no shouting, no laughing. My parents take turns standing in line. There are many lines in succession that end at long foldable tables where men in uniforms sit with piles of folders. They are light skinned and have wrist watches with large faces. By the end of that day or the next, we have an assigned tent. It is large and olive, like the cargo plane, without walls. Underneath there are a couple dozen cots laid in a parquet pattern. I sit on one near my parents’ luggage and wonder why our tent is filled with strangers and not my aunts and uncles and cousins. The blankets they give us are gray and thick and scratchy. Warm cross winds blow through the tent.

My relatives are not far away in other tents. They tell my parents what numbers they have, my parents whisper theirs back. One aunt says she can make her telephone call tomorrow. They share sightings of co-workers and neighbors. There are bags of fruit and cans of food, which do not taste bad. I go by myself to my uncle’s tent and find their cluster of cots. I sit on one and reach for a cracker in an open box, then get up again because my aunt does not look friendly. I think she doesn’t want me sitting on their cots. I retreat to look for my brothers but can’t find them quickly.

Within a few days we land in a different place. Here there are thousands of Vietnamese and the sky seems bigger, much farther away. It is also hot and dry. Instead of tents, there are rows and rows of wooden barracks, one room each, raised on stilts so that the floor hits at the level of my neck. There are a few communal buildings. One is a mess hall, where two long lines snake three times a day. The food here is prepared hot and not in cans. No one notices when I sneak back into line for second helpings of powdered scrambled eggs. I take a new tray and the food servers don’t recognize me. I have never seen scrambled eggs before; they are comfortingly mushy and have a clean, sunny taste, slightly sweet. Another building is a gathering place. In the morning children can come for games or lessons. In the afternoons or evenings there are Catholic services, led by a Vietnamese priest. Loudspeakers perch above a few poles around the camp. The announcements are usually in Vietnamese. The place is large enough that I never see the edges, or if there are fences. It is wide enough that no sound seems large except when the loudspeakers go off.

The adults stand in lines to collect new numbers. I learn that my mother’s twin sister and her family are also here, a few rows of barracks away from ours, but not all of our relatives have arrived from the first place or will. I spend some time chasing around with my cousins and other kids I don’t know. Other hours I sit near the barracks, sneaking underneath their stilts to squat in the shade. One late afternoon, I am with my mother in front of the church-y building. The adults have crowded around. They each look as if they had just dropped something and watched it break. They are very quiet for such a large group. I clutch my mother’s pants, buried in the sea of legs, and hear the loudspeaker crackle. It is not the priest. A different Vietnamese voice begins the announcement and it goes on for longer than usual. There are murmurs but many more mouths are silent or moving soundlessly. I ask my mother what he’s saying. She leans her head and tells me with no more expression on her face than her usual furrow above the nose bridge, “Saigon bi mat roi.” Saigon is lost. “Viet Cong have the city.” Some years later when my father took us to parades protesting its anniversary, I would realize that it was April 30, 1975. In adulthood and living again in Saigon, someone would tell me that it had been eight days since we fled.

We land in the last place. A tall, thin white man is there to greet us. He has a wide smile and pointy noise, square glasses, and his sharp joints move with precision. My parents are glad to see him. The tribe has dwindled down to just the six of us. It is not as hot or dry as the first two places, the sky is punctured by the tops of buildings, and everywhere the ground is paved. There are no xe om revving or weaving in and out, just cars swooshing forwards, politely obeying lines on the road. At the end of a long drive, we pull up aside a boxy stone house on a silent street lined by trees with canopies six times as wide as palms. The house has three doors – one to a room jutting out at one end with walls of windows, one at the other end that opens onto a yard with grass. The third one is in the middle, behind a white arched gate. Dan Ross opens it and we inch into the beige foyer of his house. We are the first Vietnamese family to arrive in West Mt. Airy, Philadelphia. It is three weeks after we left, and two weeks before my seventh birthday.

Did you enjoy this? Then go here for the preceding chapterlet. 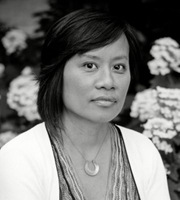 Hoangmai Pham was born in Saigon to North Vietnamese parents and immigrated with her family to America in 1975 at the age of seven.  She learned to speak English without an accent and has other markers of the model minority – degrees from Harvard and Johns Hopkins, medical training, a successful career as a researcher and federal health policy official. She lives in Washington, DC with her husband and two biracial sons.

Please take the time to rate this post (above) and share it (below). Ratings for top posts are listed on the sidebar. Sharing (on email, Facebook, etc.) helps spread the word about diaCRITICS. And join the conversation and leave a comment! Did this piece strike a chord? Have you enjoyed other works interweaving history and memory?