Christina Vo revisits Andrew Lam’s two previous memoir essay collections, Perfume Dreams and East Eats West, and previews his forthcoming fiction collection, Birds of Paradise Lost. After discussing Lam’s short story “Show-and-Tell,” Vo writes, “Through his upcoming work, though, I believe that his talent drafting beautiful, insightful prose is combined with an unleashed creativity that gives readers an opportunity to experience a very different Lam: a writer who can compellingly write non-Vietnamese characters, as skillfully as he can illuminate the Vietnamese.”

We last reviewed work by Andrew Lam in March 2012.

I recently revisited Andrew Lam’s two collections of short stories, Perfume Dreams: Reflections on the Vietnamese Diaspora and East Eats West: Writing in Two Hemispheres. It’s been a few years since I’ve read these books, so I was curious about how my perception of his work might have changed over time.

Still, when re-reading his work, I found his voice to be quite powerful. Some of his descriptions, particularly in Perfume Dreams, were so poignant, so precisely articulate about elements of Vietnamese culture that one would be amiss to say that Andrew Lam does not understand, embrace, and illuminate the Vietnamese, through the keen observations of a journalist and one of the most prominent Vietnamese American voices of the 1.5 generation.

In “Singing in the Family,” he writes about the uncommunicative Vietnamese:

When it comes to matters of the heart, my family, like so many others from Vietnam, is notoriously inexpressive. Something within our taciturn culture discourages verbal intimacy. Immigrants and refugees from Vietnam, we rarely ever communicate to one another what we really feel; our love and resentment are all hidden, our losses and sorrows often digested differently and alone.

Yet, I couldn’t let go of the feeling while reading his insightful stories that something was missing, namely that I wanted to delve deeper into his work. Perhaps, I am a selfish reader because I wanted more. But I couldn’t exactly put my finger on what it was I desired, since I wasn’t dissatisfied with the quality of the writing nor the storytelling. 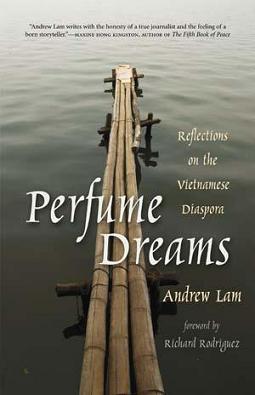 In an essay in Perfume Dreams, Lam writes about the impetus for his writing career:

When I began to write, it was not about the war or its aftermath. I wrote about my own broken heart. I tried to capture what it was like to lose someone who had been my preoccupation throughout my college life, who was then, in fact, my life. I was too close to the subject, as it turned out. Too hurt to do the story justice. But the raw emotions unearthed another set of older memories simmering underneath. To lose someone you loved dearly, someone with whom you created an intimate world, with whom you shared a private language and a routine, is to be exiled. Yet I have been exiled before. The brokenhearted adult found himself re-experiencing the emotions of the broken hearted child who stood alone on the beach of Guam, missing his classmates, his dogs, fretting about his father, wondering if he’d ever see his homeland again.

Lam, however, never discloses to his readers the entire story and we are kept a safe distance from the ‘brokenhearted adult,” which could simply have been a result of limitations nonfiction writers place on themselves to protect the characters in their lives. Or, Lam could have deliberately withheld bits and pieces to incorporate into his work later.

On August 9 at the California Historical Society, Angie Chau and Andrew Lam were invited to read from their latest collections and discuss Vietnamese literature and identity. Chau read from Quiet As They Come, her book of short stories about Vietnamese refugees who have settled in the Bay Area. Lam, claiming that he has read personal essays from when he started his career as a professional, gave us a glimpse of Birds of Paradise Lost, a collection of fiction short stories that will be published in the spring of 2013.

In “Show-and-Tell,” Lam’s main character is not Vietnamese, but a boy around 10 years old, who is tasked by the teacher to show the Vietnamese refugee, Cao Long Dinh, around school on his first day. Robert asks Cao about his shoes not knowing what else to talk to him about, Cao responds to questions in his broken English, Robert and Cao dodge the Billy, the bully, who makes a point of sharing that his father fought in the Vietnam War.  Billy teases Robert and Cao, saying Cao is a Viet Cong and Robert is his new boyfriend. Robert teaches Cao to respond to anybody who is bothering him by saying, “Hey, fuckheads. Leave me alone.” And Robert, never stops calling him, Cao Long Dinh, “refugee.” By the end of the day, after dodging Billy and perusing comic books, the boys seemed to have bonded and have found their own way to communicate with each other, language barriers aside.

During show-and-tell, Robert brings in his father’s old uniform and talks about the scars and wounds his father received from fighting in the Vietnam War. Cao, in response, in the only way he can truly communicate, begins to draw on the chalkboard, and calls upon Robert to translate the story to the class. He scribbles, Robert explains. Cao shows a boy on a buffalo, and then another boy on a buffalo. A couple holding hands, with the words ba and ma written underneath. The surrounding area is filled in with a river flowing into the ocean. Then there’s a soldier taking his dad away, his dad behind a barbed wire fence with chains on his ankles. A small boat, an island, and an airplane. The next image is a map of America, skyscrapers, the TransAmerica building, and then Cao puts a heart around both – the scene in Vietnam and in America. Robert continues his explanation of Cao’s story of leaving Vietnam and starting anew in a foreign land with beauty, compassion, and understanding.

“Show-and-Tell” is a sweet, simple, and affecting story with characters that are wonderfully alive, raw, considerate, and generous. And while the common theme of the Vietnamese diaspora is the background of Lam’s story, there is also a new and subtle strength in his characters. Listening to Lam read on that day (even laughing at the very characters he created) led me to the belief that Lam’s best is yet to come, and perhaps gave me some clarity about how through his nonfiction writing, Lam understood, embraced, and captured his own history—his trajectory from the little boy in Vietnam to the award-winning writer in California. Through his upcoming work, though, I believe that his talent drafting beautiful, insightful prose is combined with an unleashed creativity that gives readers an opportunity to experience a very different Lam: a writer who can compellingly write non-Vietnamese characters, as skillfully as he can illuminate the Vietnamese.

This is the Andrew Lam I’ve been waiting to read.

Christina Vo is a San Francisco-based writer. She studied public health at UNC Chapel Hill and social and public communications at the London School of Economics. After living and working in Vietnam for a number of years, Christina happily calls San Francisco her home. Currently, she is a writer for the UCSF Foundation, and is working on her first book.

Please take the time to rate this post (above) and share it (below). Ratings for top posts are listed on the sidebar. Sharing (on email, Facebook, etc.) helps spread the word about diaCRITICS. And join the conversation and leave a comment! Have you read Andrew Lam? What did you think of his nonfiction? Do you look forward to his fiction collection? Why?