In the transformART: Reduce, Reuse, Recycle, Reimagine exhibit, running from November 2 to 17, 2012, at the Vietnamese Arts & Letters Association in Santa Ana, California, twelve artists exhibit work made from found, recycled, or repurposed materials. Philosophically, politically, and aesthetically this exhibit is an interesting concept, curated by James Dinh, and the first exhibit of its kind within the Southeast Asian American community. Here’s some information on transformART, including the opening and closing receptions, and short bios of the curator and artists. Go see it if you’re in SoCal. 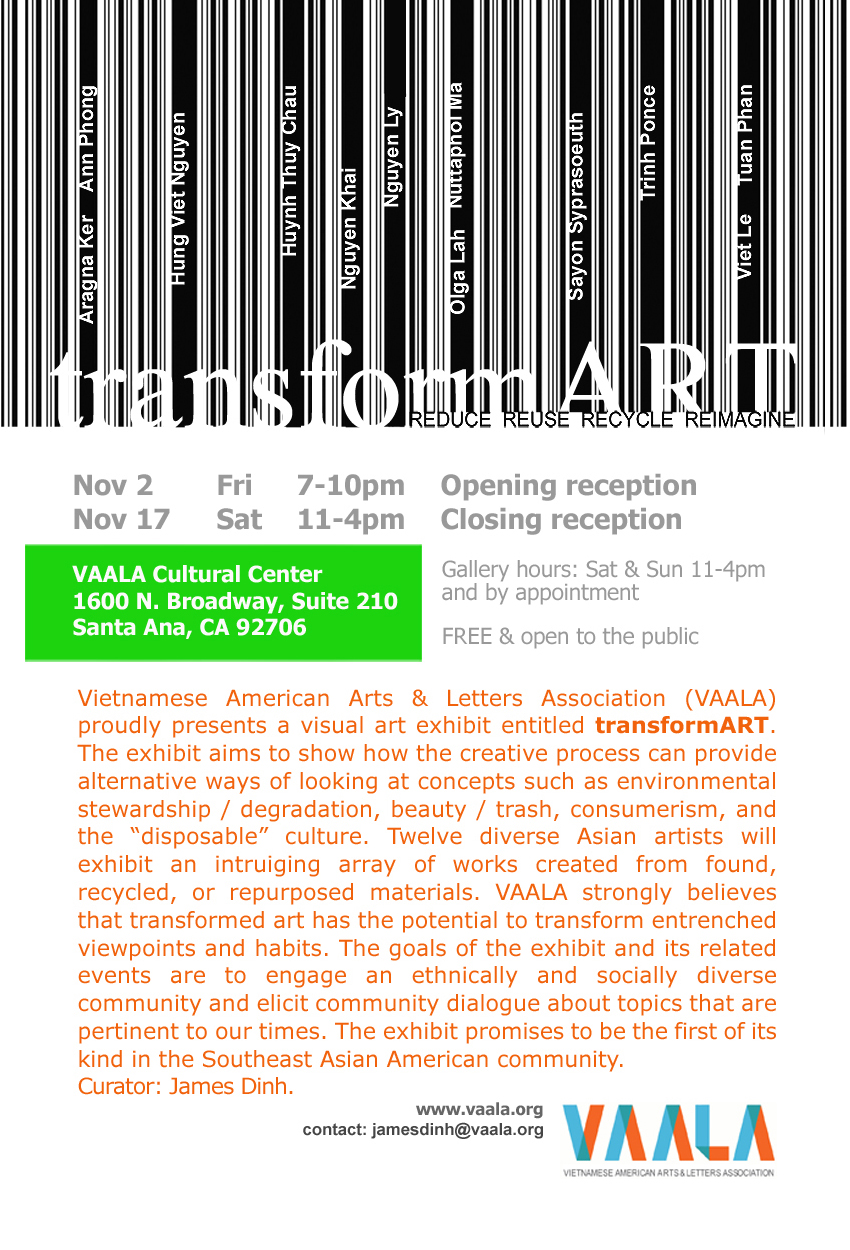 The Vietnamese American Arts & Letters Association (VAALA) proudly presents a visual art exhibit entitled transformART. The exhibit aims to show how the creative process can provide alternative ways of looking at concepts such as environmental stewardship / degradation, beauty / trash, consumerism and the “disposable” culture. Twelve diverse Asian American artists will exhibit an intriguing array of works created from found, recycled, or repurposed materials. The artists include: Ann Phong, Aragna Ker, Hung Viet Nguyen, Huynh Thuy Chau, Nguyen Khai, Nguyen Ly, Nuttaphol Ma, Olga Lah, Sayon Syprasoeuth, Trinh Ponce, Tuan Phan, and Viet Le. VAALA strongly believes that transformed art has the potential to transform entrenched viewpoints and habits. The goals of the exhibit and its related events are to engage an ethnically and socially diverse community and elicit community dialogue about topics that are pertinent to our times. The exhibit promises to be the first of its kind in the Southeast Asian American community.

With the proliferation of inexpensive and poorly made products manufactured mostly in third-world countries, the U.S. (and much of the modern world) has developed a “disposable culture”, in which we easily throw things away in the trash without much thought or guilt. “One goal of the exhibit is to highlight this reality, but in a positive way by showing how creativity can be used to transform trash or found materials into things that are visually and intellectually engaging,” James Dinh, the curator of transformART exhibit, says.  “Some of the artists were selected because they typically incorporate recycled materials in the works; whereas other artists were selected because they had never worked with found materials before and were excited by the challenge.”

James Dinh received his M.L.A. (Master of Landscape Architecture) degree from UC Berkeley’s School of Environmental Design. He currently works as a landscape architect, designing private and public open spaces. He also heads up Studiodinh, a multi-disciplinary design practice that engages with large and small projects, from site-specific environmental installations to graphic design.

Aragna Ker is a native of Phnom Penh, Cambodia. Born in 1974, he immigrated to Southern California in 1981, at the age of six. After graduating high school, Ker relocated to attend San Francisco Art Institute and graduated with a BFA in painting in 1999. In 2004, he received his MFA in sculpture from Claremont Graduate University. Essential experience serves as springboard for Aragna’s methodology. His playful works fuse cultural symbols and myth to explore the vast range of hybrid identities. His drawings and sculptures utilize the potency of motive to curiously attack simplistic materials. The United States Embassy in Cambodia, the Hammer Museum, the Torrance Art Museum, the Los Angeles Zoo, the Pacific Asia Art Museum, Happy Lion Gallery and Sabina Lee Gallery are some of the establishments at which he has exhibited. Aragna is currently employed as an Art Instructor at First Street Gallery Art Center in Claremont, providing artistic instruction to adults with disabilities.

Huynh Thuy Chau graduated from U.C. Berkeley, majoring in fine arts and social welfare, and received her M.F.A. from UC Davis. Her artwork is in a constant process of change as each project represents her intentions to understand and use past experiences. She often employs found and repurposed materials in her artwork.

Nguyen Khai was born in Hue, Vietnam in 1940. He graduated from the National School of Fine Art in 1963 and is a founder of the prestigious Association of Young Vietnamese Artists. After escaping by boat to Indonesia, he and his family chose California for resettlement. Nguyen Khai has exhibited internationally in Vietnam, Paris, Tokyo, Tunis, Sao Paolo, New Delhi, Houston, Virginia and Florida. His local exhibition credits include shows in Tustin, Garden Grove, Westminster, Irvine, Costa Mesa, Cypress, Torrance, Los Angeles, Burbank and San Diego.

Nguyen Ly is a multimedia artist and art educator with a focus on printmaking. He has exhibited throughout California and in locales as diverse as Springfield, Missouri, and Guadalajara, Mexico. Born in Vietnam, Nguyen is a member of the Latino printmakers’ network Consejo Gráfico and the printmaking collective Los de Abajo.

Nuttaphol Ma is a multi-media artist originally from Bangkok, Thailand. He received a B.A. in economics from the University of California, San Diego; an M.B.A. from Thunderbird School of Global Management; a M.Sc. in architectural conservation from the University of Hong Kong; and an M.F.A. in installation from Claremont Graduate University. He has received awards from the California Community Foundation Irvine Fellowship, Feitelson Arts Fellowship, Armory Center for the Arts Honorarium, Richter Watson Fellowship Fund, and the Walker / Parker Memorial Fellowship.

Olga Lah is a student of both art and theology. A Fuller Theological Seminary graduate, Lah was the 2010 recipient of the Getty Multicultural Intern Alumni Award as well as the American Association of Museum Conference Fellowship. Using humble materials in repetitious labor and craft, she seeks to question perception and the nature of reality, “after a kind of precarious monumentality.” Her sculpture and installations engage the viewer in a sensory experience said to remind us of our own physicality.

Sayon Syprasoeuth is a mixed-media installation artist living and working in Garden Grove, California. A survivor of the Khmer Rouge, he and his family escaped Cambodia under the protection of the night sky to Thailand, where they lived in multiple Thai refugee camps. His artwork is influenced by stories and folklores told by village and by stage theater. Sayon graduated from California State University Long Beach in 2003 and Claremont Graduate University in 2007 with an M.F.A. His works have been shown in Phnom Penh, Cambodia; China; Berlin; Los Angeles; and throughout the United States.

Trinh Ponce uses natural materials such as plant fibers to create metaphorical shapes that force viewers to make their own interpretations, and in this process they form an emotional connection with the artwork. Born in Vietnam, Trinh and her family relocated to the United States in 1987. While studying graphic design at California State University, Long Beach, she developed an interest in fiber arts. In 2003 she graduated with a BFA degree in fiber arts and 3D design.

Tuan Phan is a Vietnamese-American artist who considers the human body to be a metaphorical map that physically charts the course of personal journeys. Phan associates his artwork with Buddhist teachings about life and death, reminding viewers that their physical existence on earth is impermanent. Tuan received a B.A. in art with an emphasis in drawing and sculpture from California State Polytechnic University, Pomona, and an M.F.A in Studio Arts with emphasis on painting from California State University, Los Angeles.

Viet Le is an artist, academic, creative writer, and curator. Viet received his M.F.A. from the University of California, Irvine, where he has also taught Studio Art and Visual Culture courses. He received his Ph.D. from the University of Southern California and is currently a postdoctoral fellow at Academia Sinica, Taipei. He has received fellowships from the Civitella Ranieri Foundation, Fulbright-Hays, William Joiner Center, Fine Arts Work Center, Center for Khmer Studies, and PEN Center USA.

Please take the time to rate this post (above) and share it (below). Ratings for top posts are listed on the sidebar. Sharing (on email, Facebook, etc.) helps spread the word about diaCRITICS. And join the conversation and leave a comment! Have you seen these artists’ or curator’s work before? Do you plan to attend the exhibit? Are you an artist who reuses material? How so? How does it impact your aesthetic and practice?

Socio-cultural, literary, and political news and events relating to Việt Nam and to the Vietnamese diaspora. ■ News from the Diaspora ■ ►San Jose: Fear lingers...
Read more
In the Diaspora