Birth of a Vietnamese Novel

David Joiner, author of Lotusland, shares how living in Vietnam inspired his journey to become a writer. 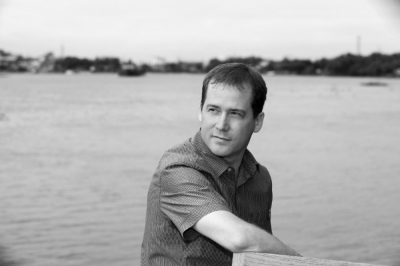 My “writing life” and my “working life” have intersected off and on for roughly half my 10 years in Vietnam. People often ask me, “What do you write?” and, even more, because I’m an American, “Why Vietnam?” Well, I write novels, mainly. Or at least I’ve written one that’s going to be published. But I couldn’t have written it without having spent so much time in Vietnam. In fact, Vietnam is the setting for my novel, and many of my characters are Vietnamese. But this doesn’t exactly answer the question “Why Vietnam?” Let me explain.

To start, I never considered becoming a writer until I was 25. Not until I turned 24 and found myself living in the Vietnamese countryside––the only American and one of only two native English speakers in Dong Nai province––did I become a serious reader. There was little else to do during those 12 months but immerse myself in books. In 1994 there was no Internet in Vietnam, I didn’t have a TV, and I lived 12 km by one-speed bicycle from the center of town. Naturally, I turned to books. I’m convinced that had it not been for that year volunteering in a slow, countrified environment, where I had few distractions and the life most familiar to me was contained in novels stacked on a small bedroom bookshelf, I never would have become a writer.

But the odds were perhaps greater than that. I come from a family of scientists; I was an underachieving student most of my life; I majored in Japanese Studies; I never took either a creative writing or a literature course in college; a graduate school professor failed me in a literature seminar and told me repeatedly that I’d never become a writer (and then harassed me until I graduated); I’ve lived in publishing hinterlands for most of my adult life; queries to literary agents have been ignored by the dozens; I’ve been rejected by the publishing industry too many times to count; I was married to a woman who admitted to trying to sabotage my writing career. My list goes on. Clearly, I wasn’t born on an easy path to literary anything.

I have lived and worked in Vietnam seven separate times and have spent more than ten years here. I visited the country on four other occasions, usually while on holiday. The first time I lived in Vietnam, from 1994-95, I brought from America two suitcases filled with clothing, health supplies, cassette tapes, teaching materials, and books. I must have packed more than thirty books––novels, essay collections, and story anthologies.

With little to do in my free time, and occasionally needing to retreat from an intensely foreign setting, I sailed through my reading material in half a year. When I traveled in Vietnam, I acquired used and photocopied books from sidewalk vendors and hotel lobbies and devoured them. By the end of that year I had also filled a notebook with similes and metaphors that I imagined were brilliant (they weren’t) but had little use for since I had come up with them outside the context of any narrative. Filling this notebook, “useless” though it was, represented another important step in becoming a writer. I was imagining myself as a writer, and though I look back on that effort with some embarrassment, there’s no denying that I began to feel more confident expressing myself on the page. I even began to believe that with hard work I might actually publish something.

Each time I have been to Vietnam, the country has given me something different, something more, something valuable. Although there were Vietnamese novels and poetry collections that I came across and relished reading, it was life in Vietnam that influenced the writing of my own novel. By this I mean, in addition to my own lived experiences, the people I got to know, the stories they were kind enough to share, their attitudes and behaviors that I came to understand and respect, and certain aspects of their culture that over time I absorbed. And of course there have been causes in Vietnam that I have supported, one of which––the horrific legacy of Agent Orange––found its way into my novel.

But looking back, I see that what Vietnam has given me most of all are chances. Chances to live on my own in a foreign country; to see America from as far away as one can get from it; to read, write, and develop a serious appreciation for stories and the written word; to explore the country with one eye open to the land I wanted to describe and another eye open for stories I could tell; to make my living as an editor and writer, and to develop ideas for novels; to write those novels; to find a publisher; and to consider any number of new starts for myself.

In my 21-year relationship with Vietnam, I have gained knowledge about the country, its people, and its culture, and I hope I have given back, even beyond my early years as a volunteer teacher. And I hope my book is another way to give back––a way to share with others a Western perception of Vietnam at a specific point in its long, tumultuous, but always fascinating history.

No country is perfect, and Vietnam is no exception. But given my interests in novel writing, I can think of no better place where I could have spent the bulk of my time creating. Writing a novel takes time. More than that, it requires mental energy, and Vietnam gave me the chance to earn just enough to focus my real attention on writing.

Will Vietnamese people like my novel? It’s hard to answer that since my novel will be published in English, but hopefully some will if one day they have a chance to pick it up. If the book touches them, that will be the greatest gift I can offer––an author’s expression of gratitude for so many opportunities extended to him over the years.

David Joiner was born and raised in Cincinnati, Ohio. He has lived and worked in Vietnam seven different times. David has spent more than 10 of the last 20 years in Vietnam, making his home in such places as Saigon, Hanoi, Mui Ne, and Bien Hoa. His debut novel Lotusland was published in March 2015 by Guernica Editions. He currently lives in Kanazawa, Japan, where he is working on a second novel set on the Mekong River in Vietnam and Cambodia.