Out of the Margins

OUT OF THE MARGINS :: Bao Nguyen

We feature fiction by a young and upcoming writer, Bao Nguyen, for this month’s Out of the Margins. More than four decades after the war in Vietnam, unexploded ordnance still litters the landscape of, not just Vietnam, but much of SE Asia. To call the war “over” may be a relative term–relative to your geographical location–as attested to by munitions-clearing workers in Vietnam (written about in this New Yorker article)–a life-threatening profession, on a daily basis. Bao Nguyen’s short story, “UXO”, was written in homage to such realities.

While the war may be ended in official and political terms, and wished-to-be ‘forgotten’ by many, its repercussions – both material and immaterial – continue to resound. The younger generation is listening, inheriting, retelling, re-inhabiting. (Side note: see here, a recent glimpse of an experimental hip-hop artist of Laotian descent also acknowledging this inheritance.) Credit for the graphic below goes to Huy Cao, www.huycao.com. 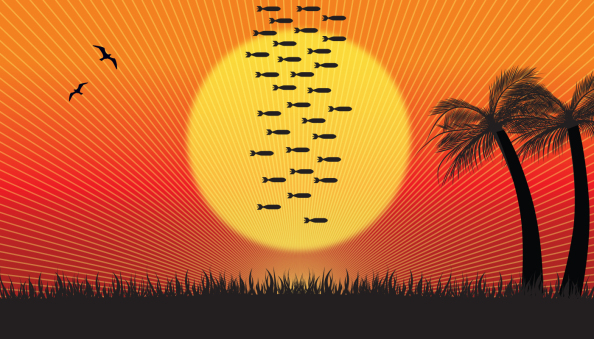 He saw the flash. It was very bright. But because it was so small and short-lived, it was imperceptible to his colleague standing a few yards away. The companion was squinting in his direction, one hand cupped overhead in defense against the blazing midday sun, tracking each careful and deliberate step along the path they had mapped out yesterday. It led toward a batch of little triangular orange flags rising a few inches above the dirt. From a distance, it almost looked like a bed of flowers.

He immediately recognized the glimmer for what it was. It came to life right when his left boot touched down three feet away from the nearest waving plastic blossom. The spark resembled those seen in animations showing how neurons work. They’re often depicted as bright electrical signals propagating along thin strands of nerve cells. One of their major functions is to pass along information when the senses are stimulated to create or recall memories.

Here, the spark made its way from the ground to the corner of his eye and snaked toward his visual cortex, down a neural pathway that was built nine years ago when he began working on a project to clear unexploded ordnance, or UXO, left over from the war. He had first seen it in the training videos and then very clearly in person at the disposal operations, where discovered munitions are gathered and deliberately destroyed by allowing them carry out their sole purpose: blowing up. He was never able to describe the spark to another person, but he always knew exactly what it looked like.

The chain reaction in his brain continued, hitting replay on one particular footage. It showed a series of B-52s releasing torrents of bombs that seemed to go on forever. It was called carpet bombing. His high school history teacher had told him that more ordnance was dropped on his province than was dropped on all of Germany during World War II. He didn’t quite know how big Germany was so he looked it up later that day and found out just how minuscule his world was. In later training sessions, he learned that millions of those bombs and rockets and mortar shells never blew up and that they still contaminate over 80% of the region.

Along with the videos, he received hands-on training from international experts in the detection, removal, and disposal of UXO.  He didn’t know there was such variety to them, ranging from hand grenades to projectiles as big as cars that were fired from warships miles offshore. One particular type, called cluster bombs, was especially interesting to him.

The cluster refers to the 600 or so bomblets that are packed into a larger delivery pod. Before reaching its intended target, the pod opens in midair and showers the ground in hundreds of orange-sized metal balls, which then burst into thousands of pieces of shrapnel. They were indiscriminate, tearing into anything in their way, be it enemies or civilians. He remembered hearing the word “motherload” and scoffing.  He didn’t think there was anything maternal about them.

He was one of the first recruits on the team but he quickly became adept at his job and, in a few years, was promoted to be the team leader. His regular work was to survey and decontaminate areas for future development. Once in a while, he would receive a call that a farmer or a child had found “something” in the fields where they work and play. He would assemble his team and go out to investigate. The routine was deceptively simple when he explained it: expose, identify, remove.

The flash he saw was gone in an instant, but by then, the earth in front of him was already airborne, hurling spears of dirt and gravel in all directions. It was another image that had been seared into his mind after conducting so many disposal operations. But he had never been this close to it.

A fraction of a second later, after the initial shockwave had already rippled through his body, the first clumps of dirt touched his sweaty skin and entered his eyes and nostrils. This, too, was intimately familiar to him. He knew the soil of his province like he knew how to breathe. In fact, his lungs probably contained a good amount of it from the many times when, like an anthropologist excavating ancient burial grounds, he got down on his knees and, with a brush, or sometimes his own steady fingers, gently swept away the dirt to uncover what lay beneath. He would then look for clues to determine whether it was safe to be physically removed or if it needed to be disposed of on site.

Back then, it made him feel good to know his community and his people were a little safer after each operation. He kept stacks of educational pamphlets from his organization, to pass out to the farmers and children in nearby villages. The pamphlets included pictures of maimed bodies and amputated limbs as a warning against UXO. Over 40,000 people had been killed, it said, and many more injured. He wished bombs were made with these warnings on them, like the pictures of blackened lungs on the cigarette carton in his shirt pocket. Maybe the kids wouldn’t play with them. He wondered if that would really work anyway. It didn’t stop him.

When his own children started asking about his job, he didn’t really want to tell them. Instead he showed them the protective equipment he has to wear. It consisted of heavy kevlar plates covering his torso and legs and a helmet with a large plastic face shield. He would put on the beige colored suit and helmet, holding the metal detector to look like one of the Ghostbusters, and he told his kids that he catches ghosts and gets rid of them so people can live in peace.

In many ways, he wasn’t lying to them. He genuinely believed in the undead; it’s part of his culture. Deep in his childhood memories were stories his uncle had told about the malevolent spirits of those who died unfairly, or in rather grisly manners, coming back to haunt the living, sometimes killing them by pushing them down wells or dropping coconuts on their heads. For years, he avoided walking under coconut trees on his way to school.

One time, his daughter asked him why people choose to live with ghosts in the fields and rivers. He said that no one really wants it that way. They must do so in order to eat and it was his job to make sure the ghosts don’t bother anyone.

Eventually, he began to think of himself as a kind of ghost whisperer, soothing the angry souls of the previous generation, trapped within their iron coffins. This narrative made it easier for him to relate to the many American vets and volunteers who regularly visited his province to observe his work. He figured they were also there to hunt down their own ghosts.

In the milliseconds that it took these memories to course through his head, the dark cloud had surrounded him and turned everything dark. He felt something unfamiliar, a strange sensation. It caused a set of neurons to rearrange themselves, forming a new network, a new, final memory.

Bao Nguyen was born and raised in Saigon before immigrating to Seattle, WA where he has lived since the mid-90s. Far from a trained writer, Bao instead plays around with words like a child experiments with Lego bricks. Every now and then, he manages to make something neat. He is pursuing an M.S. in Leadership for Sustainability at the University of Vermont and is the Editor-in-Chief of Xin Chào Magazine, a community based publication that aims to share the Vietnamese-American experience and perspective.

My counselor asked me if I’ve had any traumatic experiences lately. This was 12 minutes into our first meeting, after he asked me to rate my happiness, on a scale from one to ten.
Read more
Literature

“And I ask him if he’s found it yet.” by Melanie Ho

He bought a convenience store instead. It belonged to an Indian man who would light incense every morning with his palms pressed firmly together, bowing his head not in front of pictures of his deceased grandparents like we do but in front of the cash register.
Read more
Essays

Our conversations are limited to my third-grade level comprehension so I can tell you to eat your dinner and drink your milk or to change your clothes, but we cannot discuss the difference between inductive and deductive reasoning. We don't talk about where you go after death because I don't know the word for heaven or how to explain reincarnation.
Read more