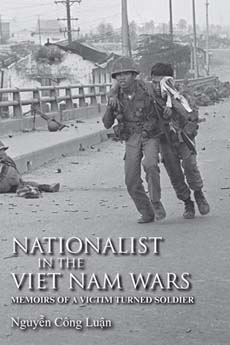 Each page of Major Nguyễn Công Luận’s memoir, which is forthcoming in Vietnamese in January of 2018, “Nationalist in the Việt Nam Wars,” was penned with his desire, driven by loyalty and duty above all else, to provide a history of Việt Nam that came not from the mouths of American veterans, journalists or scholars, or communist Việt Nam, but from the lips of a pro-South Việt Nam “no-body” such as himself.

This “no-body” describes himself as nothing more than a “common person” who had given all of his heart to the Republic of Việt Nam (ARVN) army, but has not “contributed anything great to my people nor my army.” And so Luận set out on his journey to share his experience at a time when his colleagues were still reticent to share their own stories.

Foreseeing the need for a comprehensive personal account that would fill in the gaps missing from the dense, politically, charged memoirs of other ARVN veterans, Luận offers an honest and candid narrative in his sweeping memoir that begins on a blistering sunny day in a provincial town thirty miles north of Hà Nội, Vĩnh Yên, which Luận defines “small and insignificant. ”

Luận sets the tone of his memoir as he notes his own ironic ability to observe the beauty of rice paddies as African Legionnaires, who were themselves conscripted unwillingly into the French army, began their raid, search and pilfering of his village. This same notation of beauty and humanity is provided in nuggets throughout Luận’s memoir as he pauses from time to time in his retellings to appreciate some fact – mostly the personal sacrifices of people in his life. 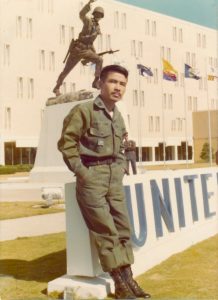 Born in 1937, Luận’s memoir dives right into the horrors of French occupation where living under French military authority did not protect villagers from being “looted, raped, tortured, or killed” by French soldiers. Unforgiving in his accounts, and told with an uncanny memory for numbers, Luận walks the reader through the atrocities of the civil war that tore through Việt Nam during the resistance to French colonialism, the Japanese Occupation during World War II, and the growing tyranny of the Communist movement.

At the core of Luận’s memoir is the story of the development of the “Nationalist” movement in North Việt Nam alongside other political parties including Ho Chi Minh’s Việt Minh, to fight for the independence of Việt Nam. Here, unlike any other memoir I’ve encountered, the reader will experience first-hand the establishment of competing political parties in Hà Nội, including the Việt Minh (the predecessor to the Communist Party of Viet Nam), and other Nationalist parties, namely the Việt Cách, Việt Quốc, and the Đại Việt. The casualty of these movements can be seen in Luận’s heart-wrenching account of the slow death of his father, a member of the Vietnamese Nationalist Party (Quốc dân đảng) in a Việt Minh concentration camp, an event that, no doubt, fed his own patriotism and anti-communism.

At the heart of all of these parties was fierce patriotism on either side. Luận sums up the magnitude of patriotism to a Vietnamese: “Patriotism at the highest degree gives to some an almost unimaginable will to survive, but it also encourages people of the same forefathers to kill their compatriots more eagerly and savagely. That is the reality of the armed conflict from 1945 to 1975 in Việt Nam.” Luận is referring, no doubt, to incidents such as the August Revolution of 1945 when the Vietnamese Communist rose to power allowing them to enforce brutal and tragic strategies to eliminate their Nationalist rivals.

The rise of communism in North Việt Nam led to the eventual division of the country – physically and ideologically. Fleeing with millions of other people, Luận left North Việt Nam when the country was partitioned into North and South following the 1954 Geneva Accord. Despite the fact he was exempted from conscription, a sense of duty drove Luận to enroll in the Republic of Việt Nam Military Academy where he joined as a cadet in October of 1955. He rose through the ranks to serve in multiple capacities: the head of the Reception Directorate of the Republic of Vietnam Chiều Hội Ministry for defected communist soldiers and the chief of the strategic study and research division of the General Political Warfare department. He achieved the ranking of “Major,” the U.S. equivalent of which is “Lieutenant Colonel.”

Foregoing the chance for advancement and promotion, Luận made a concerted choice to stay at the ground level to fight Communists head on. Luận’s chilling accounts provide a glimpse into the heart, courage and sacrifice of the often maligned and misunderstood South Vietnamese ARVN soldier – up to and including the suicides committed by ARVN soldiers at the Fall of Sài Gòn. A patriot until the end, Luận, returned to Việt Nam close to the Fall of Sài Gòn from officer’s training in Fort Benning, Georgia, despite being offered refuge in the U.S. He was hoping to join in the efforts to prevent the country’s predicted demise. For his deep loyalty to his country, he was “rewarded” with imprisonment in Communist Việt Nam’s notorious “re-education camps” for six years and seven months, the details of which can also be found in his book.

Throughout his memoir, Luận also provides readers with his honest and candid assessment of missteps during the Việt Nam War that lead to the Nationalists’ loss. Though not a political analyst, Luận’s nuanced analysis of the successes and failures of the South Vietnamese government from the vantage point of someone in the ranks is significant to understand how the people felt as their country fell. In addition, his harsh discussion of the ceasefire negotiations with the North Vietnamese reflects the sentiment of many Vietnamese who mistrusted the negotiations and the actions of President Richard Nixon and Henry Kissinger in blind-siding the South Vietnamese.

Like many of my generation, I came to “Nationalist in the Việt Nam Wars” in search of something I was missing: clarity about what I had lost. What I had was a symbol and a feeling. The symbol was the bright yellow flag of the Republic of Vietnam with its three harmonious red stripes. The feeling was one of deep sorrow for a loss I knew very little about.

In the pages of “Nationalist” and in an interview with the late Nguyễn Công Luận, I found what I was looking for: a detailed epic sweep of the history – both political and deeply personal – of the Việt Nam my parents could only silently weep for.

“I was just a nobody,” he repeated to me several times when I had the honor of sitting with him in the winter of 2016, just two months before a heart attack spirited him away. This sentiment was repeated often throughout his memoir: “I’ve done nothing important,” Luan writes. “Neither have I strived to make myself a hero.” And yet, the 574 page tome that is Luận’s memoir will be one of the most significant sources for our generation to both learn our history and to connect to the Republic of Việt Nam that our elders all loved so much – and lost so long ago.

Nationalist in the Việt Nam Wars: Memoirs of a Victim Turned Soldier

Zora Mai Quỳnh is a gender queer Vietnamese literary poet and writer whose short stories have appeared in the Anthologies: “The Chamber of Souls” – The SEA is Ours and “The South China Sea” – Genius Loci: The Spirit of Place. Her short story “The Chamber of Souls” was translated and featured in the Czech version of the “The SEA is Ours” anthology. Her short story, “The Seashell” was nominated in 2015 for a Sundress Best of the Net Award for fiction, given honorary mention by the literary magazine, Glimmer Train, and was featured in APAture 2016. Her essay “On the Topic of Erasure” was published in the Anthology, “People of Color Destroy Science Fiction.” Her creative non-fiction essay, “Meta Eulogy: Nguyễn Ngọc Loan By A Vietnamese American,” published at DiaCRITICS, was nominated in 2015 for a Sundress Best of the Net Award for creative non-fiction. Her essay, “Octavia Butler – Master Cultural Translator” is forthcoming with Twelfth Planet Press and her short story, “Drink Brother for the Pain…” is forthcoming in Kweli Journal. She was a finalist for the 2014 Barbara Deming Writing Grant.